In all my adult life, I cannot recall ever stepping foot into a butcher shop (a real butcher shop, that is). There may have been moments when I was a kidlet that I had the opportunity to visit one, but my memory is pretty darn good, and I don’t recall any from that time, either.

But, during the Big Bash, one of my aunts recommended that I stop into a local butcher shop and check out what the guy had to offer. So I did. The answer: after noon, not a lot that was of interest. I spied some frozen filets mignon that looked as if they’d been there since the beginning of time, quite a bit of bacon, and a huge 17-pound pork butt package (two butts in the package, as is common with boneless butts). One of the more amusing factoids I’ve always carried around in my head is that regarding the term “pork butt”. It is not, as the name might suggest to the unwary, really the ass end of the pig. Rather, it is the upper shoulder of the animal (the picnic is the lower shoulder). Quite a lot of people may know it as a Boston butt instead.

In any case, a nice butt – of the porcine variety, in today’s journeys – was my goal. While the package I saw at the first butcher was hefty and looked nice, I decided to bypass that one and continue my search.

Before I did that, however, I decided to find a restaurant supply place nearby. I do need a few things that would make life easier, especially when entertaining large gathering, such as some half sheet pans and hotel pans. And of course, there is always that siren song of kitchen gear. I should consider myself lucky that my obsession is with this sort of thing rather than with something more self-destructive, like drugs or drink. However, despite my fondness for a number of items I saw, I bought nothing this trip, as I need to get some things in order in the kitchen first.

With my head filled with ideas about how to do that, I trundled myself off to a bookstore to pick up a couple of odds and ends. Before I could make it into the store, though, I was sidetracked by a place called World Market, which has a lot of interesting goodies of the food variety. This particular location has an incredibly large wine selection, something I did not expect from an outlet of this nature. If I could actually drink wine at the moment, I’d probably be inclined to take a closer look at their offerings. Another time.

After getting my fill there and at the bookstore, I decided it was probably time to eat, and chose a place I’d never been to (and had never heard of): Mama Fu’s Asian House. Turns out, this is a franchise deal, and after looking over the menu and trying some chicken lo mein, isn’t much better than my local Chinese takeout place. In fact, I’d say that my little hole in the wall Chinese place is better. The bowl was huge, and the food was hot, but the noodles were gummy and didn’t taste like much of anything at all. So I ate this while starting to read Two for the Road, where the authors hold the same opinion as I always have about the South: it’s a pig’s world. There is nothing quite like barbeque pork in all its forms. 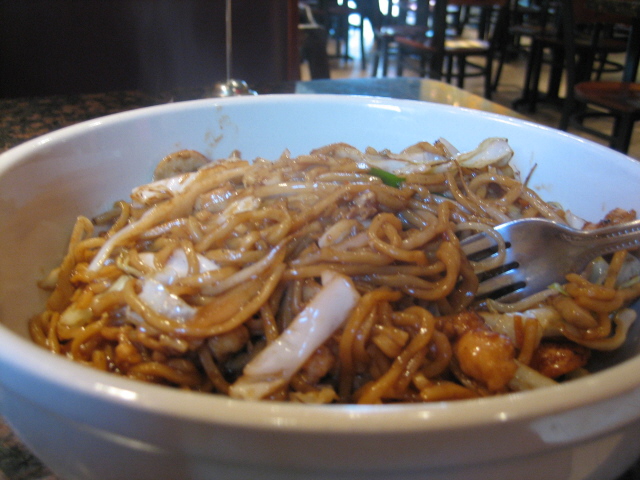 I didn’t eat very much of the lo mein – I don’t genreally eat a lot of any meal these days, since my eating is quite a lot like that of a gastric bypass patient. This makes it a tad difficult to do a full review of a place as I used to, but I think I can say without too much quibbling that I won’t go back to Mama Fu’s. There are a lot of places out there to try, after all.

From there I headed to another butcher shop. When you walk in to this place, the smell of smoke greets you: they smoke their own meats there. Unfortunately, their butt selection was meager, consisting of a couple of small Boston butts. The steaks looked nice, I have to say that, and the place was clean. But once again, I left without purchasing.

I decided to go back to CostCo, which is where I had gotten the almost 30 pounds of spare ribs for the Bash. Large, boneless butts are fairly common in the big warehouse places like CostCo and others, and I was not disappointed: they had a great selection of packages, ranging from 13 to 16 pounds, untrimmed. I decided that I would return on Friday to pick up a package along with some more spare ribs. I also saw these on my walk about the place: 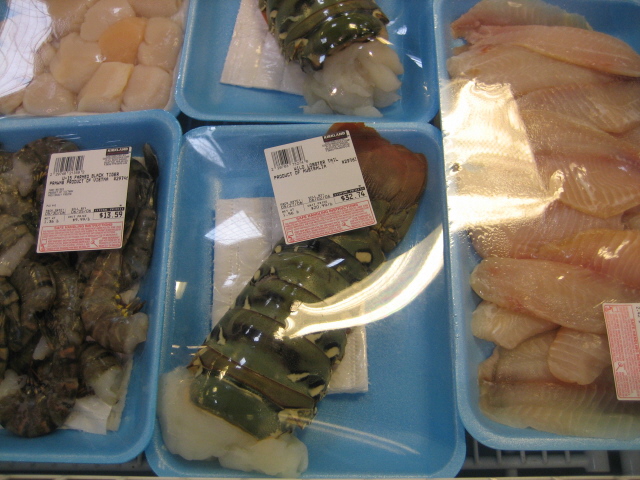 Those, Gentle Readers, are wild lobster tails, from Australia, weighing in at over a pound and half each. 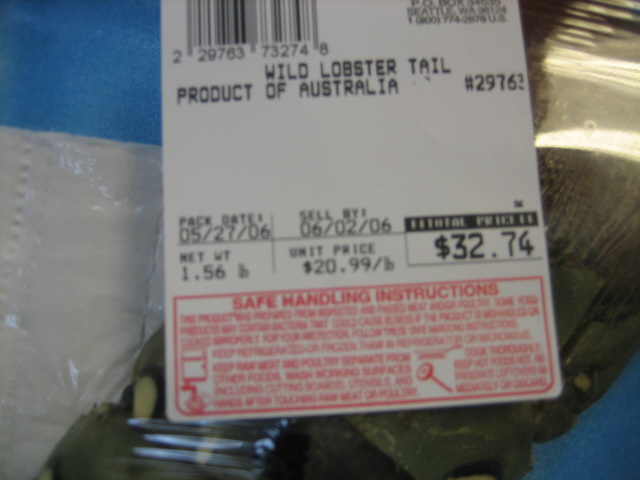 It was tempting, but I resisted, and left them where they were.

Since it was about time to eat again, I headed for the huge outdoor mall that some genius decided would be a good idea for Florida in the summertime, to see what place that I’d never been would be serving me lunch. That wound up being a place called Mimi’s Cafe, which serves breakfast, lunch, and dinner every day. I was looking for something small, since restaurant food tends to be so huge and there’s no way I can eat an entire portion these days. I settled on this. 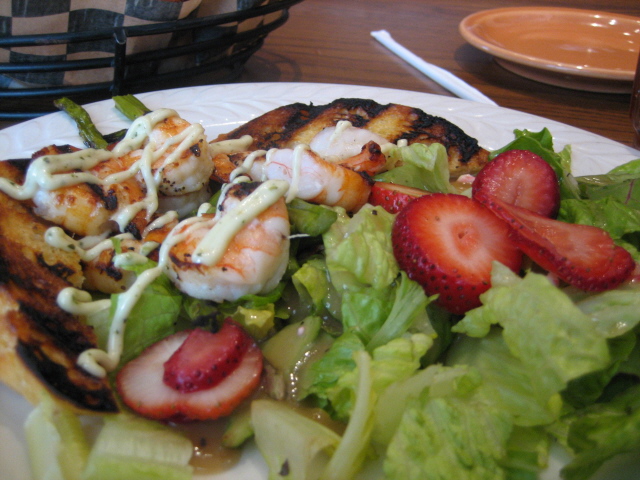 Citrus broiled shrimp with asparagus and a basil pesto and mixed greens with strawberries and balsamic vinaigrette. It also came with bread. 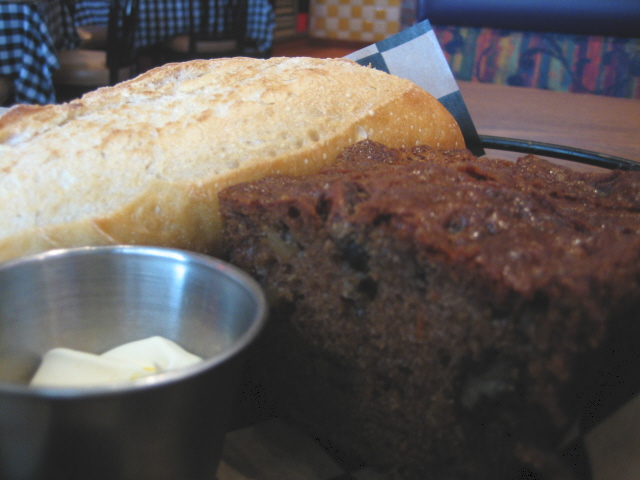 The bread on the right is a carrot raisin walnut bread. It smelled great and didn’t taste too bad, either. Nice and moist, with a good cinnamon taste. I passed on the raisins I found in it, as I’m not a fan of raisins in my bread.

As for the shrimp? So -so. The asparagus was way overcooked and mushy, the shrimp was a tad dry, and I found a huge hunk of bamboo skewer in the first shrimp I cut into. It’s probably a good thing I couldn’t just pop the whole thing into my mouth.

After downing a couple of shrimp, one of my sisters called. She was at loose ends for the evening, so I suggested that we head to Biscotti’s, as she’d never had dinner there (although she used to be a brunch maven on the weekends). I met her there, and started off with some sweet potato red pepper soup. 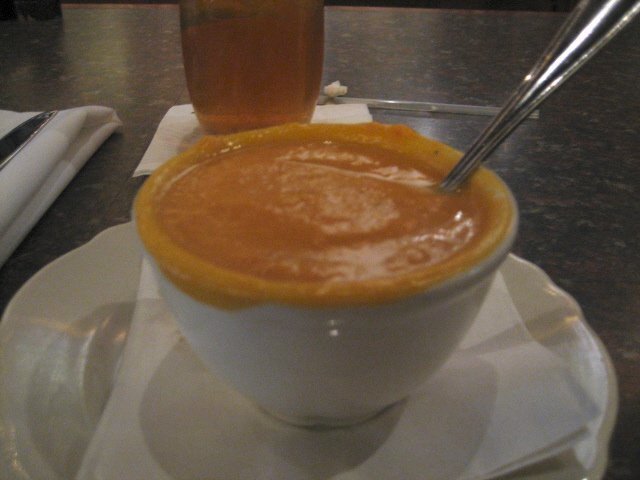 I should figure out how to make this, because it’s good, slightly spicy, and never disappointing. Since I’d eaten quite a bit (for me) already, I only had the soup while my sister had a cup of tomato dill bisque and half a smoked turkey sandwich.

Once we were finished with that, though, it was time for a cap and dessert. 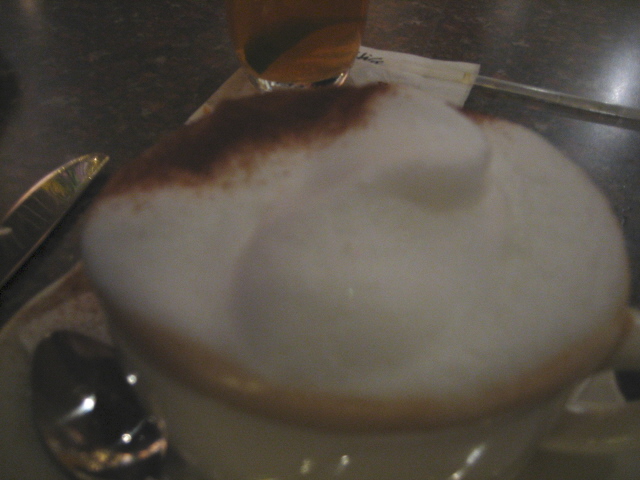 The dessert looks like a boob. It’s true! And some people actually order it that way. 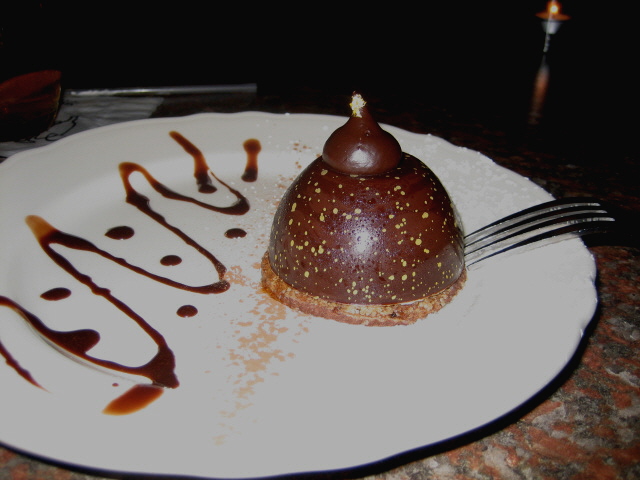 This is peanut butter mousse in a chocolate ganache shell atop a chocolate hazelnut cookie. Here’s an interior view. 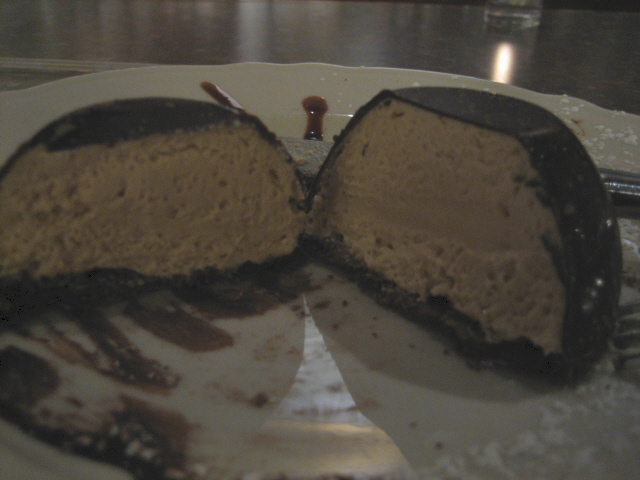