Grilling and barbequeing are not the same thing. Not here in the South, at least. Grilling is cooking foods directly over heat. Barbeque is done over indirect heat (with or without smoke) – the “low and slow” you hear so often, especially during Food Network’s annual grilling week when the phrase is repeated ad nauseum.

Tonight, we grilled. The thought occurred to me a couple of hours before grill time that Mother Nature was not going to cooperate, as a huge storm blew through. But, the skies cleared somewhat and the rain stopped, so I got to play with fire after all.

What was on the menu? I’m so happy you asked.

Tonight’s dinner was grilled chicken with a hot and sweet dipping sauce, corn on the cob, basmati rice, fresh green beans and fingerling potatoes, and salad. The corn was the last four ears from the bushel or so we purchased at the farmer’s market, as the rest was shaved, baked, and frozen. Another bag is in order, I believe.

The chicken was marinated in a very simple paste. To start, some black peppercorns, garlic, a touch of salt, and coriander were pounded together. 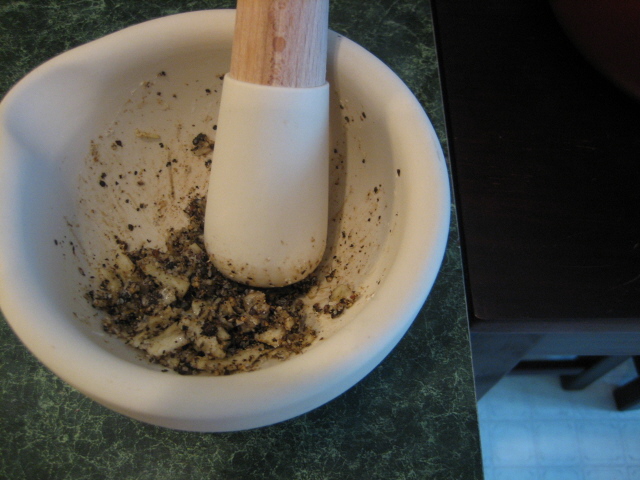 Having suitably bashed about those things – a mortar and pestle is wonderful for excising stress – I added the paste to some olive oil and honey. 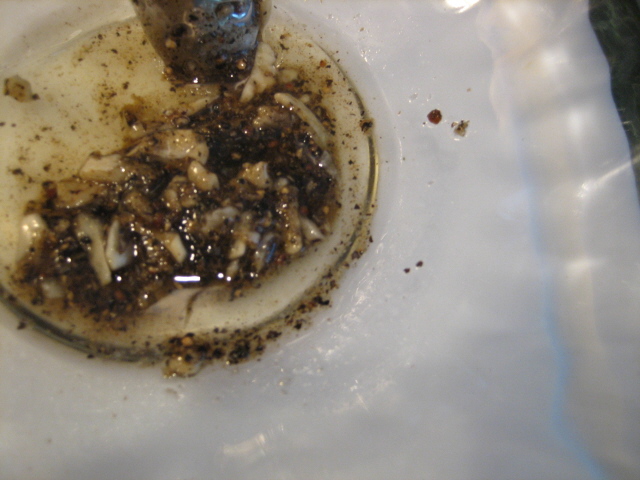 The chicken (five thighs, two boneless, skinless breasts) went into the marinade for about an hour and then on the grill. 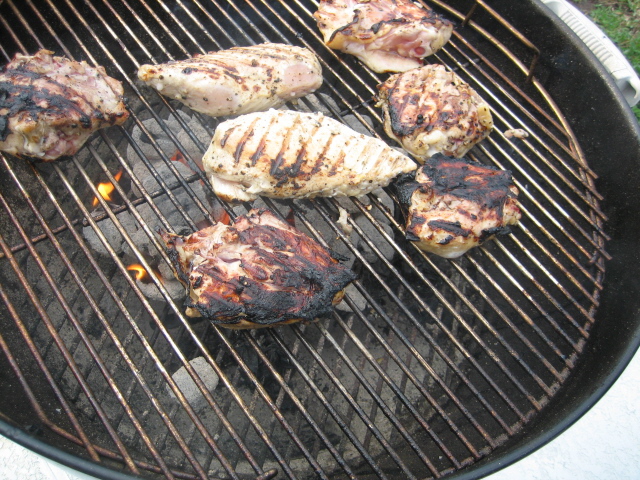 A quite nice char on the outside and wonderfully moist meat on the inside was the result of this effort. To go with the chicken, a dipping sauce made with cider vinegar, sugar, salt, garlic, and red pepper flakes. This was doled out in individual bowls to those eating, and would be just as great with pork. My mom, sister, and her boyfriend all tasted the sauce with their fingers but without food, and all made the same face that said, “I’m not eating that!” After tasting it with the chicken, however, they changed their tune. 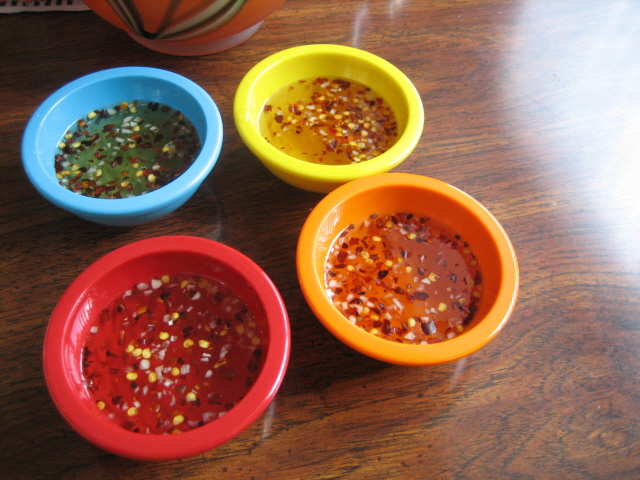 The aforementioned beans, snapped and ready for cooking. 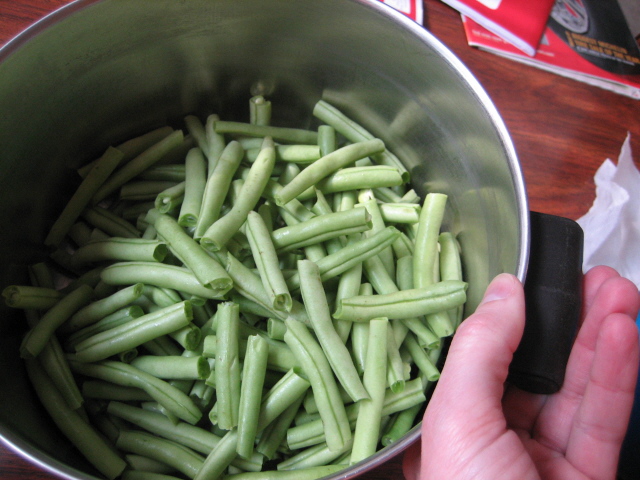 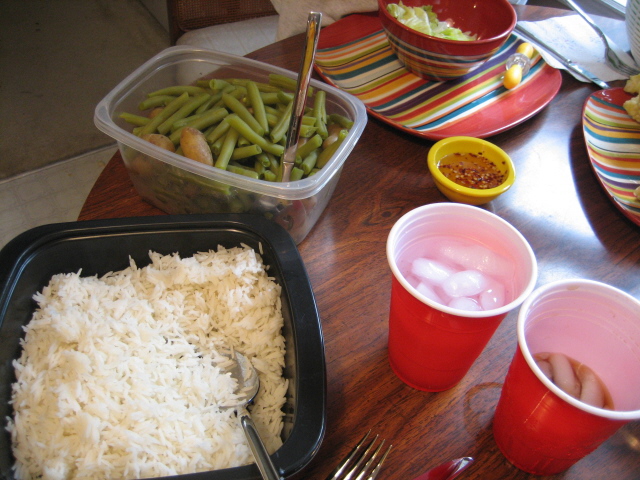 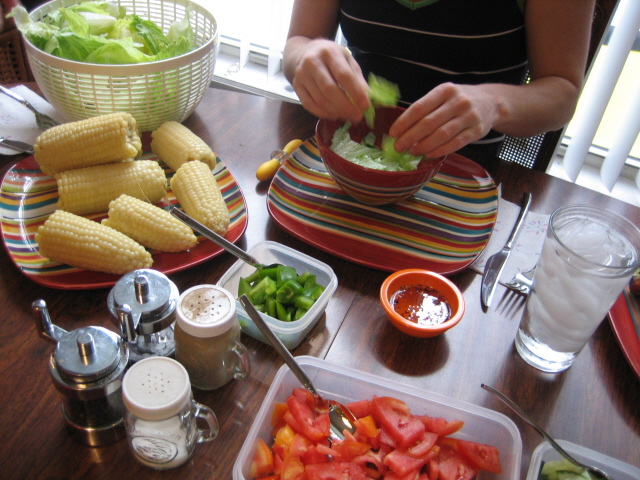 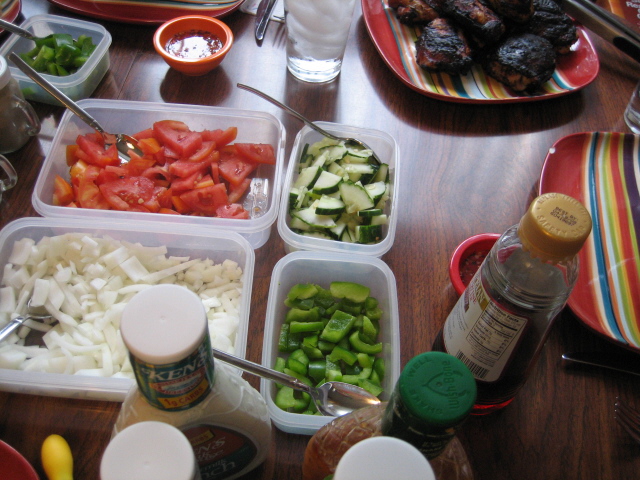 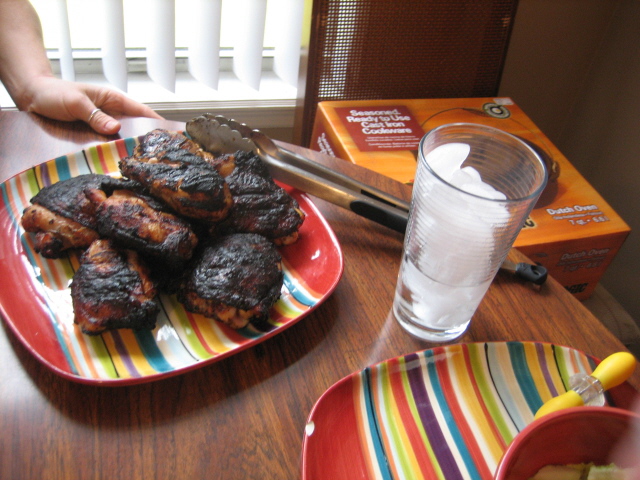 Yes, there is a lot of salad dressing in a lot of bottles in this house. I’d like to make some for the salad eaters to get them weaned away from the bottles. As I am not currently eating salads, I’m leaving them to their devices (for now), and then will slowly start replacing the bottles one by one. A delightfully insidious plan, don’t you think?

This entry only covers dinner, because – I’m ashamed to say – that’s all I ate (besides a small bowl of grits earlier today), and not much of it. To forestall the nagging that will no doubt ensue, let me say that I will be having some formula directly after I finish this entry, and then another in a few hours.

However, let’s get back to The Challenge. As you can see from the photos, we had quite a spread tonight. There were four of us, as our fifth was being hermit-like and elected not to join us to partake of some nourishment. Even with all this food, though, the price per diner was quite small.

* The rice was purchased in a 10 pound sack from Costco some time ago, and the pricing is lost to history (or until the next time I go out there). Since that is the case, I did the next best thing and looked up a 10 pound sack of the same rice at Amazon.
** The makings for the salad came from various places, but both the tomato and the cucumber were from our farmer’s market excursion.

There were leftovers as well, so some was packed for my sister’s lunch tomorrow at work and some sent home with her boyfriend. A very satisfying, tasty (and nutritious!) meal for four. I’ll have to work on nutrition breakdowns, I suppose.

A word about breakfast and lunch: I’m working on this. I’m not a big three-squares-a-day kind of person myself, and my mother doesn’t like to eat when she first gets up. My sister has Food Issues, but will take leftovers for lunches and likes turkey sandwiches. So I’m trying to get something together that will address all these things. The first step? Making some real whole grain bread tomorrow, suitable for slapping some lunch meat on, surrounded by lettuce, condiments, fresh tomatoes…mmmm. Baby steps, right?