I’m taking a little break next weekend and going to Savannah with my mom and aunt. Obviously, there will be no cooking for me during the weekend, unless one of the restaurants would allow me to invade their kitchen – and that’s unlikely. I’ll have to think of something simple for next Sunday evening, as I probably won’t feel much like cooking anything involved that night when we return.

Since my dear friend is single, and will not cook for one, we stowed the leftovers from last night’s fondue in the fridge. Tonight, I whipped up a little stirfry with some teriyaki sauce: beef, mushrooms, zucchini, onions, broccoli, rice. 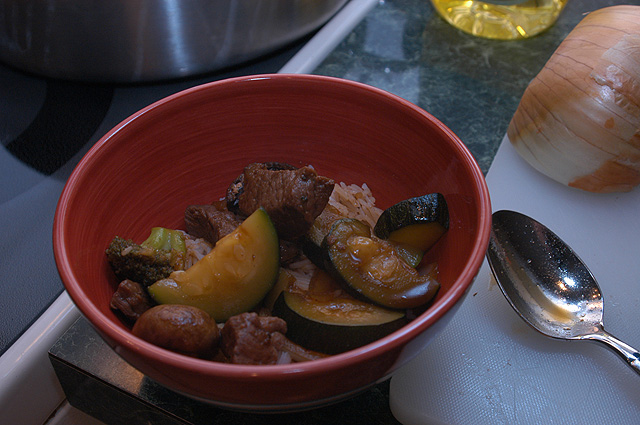 I ate a bit, but rice is one of the most difficult foods to eat for me because it’s so damned hard to control. I do love zucchini, and could eat it every day from spring to fall if the people around me could stand it.

Tomorrow, we’re having some people over for dinner, including one of my numerous cousins, whom I haven’t seen in over 20 years. On the menu: chicken in a creamy lime sauce, and rice pilaf with shallots and parmsean. We’ll probably toss a salad together and add naother vegetable in there as well.

Before dinner, though, my afternoon is going to be interrupted by another PET scan, as we’re overdue for one. As usual, these scans and checkups involve a certain amount of apprehension for me, and with the scans there is always a list of rules that have to be followed prior to scan to ensure good readings. For this round, there is no strenuous physical activity, no caffeine, smoking, or gum chewing 12 hours prior. Nothing by mouth except water five hours prior. They also measure blood sugar prior to injecting the radioactive glucose solution, as it must be within a certain range so the scan can give a good reading. Fortunately, I don’t smoke, and I can’t chew gum, but I suppose I better go ahead and have my cappuccino and Reese’s cups now.

Someone asked me if I was fully recovered now, given that most of my blogging is turned over to food, both cooking and eating, that I mention that I’m getting out and about, etc.

The short answer: No.

The long answer: Looking at all the things I’ve been through and am going through, I’m doubting that I will ever be “fully” recovered. Some things are obvious, of course. There’s little question that the rest of my tongue isn’t going to magically reappear, and the reduced salivary output is probably going to be with me forever, courtesy of the radiation. Other things are iffy, like the range of motion and strength on the left side, the scars down and across my neck, the swelling on the left side of my face, the limited opening range of my mouth, and so on. I still can’t eat very much, and when I do eat, my mouth gets fatigued very rapidly. I’m tired a lot – more than even the people closest to me know, I suspect. I’m constantly in pain, and I have no idea if that will ever go away, either, but I rarely take any drugs for that (only when it’s really out of control). So, no, I’m not fully recovered right now, even though I’m returning to life very, very (very) slowly.

So, on we go with our challenge, which has slipped under the radar this past week.

As mentioned, a friend rescured me from cooking duties by suggesting fondue. My involvement was limited to cubing the beef, opening a two pound bag of shrimp, and whipping up some caramelized onions, as my friend brought along all the fixings. There’s something nice about sitting around with some people, stabbing chunks of food with little forks and setting them into a hot pot.

We had: beef, shrimp, broccoli, mushrooms, zucchini, caramelized onions, and some cubes of french bread. And water. Lots and lots of water for me. I did eat some of these things, even picked the softer inside of a couple of bread cubes out and dipped them in cheese (that, as you might imagine, required a significant amount of liquid to get down). There were only three of us, but that turned out to be a good number, as otherwise there would have been dueling forks, I think. 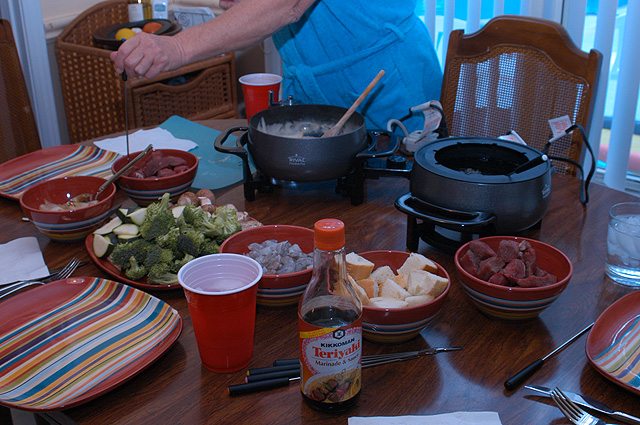 I told them that we should do a Chinese hot pot, with broth, next time. And we should definitely do a dessert fondue.