Random questions from people who are stumbling across this blog, and answers from yours truly.

Have you considered putting up some forums?
No, I haven’t. I know it’s hard to carry on conversations in the comments, and it would be easier to have ongoing discussions (and ask questions of me) in a forum, but for right now, this is what’s available. I’ll consider it, though, as I do get that question pretty regularly.

Can you plan out some menus for me?
I can’t even plan menus to feed my own family, friends, and assorted guests, because schedules are so fluid around here.

Could you do it if I paid you?
That’s flattering, but not at the moment.

What’s your food philosophy for this lowfat menu creation you have going right now?
As you’re aware, family and friends have requested lowfat menus, and of course the challenge is for nutritious menus, which should not be laden with fat. I suppose at its most basic, my intent is to create food that people like, bearing in mind their particular requests as much as I’m able. Right now, that would be lowfat menus that taste good. This is not the same as no fat. If you’ve ever seen that Low Calorie Commando show on FoodTV, you can see the rather extreme substitutions the host goes through to eliminate almost every bit of fat from whatever it is he’s making, and that’s not what interests me. It is perfectly acceptable and reasonable to include small portions of things like real butter in cooking. The things I’m doing are not ultra lowfat, but neither do the menus include entire sticks of butter in their creation. Moderation in this, as in all things, and balance are the keys.

Have you seen that show Top Chef, or Hell’s Kitchen? What’s your “signature dish”?
I’ve seen episodes of both, yes, although I’ve not watched any of the new season of Hell’s Kitchen. I don’t really have a signature dish per se: I like to cook a wide variety of things, and luckily even my experiments turn out well. I don’t lean toward too many fussy type dishes. I mostly like to make food that people could make themselves if they were so inclined.

Would you consider opening a restaurant with the appropriate backing?
Maybe, but I think I’d probably not be an active worker bee in the kitchen. Designing a menu? Sure. Actually working the number of hours in the kitchen a restaurant would require if I were the chef? No. I’m simply not physically able to do it, as much as I hate to actually admit that, and I have no idea when (or if) I ever will be. I would not be averse to doing other things related to a restaurant, though.

Any progress on putting together your own prepackaged food items?
Not at the moment, but I really haven’t put any effort into it right now. My available time is limited, and I do have a primary business to run, so this is playing second banana for now. It would be nice, though, to be able to break into it.

What’s your favorite food to eat?
All time? Good lobster, simply prepared, with drawn butter. These days? Ice cream. In my dreams right now? A double cheeseburger. With fries.

If you could go anywhere and do anything right now, what would it be?
I’d move my family to the Italian countryside, own a small vineyard, grow grapes, make wine, and cook for people.

Have you ever had any formal culinary training? If not, do you plan to?
No and no plans at present. I had given some thought to the latter, but if I were to do that, I’d like to do it right. That would involve leaving town for awhile and would also involve a lot of time, neither of which is practical. I’ll remain self-taught for now.

Last (and certainly least), a question contained in an email from an anonymous person who seems to be one of those random people who thinks everyone else should be as bitter and nasty as they are: What makes you think you’re qualified to give anyone any advice on anything, especially cooking or making menus or how to eat on the cheap and what makes you think anyone would be interested in a book by some amateur like you anyway?
I never claimed any qualification other than being ready, willing, and able to take up the challenge presented to me, with both the rules and my role clearly defined. So I do what I can to take up the reins where others can’t because of their limitations (time, availability, ability) or inclination (because a lot of people read about subjects they would never themselves do). The latter is why books written by amateurs in specific subjects can be interesting and popular: many people will never be able or willing to go live in a 200 year old farmhouse in Provence for a year, but Peter Mayle and his wife did just that and it makes for good reading. Most people would never take on the task of cooking their way through a famous cookbook, but someone else did. Besides, I figure that doing things like this really annoys joyless, humorless people for some reason…

More server setups today. More ordering of equipment, including the last rack that will fit in the current cage at the NOC (and as soon as that arrives, the NOC guys will start building out the next cage for us). More paperwork. More cooking.

Tonight’s menu: sauteed marinated shrimp with a sweet garlic sauce, steamed brocooli with lemon (my sister’s request), sliced fresh tomatoes, and rice pilaf with shallots and parmesan (again, yes, and in place of my sister’s request for mashed cauliflower, since I didn’t feel like going back out to the store for a head of cauliflower).

Just three of us for dinner tonight, and a very informal, serve yourself kind of affair.

The shrimp, after marinating for ahwile in honey, soy, fresh lime juice, and red pepper flakes and then sauteed in a touch of olive oil. 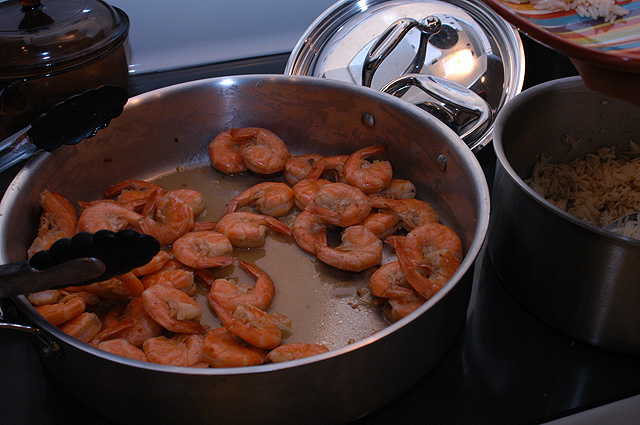 Serve yourself in whatever fashion suits you. 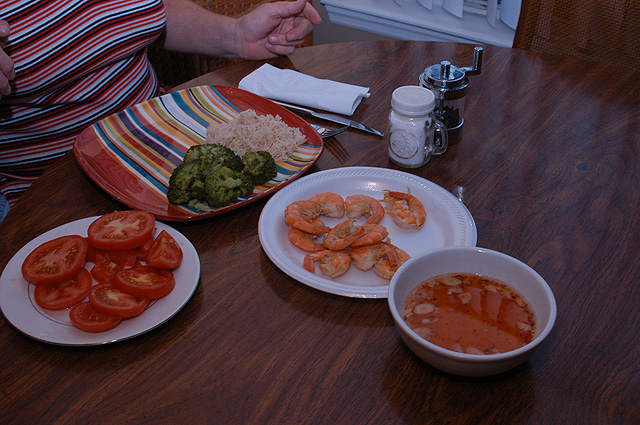 The sauce was made of rice wine vinegar, sugar, water, a touch of salt, thinly sliced garlic, and about half a teaspoon of a chile-garlic paste. It went very well with the shrimp.

I’ve noticed of late that my mouth is ultrasensitive to foods on the spicier side of the scale. It’s probably due to one of the rinses I have to use, and it’s bumming me out a little, for two reasons: first of all, it’s painful and burns when I eat something even a little spicy or with a good amount of vinegar, like this sauce, and second, I like spicy foods but can’t eat them right now. I suppose I should be thankful I can eat anything at all, considering everything, but I suspect my recovery would be more enjoyable (and go more quickly) if there weren’t so many damned limitations relative to my ability to eat. As it stands, my weigh-in yesterday was at 107, probably because I couldn’t eat anything all day before the PET scan. In two months, it will be a year since I got the feeding tube. While it helped save my life during treatment, I’d really like to say goodbye to eat, but at this rate it will be with me indefinitely.

Where was I? Ah, the shrimp. I ate one, with some sauce, and it burned a bit. It sure did taste good, though, for what I was able to taste. If I ever start packaging foods, I’ll have to remember this sauce for the roster. Some steamed broccoli with real butter, a bit of rice…and a post-dinner cappucino and a Reese’s cup. Not a bad little meal for me, although I suppose I should dump some formula down the tube, as I’m way low on calories the past couple of days.

Our breakdown for tonight’s dinner.

Someone asked me if the diners included myself in these calculations, since I don’t really eat that much of the “real” food. Yes, the count does include me unless I note otherwise. Technically, I am participating in the meal, even if I’m not eating as much as a person usually would. Since the leftovers are usually eaten for lunches, and I’m not including those in our tabulations, most dinners are new creations with new costs and the leftover factor is eliminated for those dinners. I think it evens itself out.

One of my cousins, whom I’ve not seen in 20 years or so, has been in town for about a week. Monday evening, we had her and her son over to join us for dinner. Yours truly had a PET scan scheduled in the afternoon, and it took quite a bit longer than it usually does, as they were backed up. And once things get backed up, the trickle down effect means that if your appointment is late in the day, you get the cumulative effect of the delay. I finally finished with that – and we should have the results by the end of the week – and tried to get to the bank before they closed to get a cashier’s check to send off for the small company we’ve just bought out. Didn’t work, as those bankers don’t keep the same kind of hours I do. So I took off to Publix to pick up a few things for dinner, as Costco is on the other side of town and I didn’t feel like fighting the rush hour traffic to pick up what I needed. As I usually do, I weighed in at Publix, sighed at the result, grabbed what I went in for, and headed home.

On the menu: seared, roasted chicken breasts with a creamy lime sauce, rice pilaf with shallots and parmesan, hearts of romaine with fresh grapefruit segments (courtesy of my sisters, who picked up a bag of grapefruit on their way back from Orlando on Sunday) and walnuts, and sliced fresh tomatoes (because it’s just that season around here).

The salad. Very good with a raspberry-walnut vinaigrette. 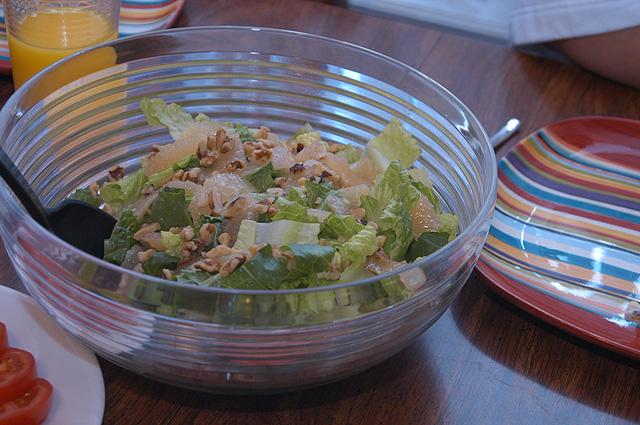 The chicken, which looks really white – this is a byproduct of being seared and then finished in the oven in some of the sauce. A couple of lime slices with it, as we’re citrus kind of people around here. 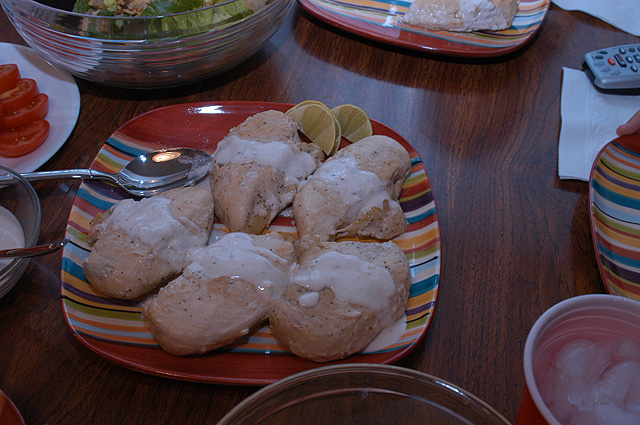 The table. There is nothing like tomatoes in season. In the small bowl is more of the sauce. 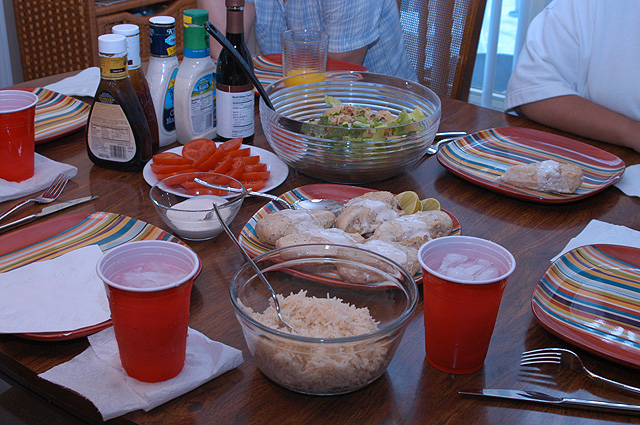 After dinner, cappuccino for three of us. I was tempted to put together a dessert, but everyone was full and I was still recovering from the lawn work on Sunday, so I skipped it.

This was almost a grocery store-only menu, which would be fairly typical for most families if for whatever reason there wasn’t time for doing the bulk shopping. Our breakdown for dinner, which includes leftovers:

It was an enjoyable evening, I must say. It’s always nice to catch up with people you haven’t seen in what seems like forever and see what has or hasn’t changed in their lives. My cousin joined in on the advice train: you should open a restaurant, she said. Nice to have that kind of support from the people eating your cooking, I think.