Sunday was our last day in Savannah. Saturday night, after a day of touring, walking, and eating, the girls went right to sleep when we reached the hotel. I stayed up a bit later, as I was too restless to sleep. Eventually, I managed to go to sleep myself, only to be awakened between 5 and 6 AM by a couple of servers needing attention. Those issues addressed, I debated staying up until the girls awoke, but I was freezing in the artic air my mom insisted should be the norm, and crawled back into bed and pulled the covers up over my ears.

And there I slept, not even noticing when they both got up, dressed, and went out of the room for coffee and tea. They came back up to the room at 10 AM, when I was just waking up. Checkout time was at 11, so I hustled through a shower and a change of my dressing while they packed their things. I packed up the trusty laptop, did a once-over of the room, and took pictures of both of them. I got a great picture of my mom’s butt as she was leaning over a bag, but she’d kill me if I posted it.

We checked out and drove down to River Street to park, as we definitely wanted to get something to eat before leaving. We decided on the Boar’s Head, and made our way in after walking around for about 45 minutes, taking last looks at things.

My aunt thought this meant the place was selling Boar’s Head brand meats for sandwiches, but this was not the case. They simply happen to share a part of their name in common. They did, however, have a couple of sandwiches on the menu, along with standard fare like burgers and salads for lunch. The restaurant is owned and run by a graduate of the Culinary Institute of America.

Since I can never resist trying it, I ordered a cup of the She-Crab soup. 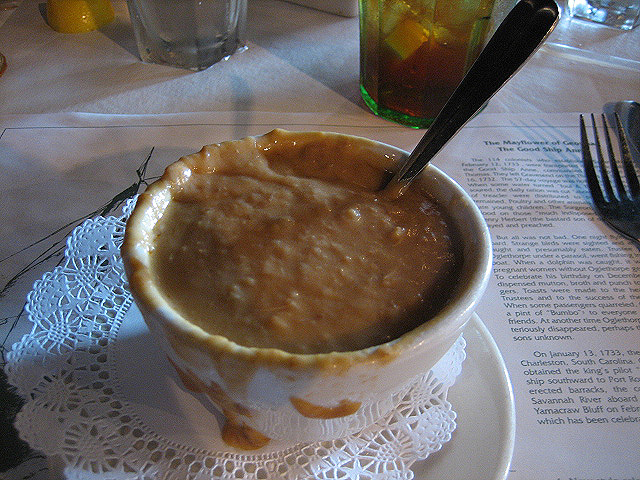 The way you see it there was the way it was presented to me. Sloppy presentation, I must say. I must also say that it was not very good at all. It was much too thick, almost dip-like in consistency, and had very little flavor. I did not finish it.

My aunt ordered shrimp cocktail to start, and a bloody mary as well. On Sundays in Savannah, liquor cannot be served until 12:30. 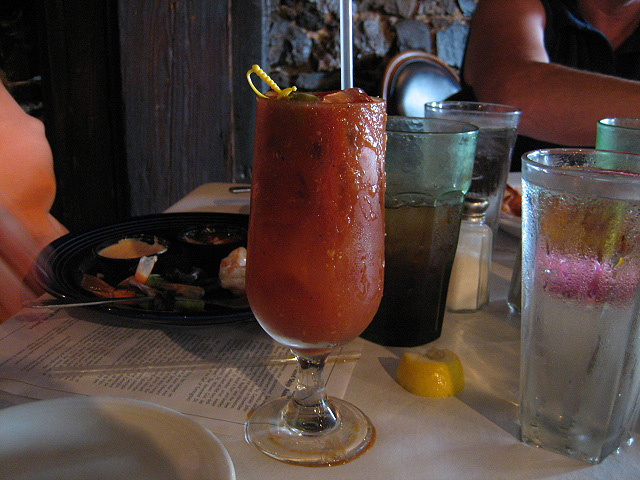 Mom had some steamed shrimp to begin. As with my soup and Barb’s shrimp cocktail, I was underwhelmed by the presentation. 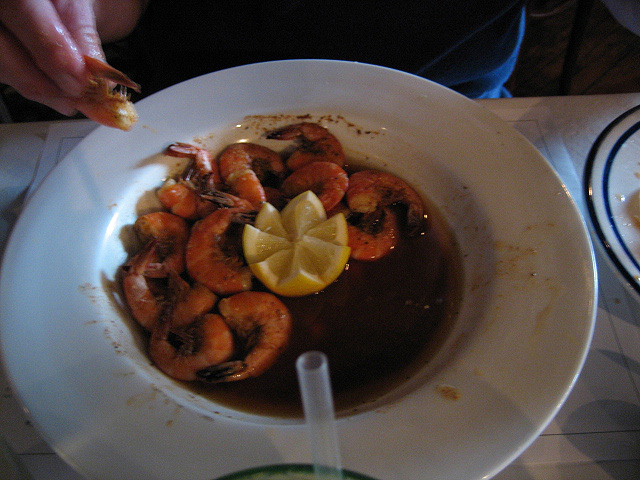 They both ordered bacon cheeseburgers – lowfat be damned! – and I ordered a hot Georgia brown, which is turkey, ham, tomatoes, cheddar, and bacon layered atop a split English muffin and baked. I also had some fries. 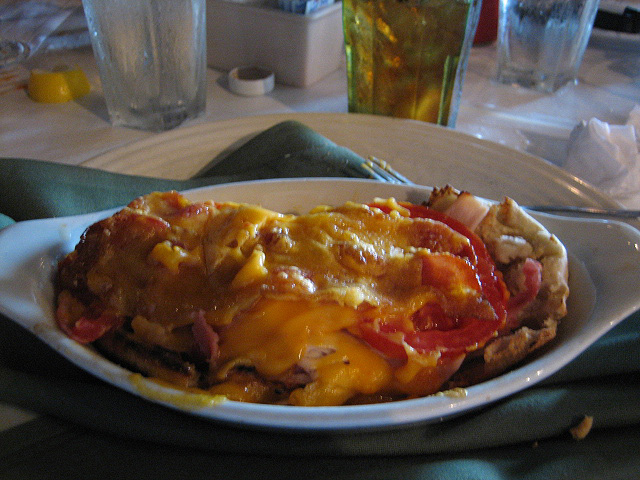 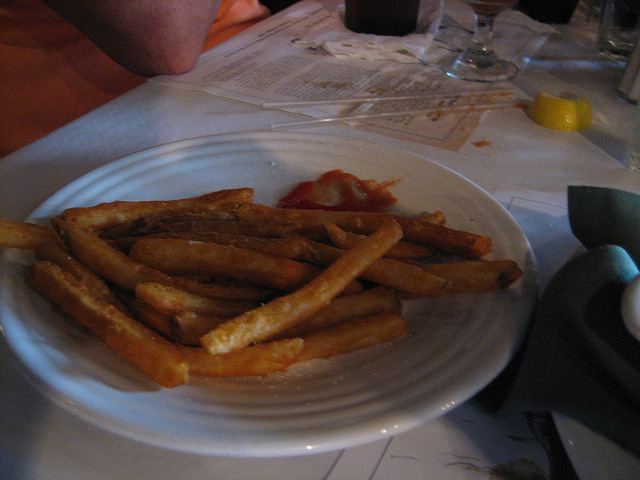 The aftermath of mom’s shrimp and burger. 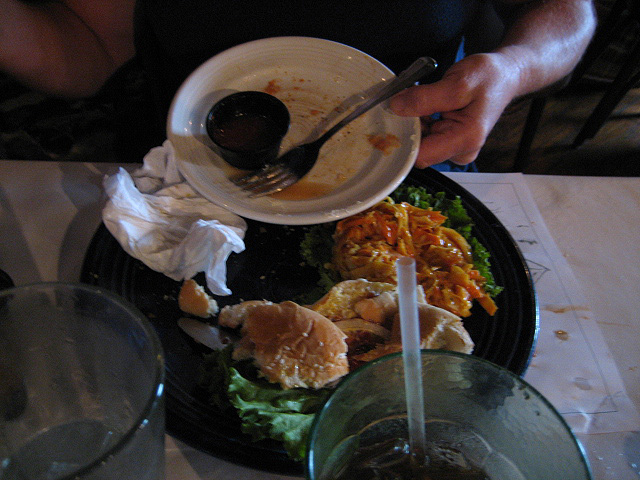 I wouldn’t recommend the Boar’s Head, at least not for lunch. Perhaps the dinner menu and service is better.

While I waited for the girls to use the facilities, I looked up toward Factor’s Walk and Bay Street. Not a soul to be seen. 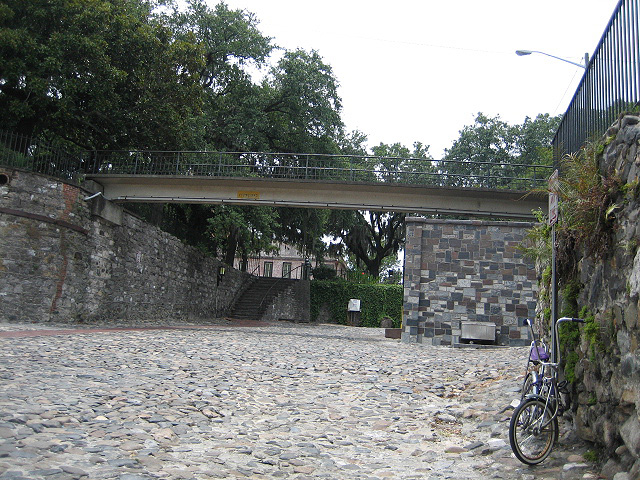 A look down River Street to the west. 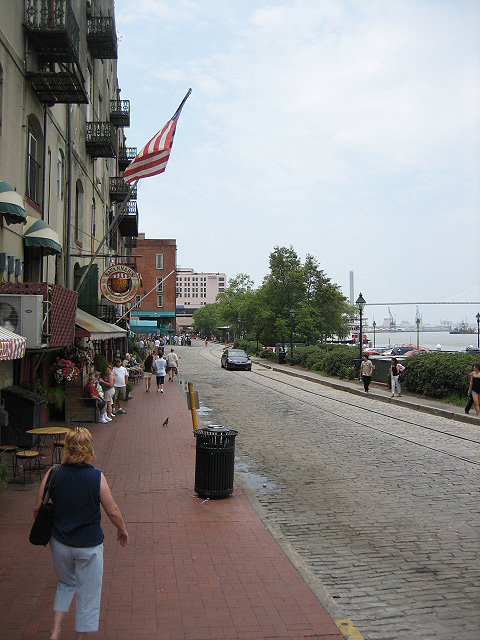 We dropped back into the candy store, as I wanted to pick up a bit of fudge before leaving. One of the workers was dipping out pralines. 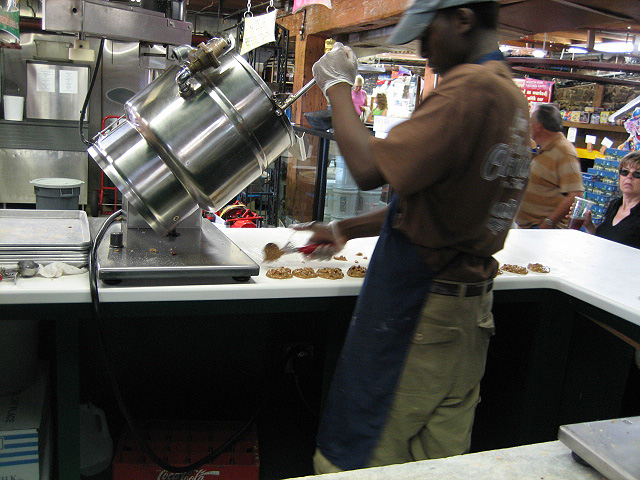 Mom had mentioned that she wanted to go over the huge bridge we saw, that appears in some of the photos I’ve posted – the Talmadge bridge. So we navigated over to it and headed up. Going over the bridge on US 17 will eventually land you in Hilton Head, SC. For us, not actually going that far, it wound up being a short trip over a really tall bridge to not much of anything.

Downtown Savannah from the Talmadge. 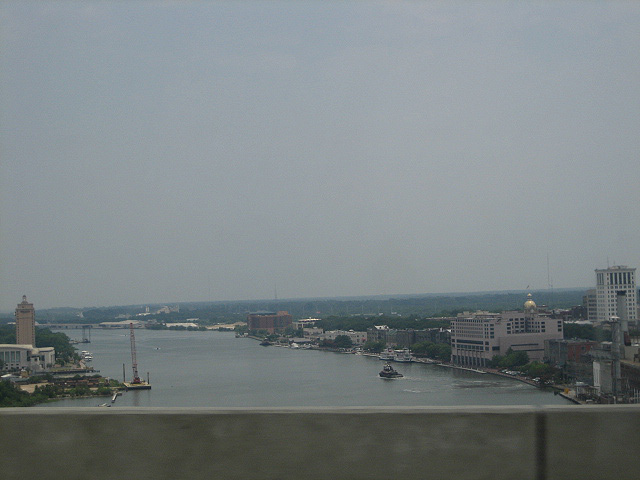 The descent from the bridge is into South Carolina. This business was open, and presumably completely honest about what was available inside. A short way along, the closed Showboat. 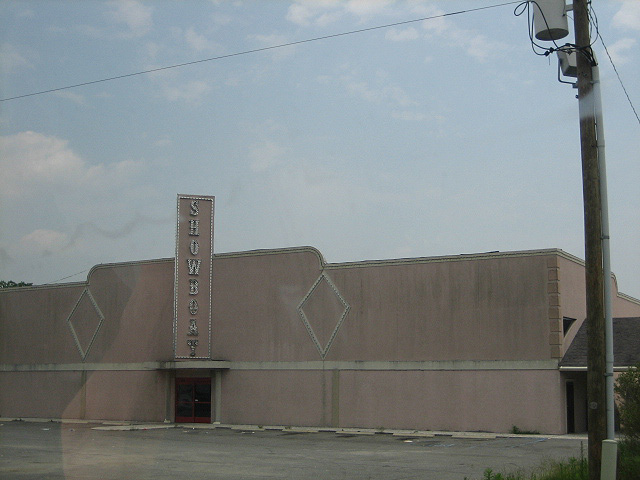 We turned around and headed back to Georgia. 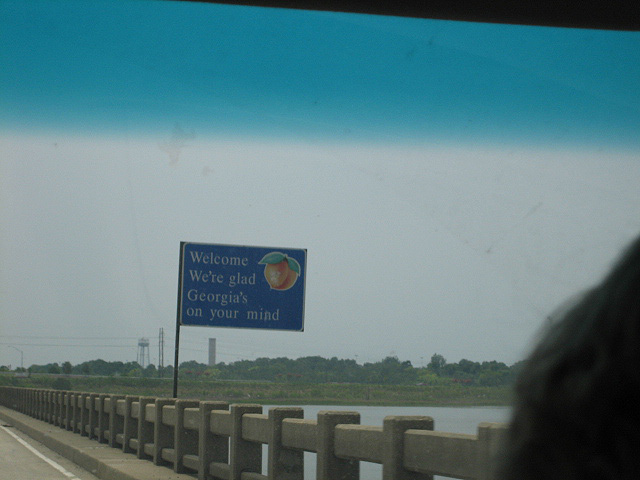 And then continued on our way home. We decided to take along some seagull poop as a memento. 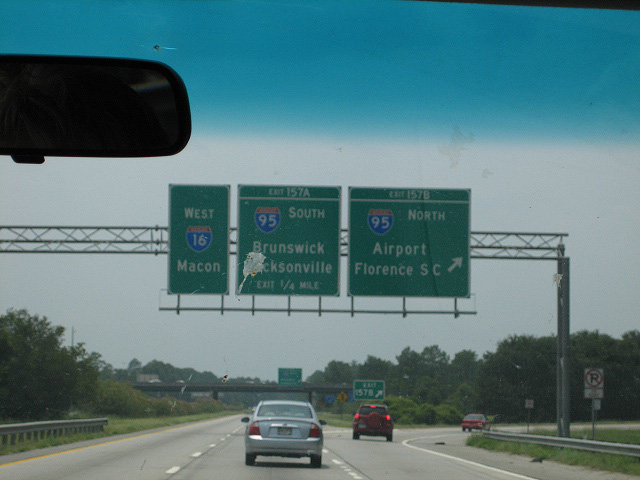 It hadn’t rained at all through the weekend in Savannah, but we hit intermittent spots of heavy rain on the highway. We also encountered a traffic jam. 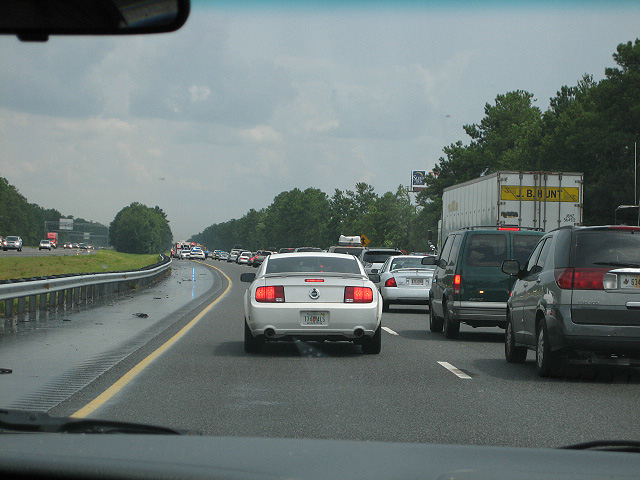 What in the world could it be on a Sunday afternoon? 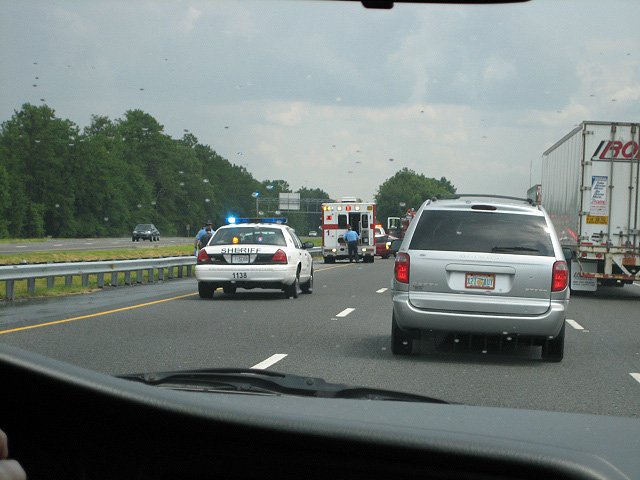 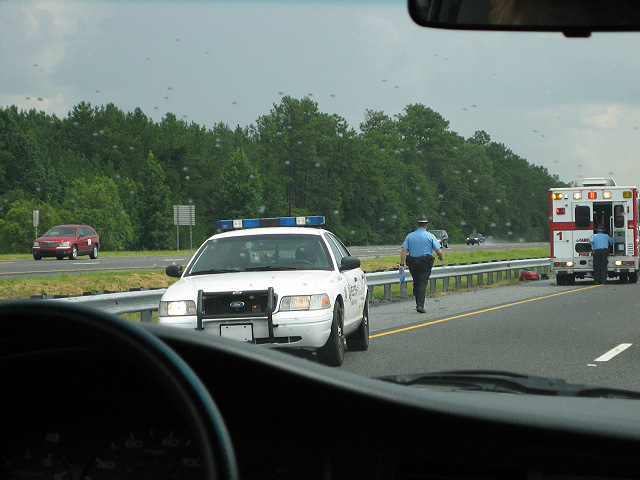 No, it doesn’t look good at all for someone who wasn’t quite as adept as managing themselves in the rain as others. 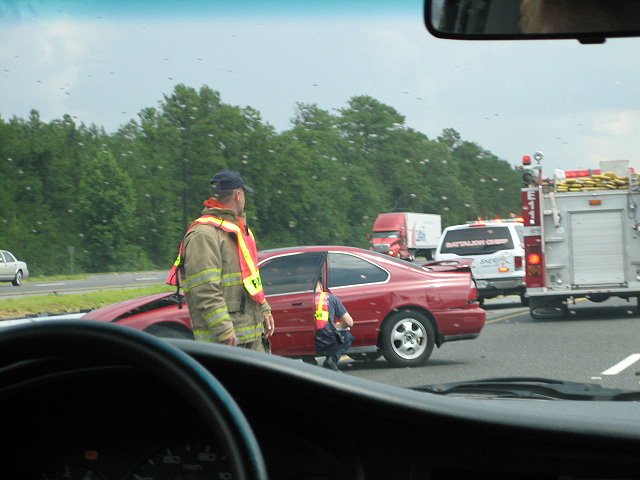 That traffic and the rain dinged us by about a half hour on the trip back, but we still made it in before dinner time. After unloading the car, and sorting things out, we kicked off our shoes and relaxed. In my case, that meant sandals, and another laugh at the tan lines across the tops of my feet. 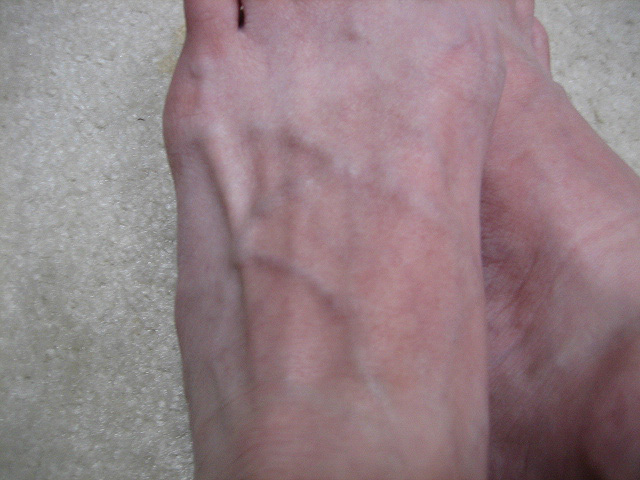 And there you have it: our interlude in Savannah.

I thought about food no less in Savannah than I do at home. That is to say, I thought about food almost constantly. I came up with Monday night’s menu while we were walking around this weekend, and while we were planning on having a relatively small gathering, it has turned into something of a dinner party for somewhere between 11 and 13 people, depending on two ifs.

I was going to try to make lemon souffles for dessert, but I’m leaning toward creme brulee with fresh berries instead, since the custards can be prepared well ahead of time. One of our invitees is bringing a chocolate cake along. It should be a grand time, with a good mix of people. As usual, if we know you and you’re in the area, you’re welcome to come along. Just drop me a note or give one of us a call to let us know you’ll be dining with us Monday evening between 6 and 6:30 PM.