When you think about making a loaf of bread just to use it for croutons. Even worse is when you consider a second loaf – rye or pumpernickel – for the same purpose, to have a colorful mix of those crunchy cubes. Particularly bad is when you’re well aware that if you do this, and make these critters, you won’t be able to eat any of them. They’ll only be for the enjoyment of the other diners at your table.

It’s a madness, I tell you.

Homemade pasta has always been my nemesis. Not because it does something nasty to my digestive system, not because it tastes bad, and certainly not because it’s something I won’t eat. No, despite all my attempts to make fresh pasta, the dough has always laughed in the face of my efforts, refusing to evolve from separate ingredients into something edible.

Yes, I can report now that yours truly has conquered the pasta demons that have haunted me lo these many years.

We begin by making a ball of dough, made of just all purpose flour and egg. In my case, because this was a test batch, this means a small ball of dough, suitable for making enough to feed two hungry people. I won’t bore you with the kneading and passing of the dough through the ever-smaller roller settings on the pasta machine, nor with the passing of the cut sheets of dough through the attachment. But I will say that making pasta is a sort of messy business. 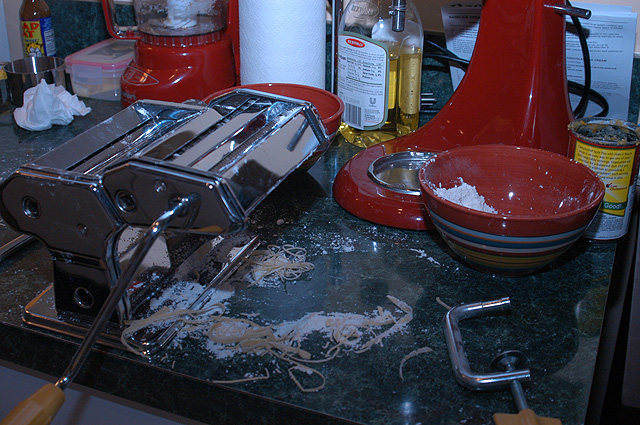 I cut two types of pasta: fettuccine and spaghettini (angel hair). This was for no particular reason other than that these are the two types that can be cut with this machine’s attachment. 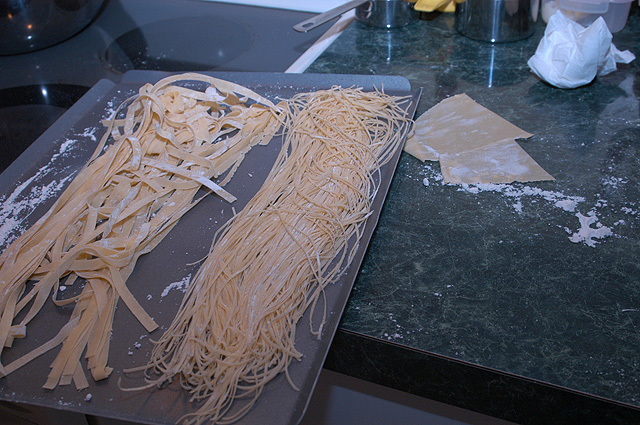 This is where I’ve generally run into trouble in the past. The pasta is supposed to sit for 10 minutes or so – and in some cases, must sit while you cut the rest of the dough – and during this time, it dries a bit. With previous batches, the pasta has been dry when it was cut and then turned into brittle sticks that snapped in half. In those previous attempts, even a damp paper towel over the already cut strands wasn’t a lot of help. When one of those strands was placed in boiling water, it instantly disintegrated. That might be useful for getting rid of water-soluble trash, but it isn’t conducive to good pasta.

Not this time, though. A lot of people will make fresh pasta, dump it into boiling water, and then walk away for eight to ten minutes, as if it’s the same as dried pasta. It isn’t. Don’t leave your pasta unattended! Check it after about a minute and a half for doneness, and if it isn’t done, keep checking it every 10-20 seconds or so. You’d be surprised how quickly it will go from too firm to mush, with the al dente stage passing you right by.

Since I am rather gun-shy about fresh pasta, I obsessed over my little batches while they were cooking. The fettuccine took about two and a half minutes. 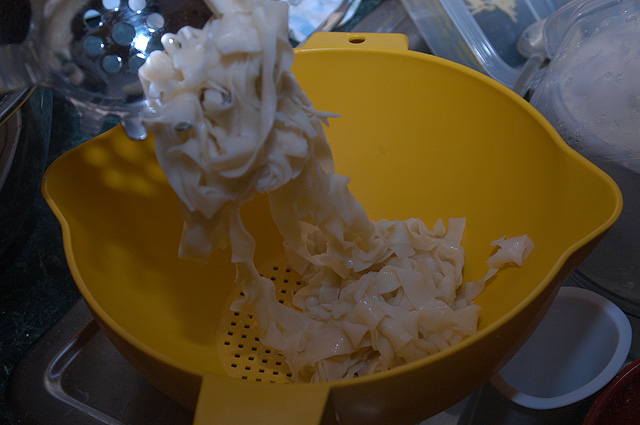 The angel hair took about a minute and a half. 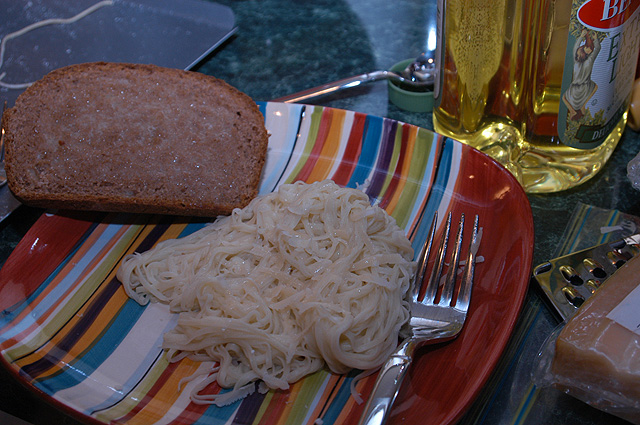 Oh, and did I mention that I finally got a loaf of bread made? I’ll need to make more, as a friend of mine is heading out of town for about ten days or so, and I expect people on the road can always use a little home-cooked goodness, eh? 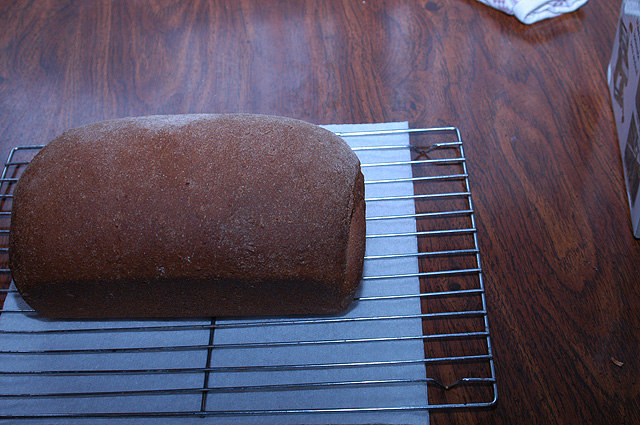 Both samples of pasta were dressed very simply, with a dash of olive oil and a little shredded parm-reg, and my mom was the taster of about a quarter of the total of each type. Now that I know that I can indeed make fresh pasta correctly, the next step will be to make some fresh tomato sauce and some meatballs (when I was younger, in junior high, I made all the meatballs for the sandwiches we sold in our family’s convenience store down in the Ft. Lauderdale area). If I can find my baguette pan in the midst of the remaining boxes that are still packed, Wednesday’s planned menu of spaghetti and meatballs with garlic bread will be entirely homemade except for the salad that will be served alongside.

What do you do with fresh multigrain bread (whole wheat flour, sunflower seeds, walnuts, and almonds)? Why, you make a sandwich, of course. My sister did just that. Boar’s Head Salsalito turkey, a slice of cheddar, mustard, mayo, salt, and pepper between a couple slices of bread that was made just hours ago. 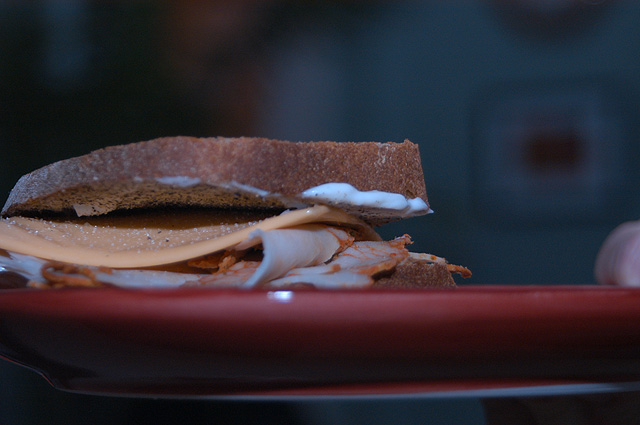 I am a self-admitted junkie when it comes to cooking and food-related shows. FoodTV, PBS, Discovery Home, Fine Living: I’ve seen just about every show at some point or another. Some of tthe shows are quite good – Rick Bayless’ show is one, even though his manner of speaking can get on my nerves, and Lidia Bastianich is interesting – and some are just disasters worthy only of snarking – Semi-Homemade with Sandra Lee tops this list. Most are somewhere in the middle.

But let me tell you one thing that is truly annoying: whenever a host or voiceover talks about how so-and-so takes pride in what they do, or how some producer talks about their secret being quality ingredients. This must be written down somewhere in the Manual Of How To Be On TV. When was the last time you heard of some business owner declaring that they’re doing the least possible they can, or that they use the crappiest ingredients they can find to make their food? It’s ridiculous. That said, if I were ever interviewed for some reason whenever this food business gets going, no doubt I’d say the same thing. How do you answer “What’s your secret”? You can’t very well give away any secrets you do have for the food you make – after all, that’s your intellectual capital. I suppose I just wish they’d find a different question to ask.

Speaking of food – and the only time I seem to not be speaking of food is when I’m speaking geek – I’ve decided that we’ll have to have some tastings around here after mom recovers from her surgery. And you know what that means: ribs! I figure I’ll take myself out to Costco, pick up some slabs, and then break down those slabs into smaller portions for tests of the rub combinations. That way, I can fire three or four portions from a single slab and test multiple rubs simultaneously. Then I can build on whatever my taste testers have to say. Of course, I keep reminding myself that it’s time to start writing down whatever it is I’m doing on a daily basis as I cook so that if something is a winner, it can be recreated consistently and eventually can be packed. Naturally, for the marinade the shrimp swam in, I wrote down nothing at all…

What’s on the to-do sheet for Sunday? More “real” work, of course, just as with Saturday even though the only part I wrote about was server setups. There’s always maintenance to be done, always something to update, always something to do. But, in the in-between moments, I do want to bake some bread, and I wouldn’t mind testing out a couple of pasta doughs to see how they do. I still have a couple of chicken carcasses in the freezer, and it may be time to break those out and go ahead and do some stock. Oh, and laundry, before I run out of clothes that actually fit. For dinner, I’m not so sure, as we have leftovers that need to be eaten, so my food output for the day may just be experiments rather than a meal. The best thing about experiments, though, is that they’re rarely completely inedible – or fatal – so the people acting as my guinea pigs won’t wind up as bodies I have to bury behind the fenceline. And my sister has specifically requested another batch of bread and butter pickles, so I’ve added that to my list as well.

Future plans: I’d like to try my hand at brewing some beer. I’ve always wanted to try it, and still do, even though I’m currently unable to drink anything with alcohol in it (it burns! it burrrrnnnnsss!). I think it’d be fun to do that and to make some wine as well. I’d love to take one of those intensive 2-3 day courses on wine at someplace like the FCI. Putting together a good tomato sauce and canning it – this will also take some testers, naturally, although one of my tasters doesn’t like tomato sauce. Grissini. Lemon curd tarlets with meringue. And on and on and on.

So many plans, so many ideas…