And so we come to the final day of The Challenge. Before we get into that, though, a little catching up is in order, to fill in the gaps left by my slack updates.

Thursday night was speech night: my sister, who is taking a speech class, needs a captive audience of at least five people to hear her speech on whatever the topic happens to be. The speech – and the audience – have to be taped. We’ve been through a number of these this semester, and each time, our routine is pretty much the same: speech, then dinner, prepared by yours truly. This time, though, since we are in the midst of house-hunting, and since we wanted everyone’s input on this one particular house we’ve been considering, we all piled into a car and headed over to wander through it. I imagine that was quite a sight for people in the neighborhood. Earlier, my mom and sister had picked up the makings for tacos, so I did not have to cook anything and was able to work work work until it was time to go see the house and have dinner. This was a good thing, as it happened, as we’ve been quite busy lately and there’s always something to be done. Once we returned from the house viewing, I warmed some tortillas on the griddle and we all sat down to eat. 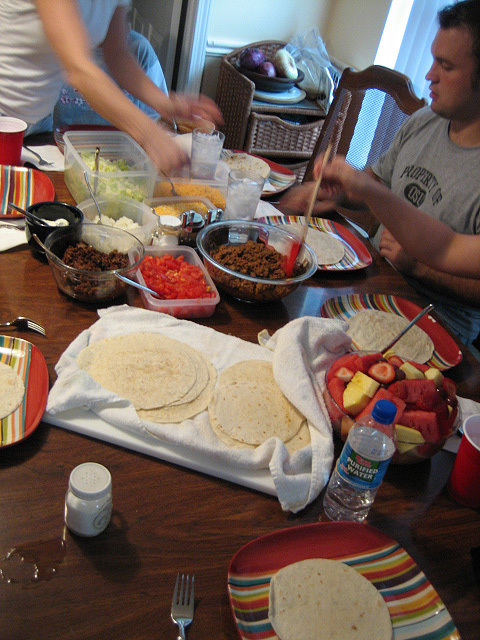 Well, more accurately, they all ate, and I had formula. That was, I think, the only thing I’d had to eat that day, which was probably a mistake. Later that evening, I had another excruciating round of heartburn or reflux or whatever the hell it was, with a round of puking as a weird bonus session. This lasted into Friday, and since I was in no condition to cook, the fam fended for themselves. I had been planning to head to the NOC to set up a bunch of servers, but wound up hanging around the house, working off and on, and sleeping quite a bit.

When Saturday rolled around, I felt a bit better, and headed to the NOC to get the servers up and racked (taking someone along with me to do the lifting, since I’m still not quite as able as I’d like to be). There were half a dozen servers to set up, and Wendy’s was calling our name, so dinner was uninspired. At times, it must seem like feeding a little baby when I eat: one and a half chicken nuggets and some fries was what I managed. Plus some formula. Everyone swears that one day I’ll be able to eat like a normal person again, but some days it seems that goal gets further and further away.

And that brings us to Sunday, which was supposed to be a speech day, but turned out not to be, since my sister needs to do a bit more research before she’s ready. Still, just about any day is a good day to cook, and I did just that after we’d been out looking at more houses and lots.

Oh, on a side note: the canning operation of the tomato sauce seems to have gone very well once I got the canner to coooperate. 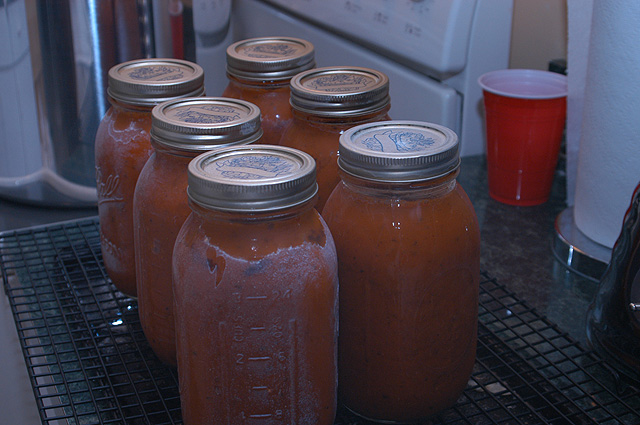 The white residue is from the vinegar I added to the water to help keep the cooker from discoloring. Nothing serious.

Sunday’s menu: roast beast…I mean, beef, mashed potatoes, gravy, peas, and two sauces: a horseradish cream sauce and a mushroom sauce with wine (Zin, in this case). I was going to make rolls, but by the time we returned from the house hunting, there wasn’t room in the schedule.

The beef. Eye round. Isn’t it pretty? 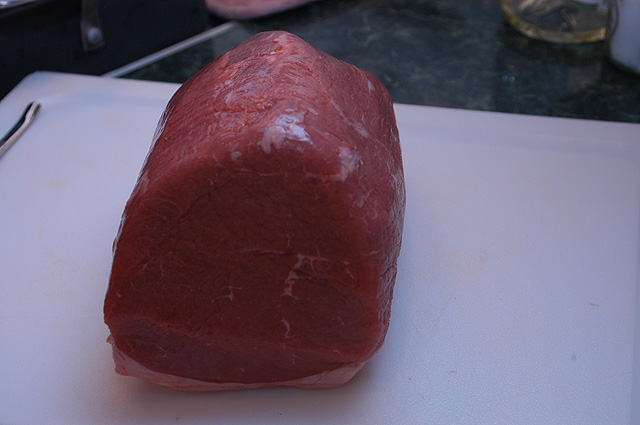 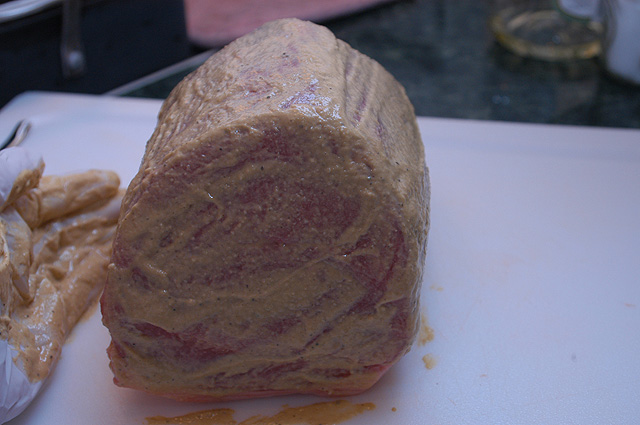 Into the oven it went, starting at 425 for a bit, then lowering to 375. In the meantime, some starchy goodness. That’s a reflection on the top there, not some creeping crud I decided to feed to people. 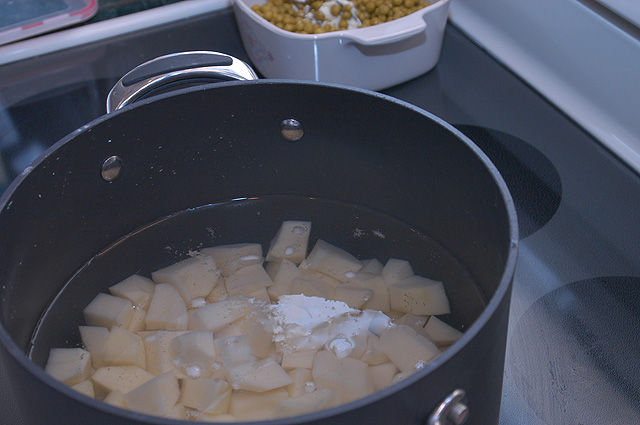 Just as at weddings where you’re supposed to have something blue, we needed something green with our dinner. Peas, please. 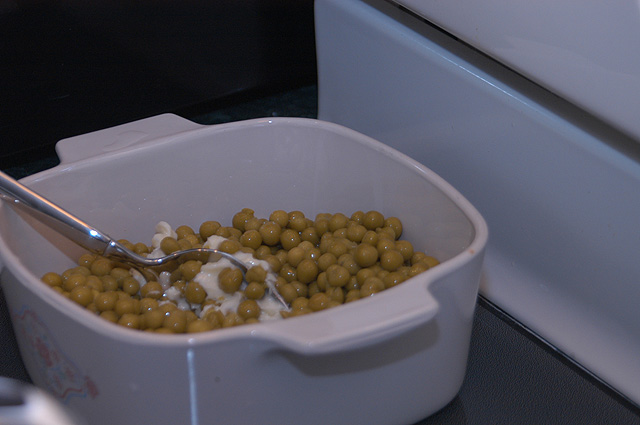 Sliced mushrooms, a little wine, some beef broth, salt, pepper, flour, and water, and presto! It’s a sauce. Or gravy. 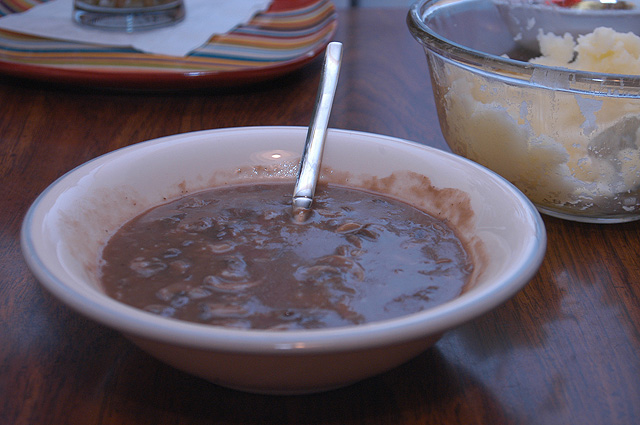 Everyone started eating before I got a picture of the table, but that’s the way things work out sometimes. Besides, I was making the gravy that’s in the foreground from the drippings of the roasting pan. Nice, thick, deep gravy. 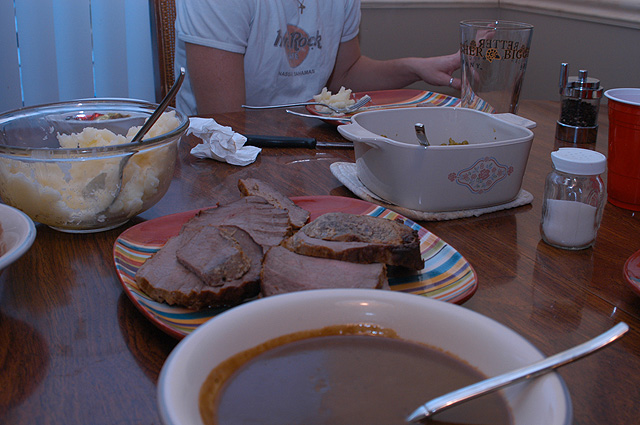 A sample plate. The white stuff is the horseradish cream sauce. A major hit with everyone, and quite simple to prepare, really. 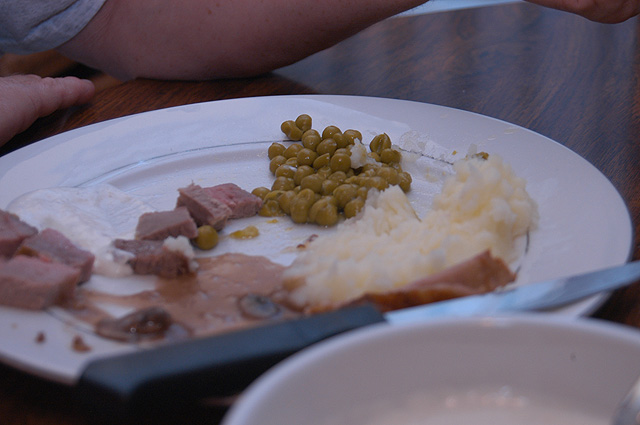 And how did the beef turn out? Fabulous. 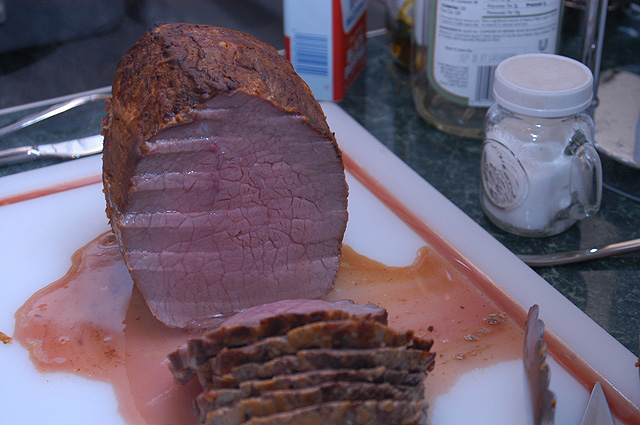 While we were in Publix, the peaches looked and smelled very good. 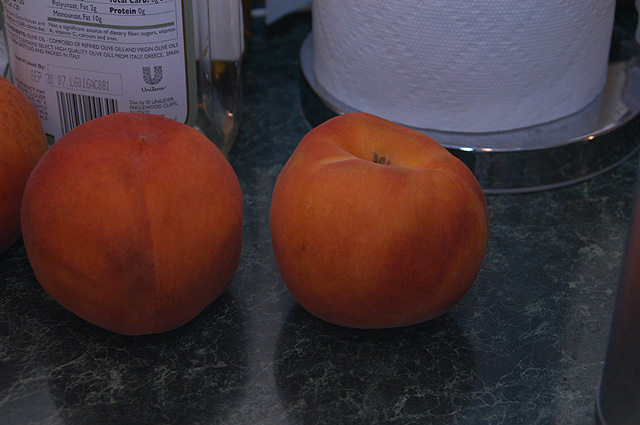 I decided to make some peach ice cream. The peaches had to be peeled, diced, and soaked for a bit in lemon juice and sugar. 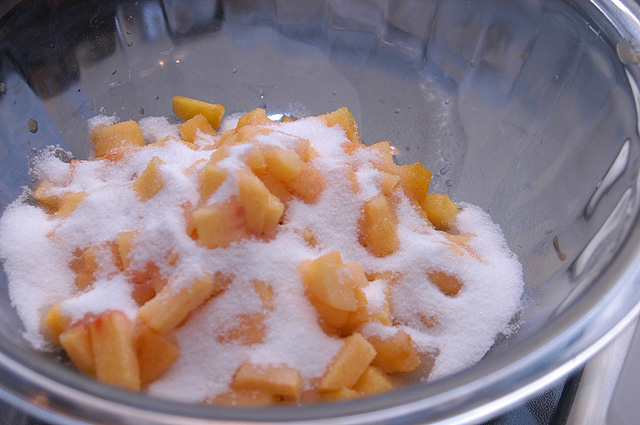 Some egg, sugar, cream, milk, and the juices from the peach bath were mixed and dropped into the ice cream maker. The peaches went in for the final 5-10 minutes of the churn. How did it turn out? That, my dear readers, will have to wait until tomorrow when the ice cream is fully frozen and gets a good taste. Although sample tasting – for quality control purposes, of course – indicates that it will be just fine…

Our totals for the evening.

There were leftovers as well, and since Monday is probably going to be busy for all of us, those will likely serve as at least lunch. Now to come up with a menu for Tuesday’s spech night.