Wednesday night marked the last of the speeches my sister had to prepare and give for her speech class. I didn’t mind the speeches, particularly. I certainly didn’t mind cooking for everyone who showed up to be part of her required audience.

Earlier in the day, I’d decided that I really would prefer not to run to the store for anything, so rooted around and cleared out the pantry a bit. We were a bit disjointed Wednesday evening; people were drifting in at various times, making a true sit down meal impossible. What’s a cook to do when work beckons? 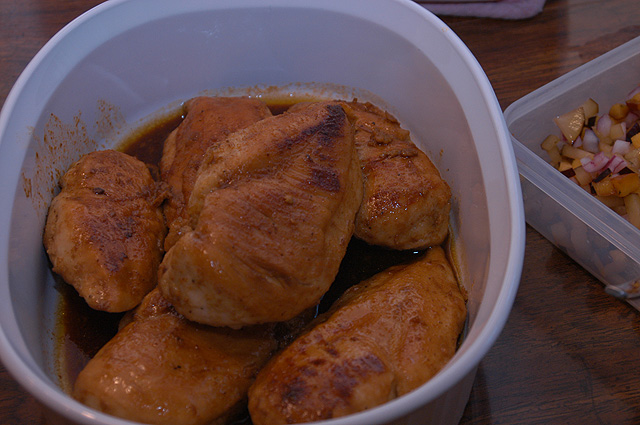 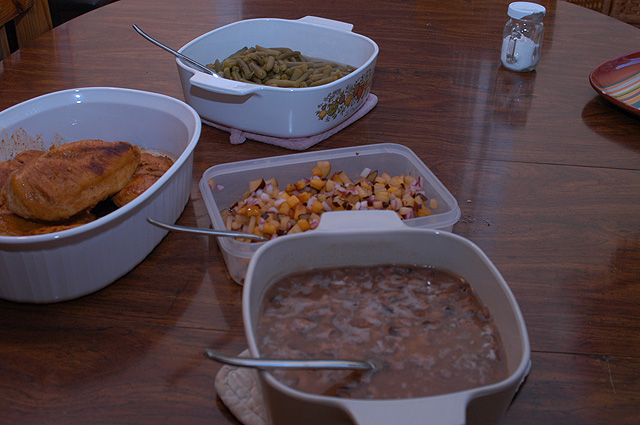 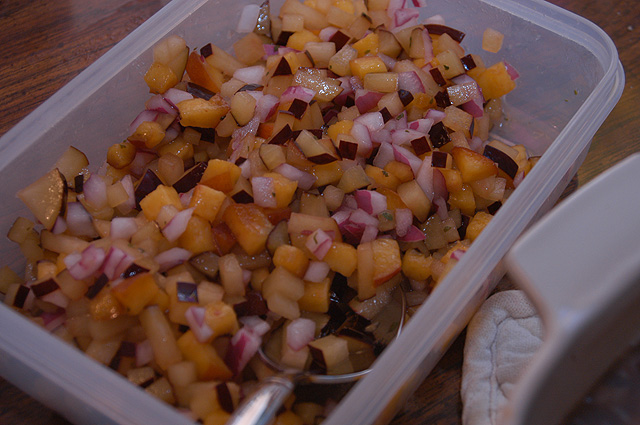 The peach ice cream I’d made the other day turned out quite well indeed, and that was available for dessert. One of my sisters also had a cappuccino with me after dinner and after the speech. While I’d thought there would be quite a bit of leftovers, since one of the boyfriends said he wasn’t going to eat, we only had a single chicken breast, a bit of the sides, and almost no salsa left over, as he changed his mind and everyone had a decently sized portion. Except me, of course.

I’m just not hungry of late, which is creating some friction with the fam. Today’s weigh-in at Publix, where I stopped to pick up a couple of miscellaneous items, was 106. To eat today, I’ve had a bit of homemade chicken and rice – which I made Tuesday evening, and it turned out very well, thankyouverymuch – some coffee, and Reese’s. However, I am expecting a delivery of some fried grouper from a local fish camp, and we’ll see how much of that I can down.

I’m not sure exactly what the problem is, really: I know I need to eat. I get full very quickly, my jaws and tongue tire rapidly when eating “real” food, the formula (and just about everything else) is making my stomach upset, and certain smells are making my stomach turn. To add to all that – and this could be rather gross for some people, which is why it’s in the extended part of this entry – the discharge from around the tube entry smells, as it always has. It’s not very noticeable to anyone else, but to my very sensitive nose, it is, and the scent of old formula wafting up when I move in a certain way and the air moves up is offputting even if it is not overly grotesque. This will be there as long as the tube is in, of course: a bit of discharge of gastric juices is unavoidable, since it is after all a hole in the stomach and abdominal area, and that hole is constantly trying to heal and close itself, which is prevented by the tube itself.

September will mark one year since I began radiation and chemo. One year since the tube placement was done. One year since I lost a large portion of time and then had to start pulling everything back together – something that continues, slowly, to this day and that will continue for quite some time to come. One year since I lost the ability to do things I used to be able to do without thinking and completely lost the ability to do some things forever: stick out my tongue. Play the trumpet or French horn. Lift my left arm above shoulder height when it’s fully extended. Turn my head in a full range of motion. Eat normally.

I suppose thinking too deeply on this sort of thing really starts that snowball rolling down the hill. Some days are like that. Sorry if you’ve read this far looking for some kind of uplifting ending to this post. It won’t happen today.

One thought on “Speechifying”