“You want to live where?”

“A bit further out than I live now.”

“How much further out?”

“About eight to ten miles or so.”

“Why on earth would you want to do that?” 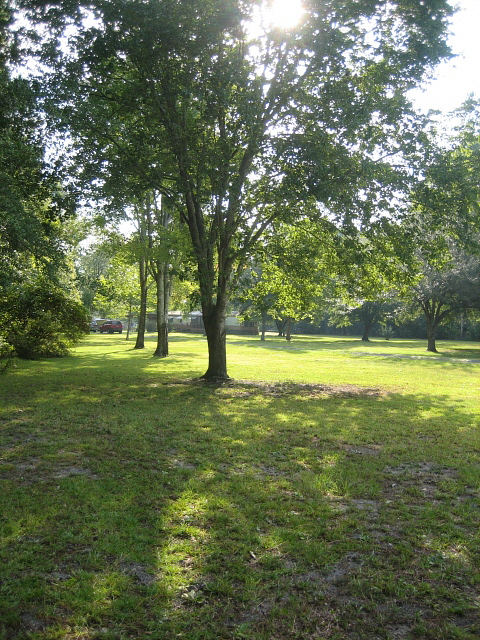 We went to the property Wednesday morning. Our realtors, patient people that they are, appeared on our doorstep just after 8 AM, awakening me from a strange dream whose details continue to escape me: all I know is that I was happy, once my feet had hit the floor, to be awake rather than asleep. Our appointment to see the property and the buildings on it was for 9 AM. We had another appointment after that to see a different property, but everyone knew we were seeing the second one just to see it, and that the first was really the only one that interested us.

As I had a dentist appointment scheduled for 11, I drove myself in the event we went to the point that I would have to haul ass to have yet another party poke around in my mouth. We arrived just before 9. It was a stunning morning to look at the place and walk the grounds. 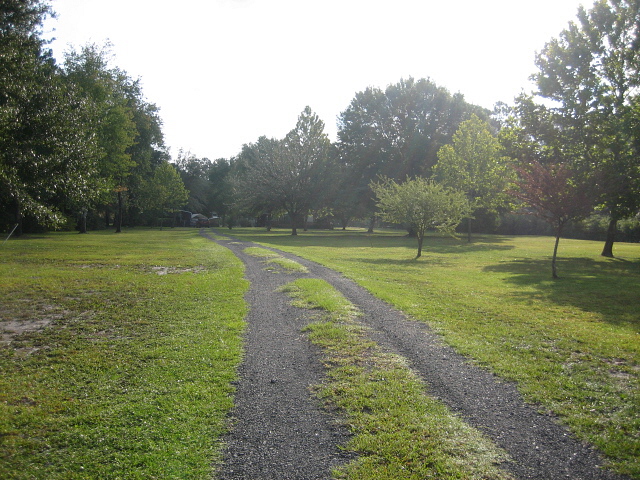 The evening temperature had bottomed out around 70 degrees, and by the time we got to the property, it was only 75, with dew still glistening on the grass and the sun making its climb into the sky from behind the rear treeline. We met the lady of the house, who said her husband – a transplanted Nebraska farmer – was off at the doctor, but she’d be happy to show us the two places, although not walk the property, as her health was not up to the task. No problem, said I, I’ll walk it alone – which is my preference, without someone blathering on in my ear to disturb the flow of thoughts in my brain and disturb what is almost a frightening stillness in the morning air. I requested permission to take photos of the grounds. “Certainly,” says Fran. “Just don’t set us on fire,” she added, smiling. We laughed, and I left the four of them talking while I walked the entire perimeter of the property. 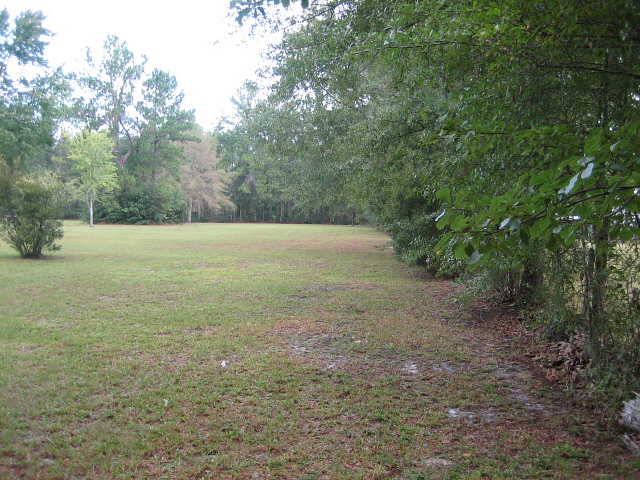 I walked north along the fenceline and found this guy digging furiously for bugs while it was still relatively cool. 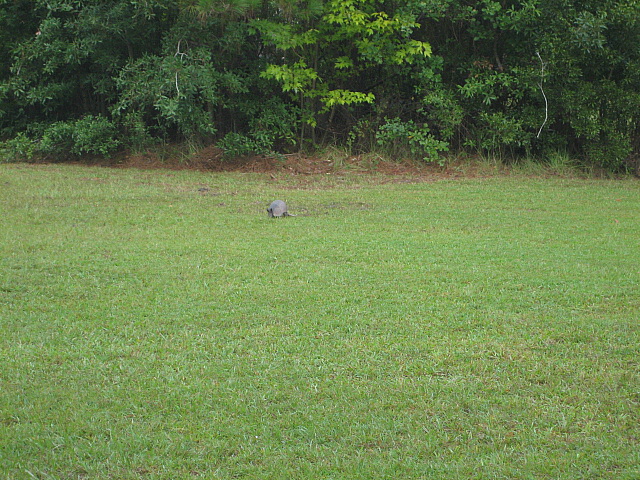 He was so preoccupied that he didn’t realize I was walking up to him until I was about three feet away. He stopped digging, gave a little hiss, and then ran into a circular stand of trees that sits in the midst of the huge plot of cleared land in the rear of the property.

The owners, over the course of almost 30 years on the property, have done a fantastic job of clearing the property while retaining what few hardwood trees were there and planting additional hardwoods. The man of the house is, by the wife’s account, the gardener of the two, and up until a few years ago, had quite the garden going. Now he has what seems to be a million pots of sago palm starters.

The green line is the sagos, to the right is a pile of brush and branches – this is the sort of thing that happens when people continuously occupy a property for a good number of years: piles of stuff – and in the rear behind the marching line of sagos is what used to be a compost pen and what was destined to be converted into a chicken coop, but what is now a receptacle for more brush and some odds and ends. Behind that is the circular stand I mentioned, into which my armadillo buddy escaped my intrusion. 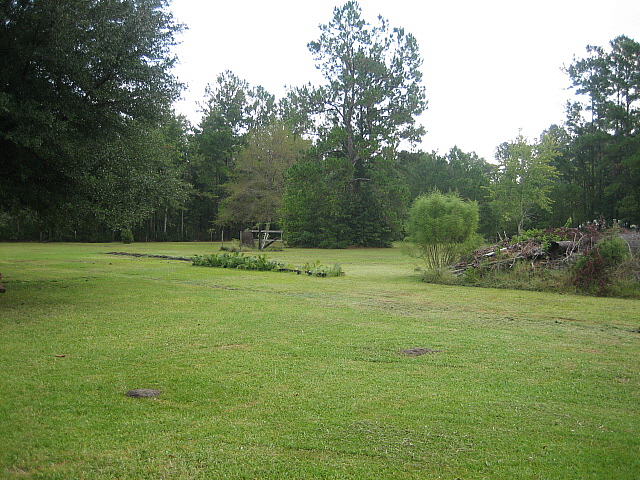 I walked to the front of the property and looked back to the ENE along the fence/hedgeline. 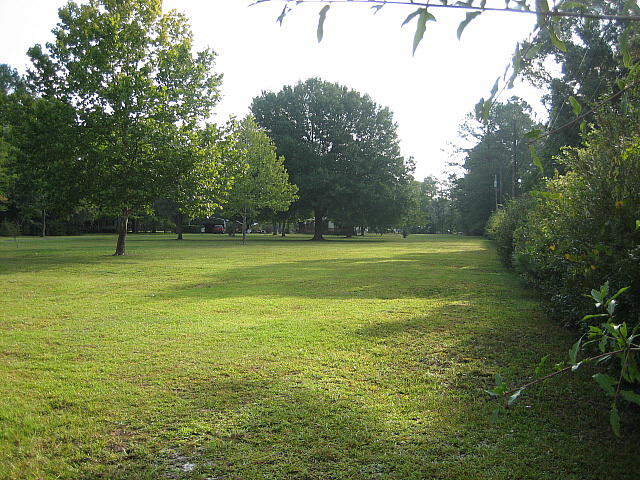 There is also a line of baby sago palms at the front of the property, along the front fenceline near the road. 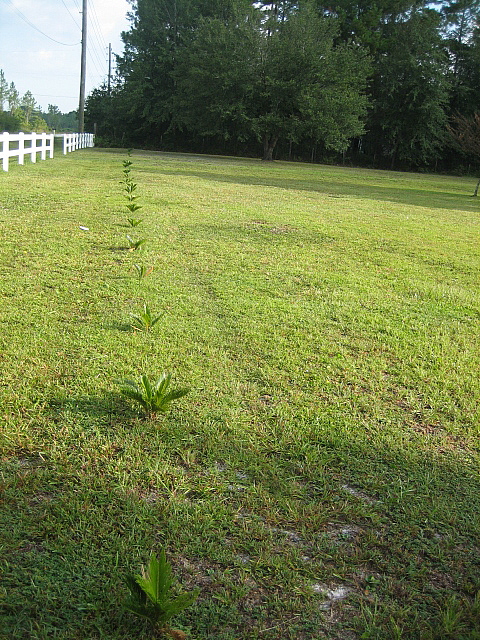 We found more sagos near the little greenhouse, along with assorted other plants awaiting their fates. From the front of the property, I took another shot facing one of the two homes. 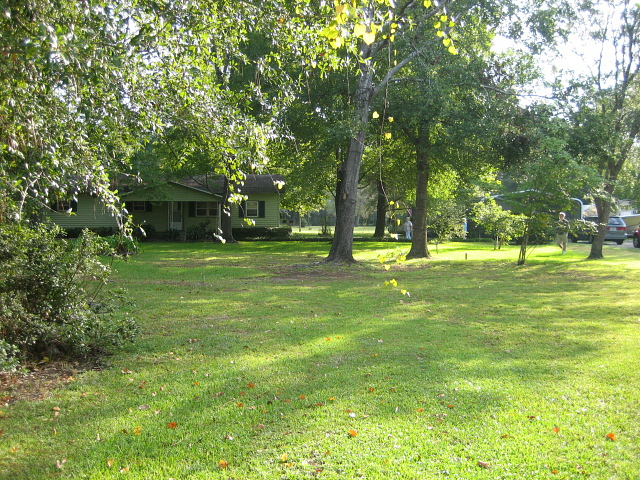 It’s amazing what people will tell you if you let them. The second home was for the woman’s mother, who died last November (in her 90s, no less). They were still working on clearing out the last remaining items, and of course this is hard work – not physically, but emotionally. As she said, though, you do what you have to do. There is a very nice fishing boat on a trailer on the property; this belongs to one of their sons, who also fishes in the annual kingfish tournament held on the shore here. The husband and wife are leaving the property for something a bit smaller as they’re both getting older and both have some health problems.

The stovetops in both homes, along with the water heaters, are gas. This would be a welcome relief from living entirely on the local utility teat, especially since the utility bills in the current place are exceeding $400/month, primarily because the air conditioning unit is too small for a house this size and runs constantly.

“Tell me again why you want to live here. There’s nothing here except a few piles of junk, a bunch of grass to mow, and a couple of trailers. They look nice and all, but come on – it’s trailers, when you boil it down.”

“Yes, I know. But tis is not to say that I’ll be living in a trailer for the rest of my life. It’s a temporary waystation. See all that land in front? Perfect for a new house, lots of room, no worries about spacing, facing issues on the lot, or anything else. And the land won’t need mowing everywhere – there’s a rather large garden area envisioned on the back side of the property, about where the man had his before he gave it up. The piles of junk? A dumpster costs $50/day: you load it up, they haul it away and dispose of it. This is what happens when you eye a piece of property rather than just a lot where they’re going to toss up a house with no yard and no room for much of anything at all. And there’s this, too.” 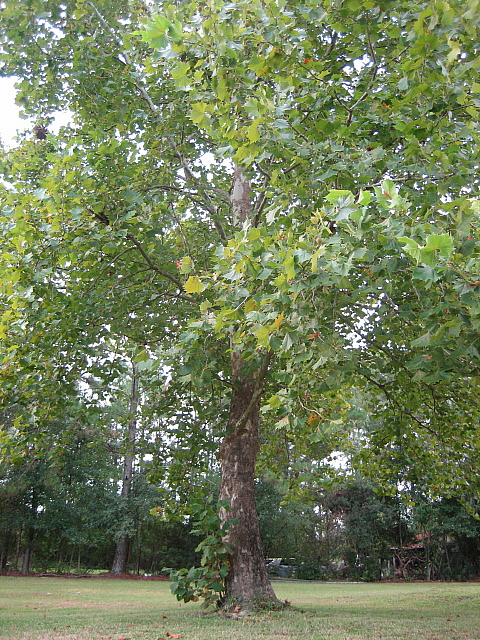 Now, the fun begins: finding someone to finance the damn thing. Random statistic found during research: one of every three homes in Florida is a mobile (or, rather, manufactured, as they call them now) home. The problem is that a lot of banks and mortgage brokers – including my own, where I prequalified to buy just about any existing or new home construction I would want otherwise – don’t want to touch anything like that these days. This sort of sent me into a tailspin after I took myself off to visit the dentist – and weighing myself three times at Publix while waiting for a prescription to show myself that I was really seeing 102.5 didn’t help – because I don’t want to see this slip away for this reason. But there has to be someone out there to finance this sort of thing, because the people living on the property just refinanced three years ago, and that random statistic up there means that someone is backing all these people. I just really, really want the next person they back to be me.