Oops, sorry, that’s not right at all. 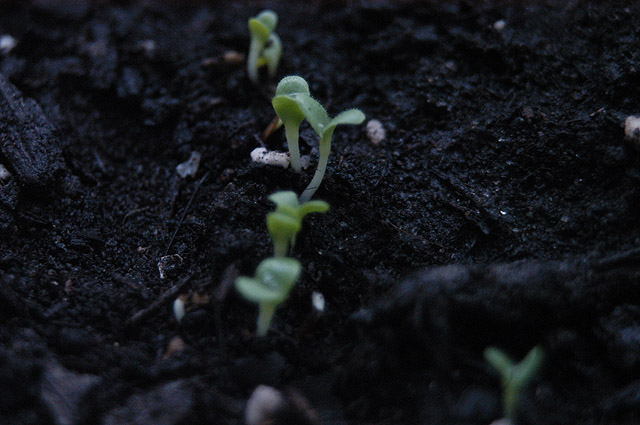 Yes, the lettuce has already sprouted. The other day, my mom sowed the peas while I transplanted the broccoli and collards, and tonight, we finally have the rain we’ve been awaiting for three days to give them as deep a soak as they can get for however long this lasts.

What else is sprouting? The zucchini, the leeks, and two of the tomatoes. I’m always amazed by new life.

We also have kumquats ripening on the tree, and I managed to find a place to send a meyer lemon tree here – I also ordered an orange tree and a lime tree from that same place. There are basil leaves drying on a rack in the kitchen, and we used some fresh parsley in the rice pilaf I made earlier this week. I’m very pleased with all this activity popping up around us, but I do have to remind myself to keep things in check so I don’t take over the entire backyard as a garden.

…to get to the center of a person’s brain?

Let us say, for the moment, that there has been a significant issue with a server – like a massive hard drive failure – that requires everything on that server to be restored to another server. A newer server. Let us further say that obviously not all the settings on that newer server are going to be identical to the older server. Let us suppose that a web site requires a particular unsecured setting in order to operate, and that setting is no longer the default serverwide – that is, the setting, for security reasons, needs to be made on that one particular site that needs it.

Given all that, do you:

A: Constantly complain about the time it’s taking to get everything restored.
B: Continually update a ticket asking when the restore is going to be completed.
C: Display gross ignorance about anything technical by telling support to “put it all back the way it was”.
D: Complain that customers should be notified about “upgrades”, despite being told multiple times that no such “upgrade” was done on an arbitrary whim – not that the upgrade would have anything to do with the problem you’re having anyway.
E: Repeatedly ignore questions you are asked and the things you are told by support.
F: All of the above.

If you answered F, then you’re absolutely correct and you have identified the actions of clients who make up our own personal hell.

When we’ve been working 20 hours straight to get the server back up, the accounts restored, and cleaning up all the inevitable cleanup things that need to be done, doing all of that is going to make us very, very cranky. And we’ll note for you that it’s rather offensive to imply that we just sit around all day throwing rocks at a server trying to make it crash just to create more work for ourselves because we have nothing else we’d rather be doing or that we did something just to do it to you, personally. Free tip: you are not that important, and the world does not revolve around you, even though you’d like to believe otherwise. You are just like everyone else, except when you engage in F (All of the above): those times, you’re ruder and more unlikeable than everyone else.

But those of you who understand that shit happens, drives fail, and techs work their asses off because they do care: you’re tops in our book, because you use your common sense, even if you don’t understand all the technical mumbo jumbo. Thanks.