If there is but one indisputable fact about Thanksgiving, it is this: there is no guesswork involved in what you’ll be eating the day after, the second day after, and possibly even the third day after the feast.

Our work for the gathering began on Monday, with the hunting and gathering portion of our show. My mom and sister went off to Costco and Publix, bringing home all the assorted puzzle pieces that would make up our meal. Tuesday and Wednesday were reserved for getting some things done in advance of the horde descending on the house.

Yours truly was in the midst of a couple of rather serious server issues, so my own prep was seriously behind as we closed in on the day of the turkey. But other people got some things done.

My brother made a tart, from scratch, tart shell and all. 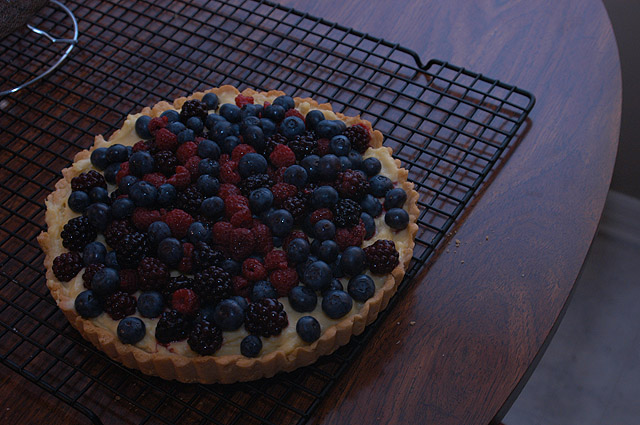 My mom made the mini shells for her salmon mousse appetizers, a couple of small lemon loaves (which everyone forgot about and no one actually ate – more for us!), and a carrot cake, shown here in all its naked glory after baking but before frosting. While she was mixing the batter and pouring it out into the sheet pan prior to baking it, she brought it over. “This looks like a pan of vomit,” she said, and I agreed. I can’t stand carrot cake. 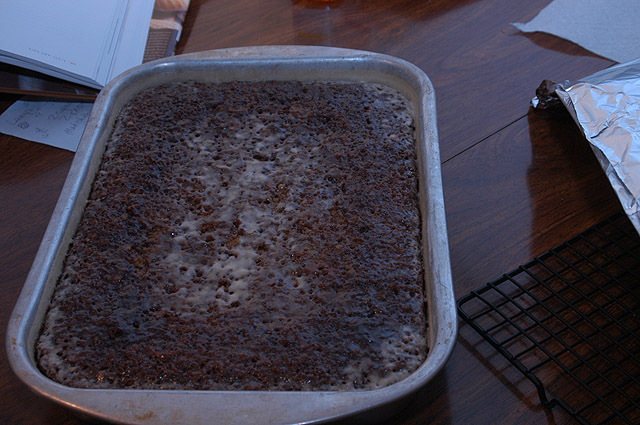 But there is something for everyone, and between bouts of server babysitting, I got both turkeys in the brine. Fat Man went into a regular salt water brine, with peppercorns, garlic, and bay leaves. 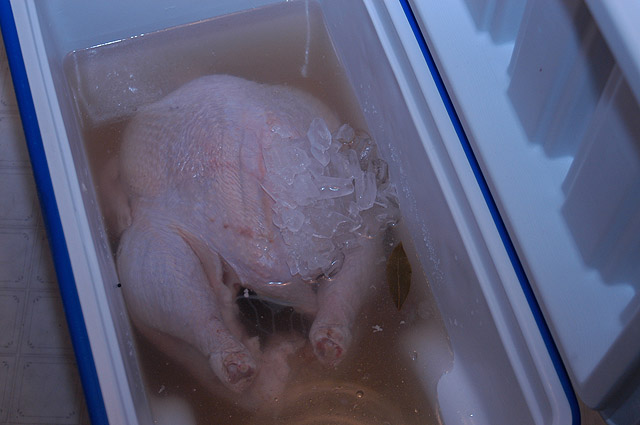 Little Boy went into a honey brine in preparation for his date with the smoker. 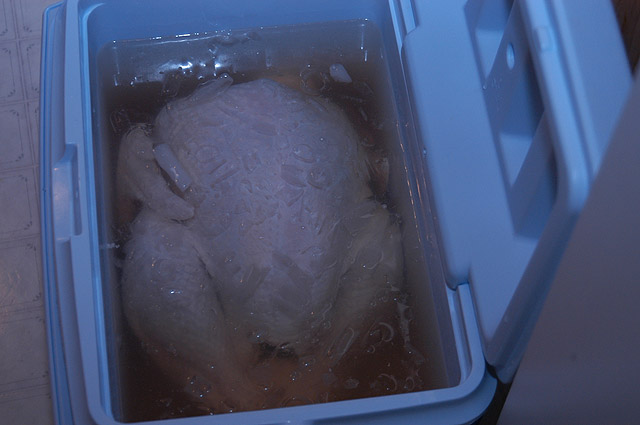 They both chilled out overnight while the rest of us went about more prep. I started some bread dough for a whole wheat loaf, and mom put together the veggie mac and cheese, since we had a couple of vegetarians showing up and needed just one more thing to feed them. We cleared some space for table setups, looked over our timeline for the big day, and then hit the sack – they all did, anyway. I stayed up and did some more work, and finally decided that a little bit of sleep would probably be a good idea.

The next morning, early (but not terribly bright after only two hours of sleep), I put the smaller of the birds on the smoker. In the meantime, the bread and the mac and cheese went into the oven. 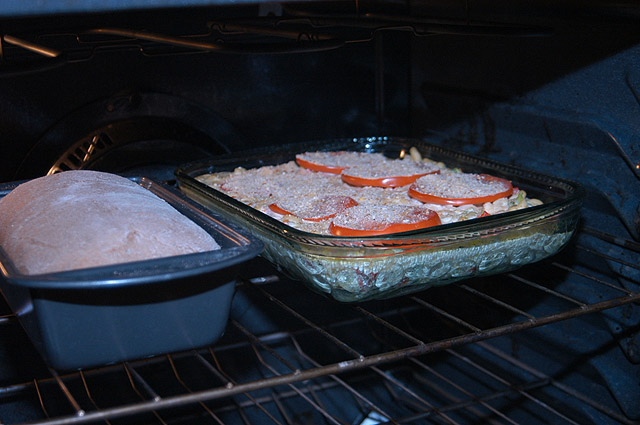 I got a really nice rise from the dough, and the bread was lovely. 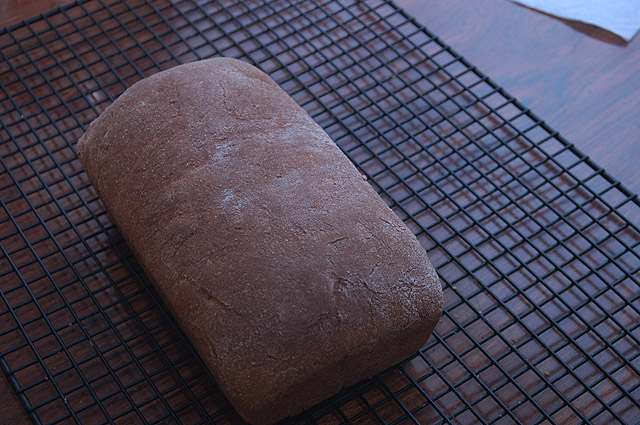 As was the veggie mac and cheese, which of course had to be sampled by my mom and sister to make sure that no one would be accidentally poisoned. Or something. To avoid marring the picturesque surface of the dish, they had a secret tasting. 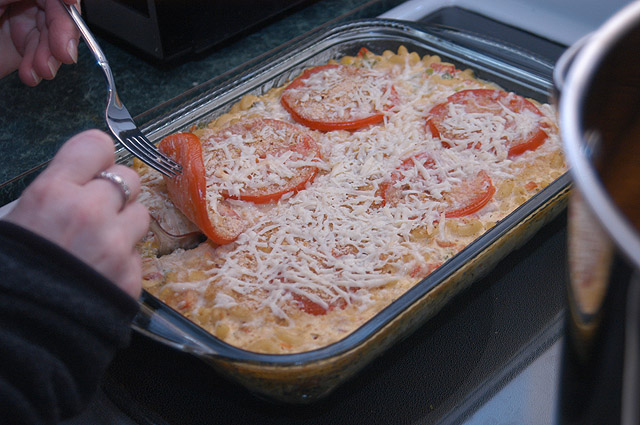 These had to be finished first, as we needed to get fat man – all 21 pounds of him – in the oven and going. He was our traditionally roasted bird: aromatics in the cavity (carrots, onions, celery, bay leaf, salt, pepper, and a few lemon quarters), herbed butter under the skin (sage, pepper, garlic, a touch of thyme, butter), rubbed with olive oil (for nicely browned skin), and then sprinkled with a light touch of salt and pepper. 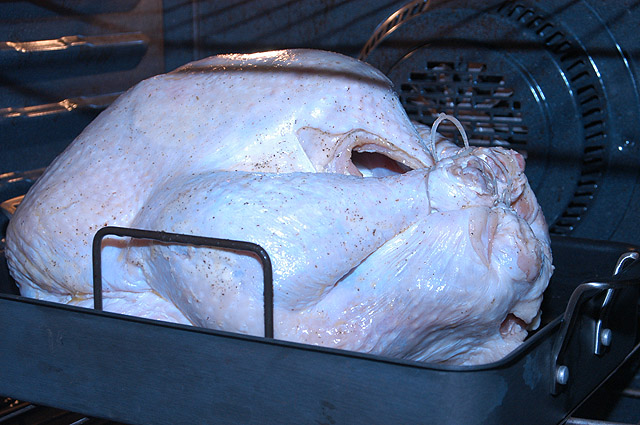 The cats, as usual, were no help… 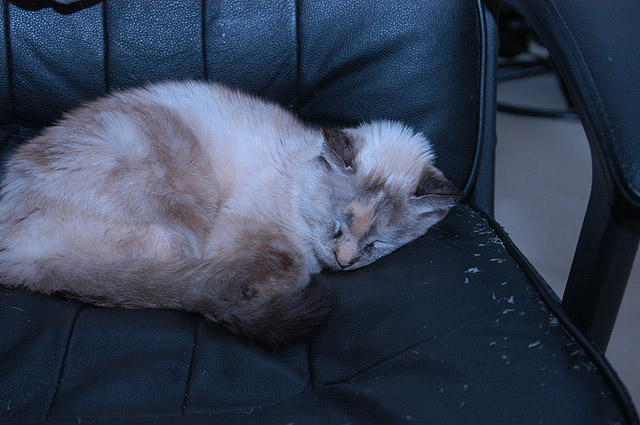 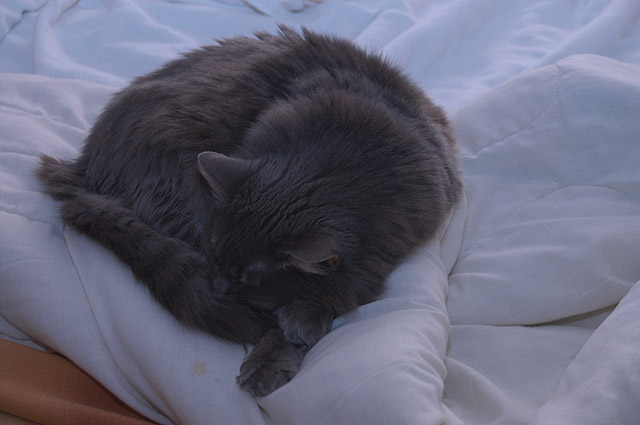 You’d think for a species plotting to take over the world one day, they might be a little more energetic once in awhile.

By this time, it was really starting to smell like a feast was about to happen, both indoors and outdoors.