Winters in Florida can be rather schizophrenic: almost 80 one day can be followed by a 50-degree day with lows at or below freezing.

We’ve had a couple of weeks like that now. A few days of spring-like weather followed by a few days of actual winter weather. The other day, we had a real, hard freeze overnight. So, in come all the plants that could be moved, and we covered up the peas, broccoli, and collards to help them through it. Before covering those, though, we had to have a little harvest.

A handful of sugar snaps. 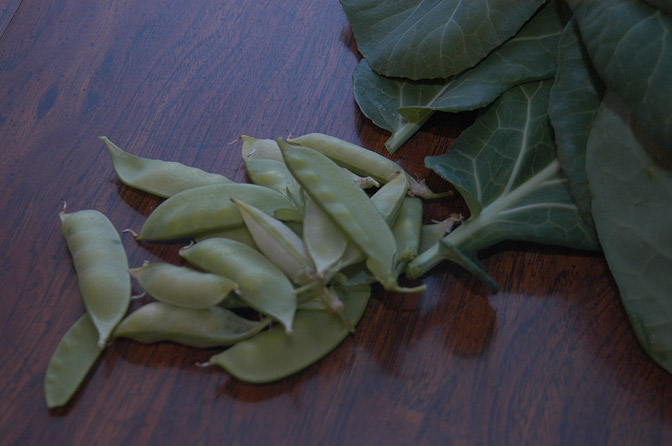 A bunch of collards. 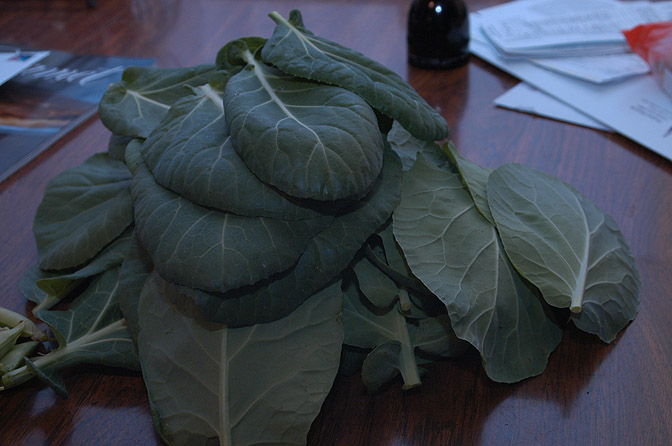 The next day, we found this on top of one of the storage bins. 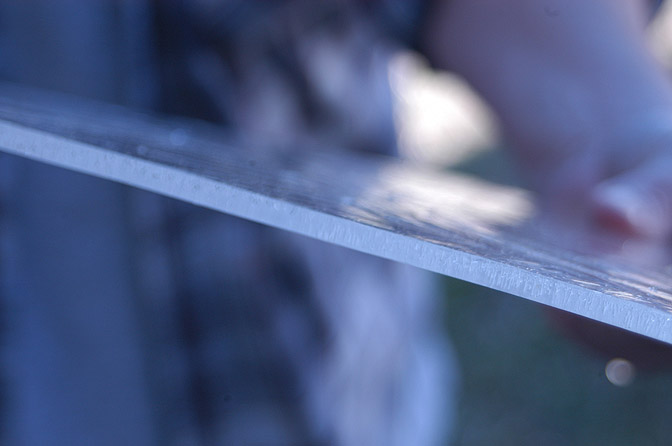 That is real, live ice. Thick, too. 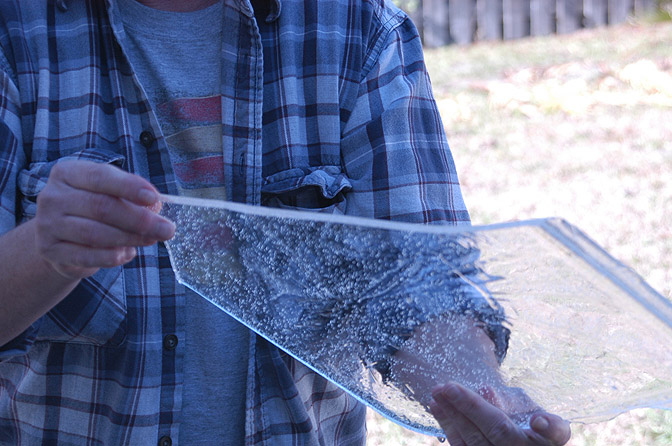 Fortunately for all of us around here – where people barely manage to get by driving in the rain we get on a regular basis and couldn’t possibly drive on the ice we get on rare occasions – this storage bin was in the shade. The other ice that had formed overnight melted very quickly.

The longest prep time on both of these is with the chopping and slicing. The spring roll ingredients: cabbage, bok choy, carrots, leeks, red onion, sweet yellow onion, mushrooms, garlic, a touch of soy, a splash of rice wine vinegar, salt, pepper, and five spice powder. All of that was sauteed and then rolled in pasta wraps this time, rather than rice paper, then given a fast fry. 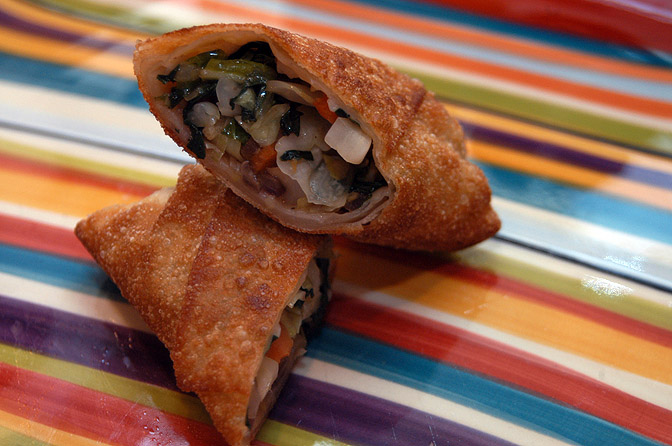 The fast frying ensures that they won’t be greasy, and keeps everything from turning into a shell on which you could break your teeth. 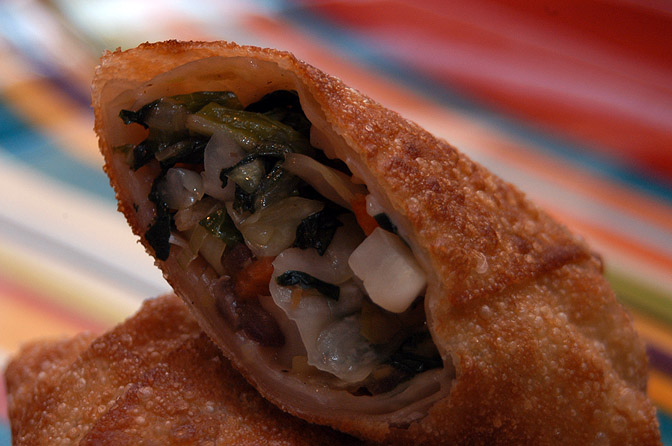 My sister was excited, and did a happy dance for us. 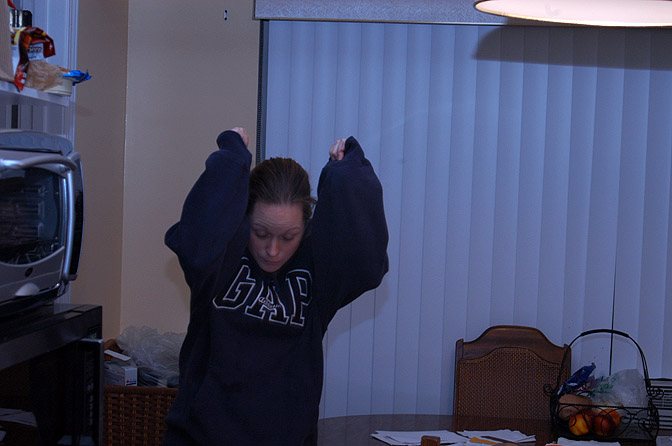 I then turned my attention to the quiche for the rest of us, carnivores that we are. The idea started out simply, with ham and cheese, and perhaps some spinach thrown in. That, however, was just a jumping off point. 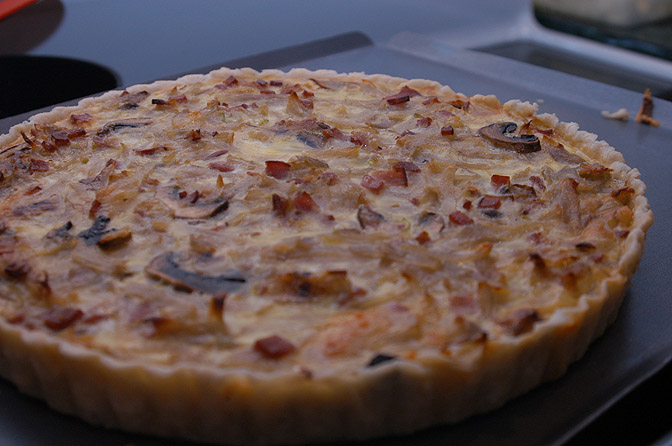 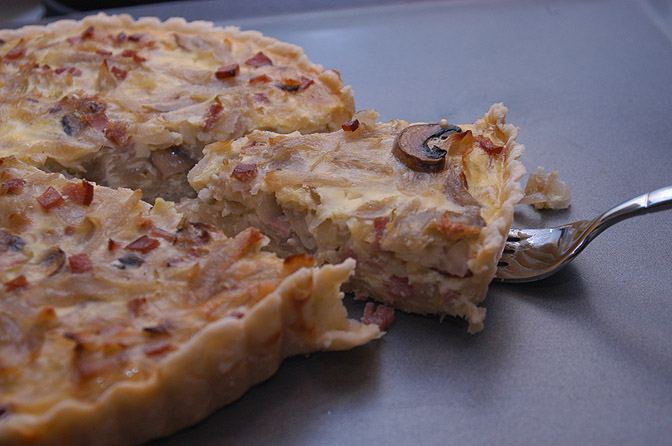 That went into a homemade pastry shell, and then was topped with a milk and egg mixture that also had salt, pepper, and a touch of red pepper thrown in.

Forty minutes later, a fabulous quiche with a super flaky crust. It will be just as good in the morning for breakfast. 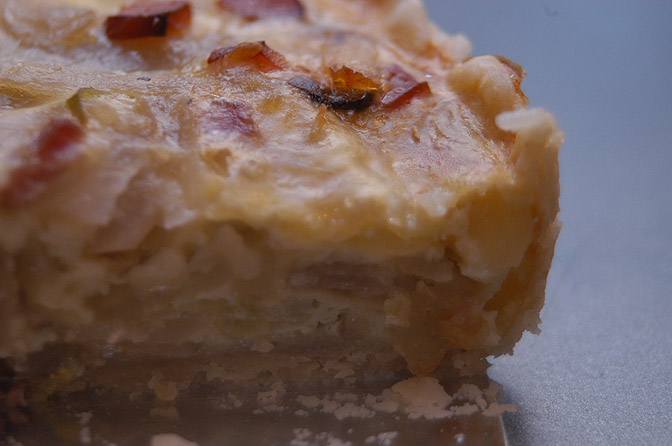 Back to our menu planning: I asked my mom if we should have hummus or chickpea salad or both. Both, she says, since you’re making it.

Both it is. I’ll be able to make these two on Thursday, and hopefully everyone will stay out of them until Saturday. I also need to whip up a batch of barbeque sauce, since the last batch I made is finally down to nothing, and the rub for the ribs. Oh, and I have dough for four loaves of bread chilling out in the fridges that will need to be rolled, bathed with the cinnamon and raisins, given the final proof, and then baked off. We have three servers coming in Thursday, too, so it looks like another busy day around the HQ for me. Since that is the case, it’s probably also time for me to grab a nap.