“Trouble” might be too strong a word, really. It’s more of a minor inconvenience.

The problem is this: the large smoker – which, by the way, I adore – is more suitable for large jobs. A wide expanse of grill area, a large smoker box: it’s perfect for smoking 40 pounds of ribs at a time. Or even about 20. But the smoker is fickle. It also requires babysitting, to keep the fire fed and to try to keep the temperature in the desired range. Things that take quite a long time to smoke, like a pork butt, which can take up to 18 hours, require a lot of fuel and a lot of attention every 20 minutes to keep things where they should be. If the weather changes abruptly, as when a sudden storm rolls up from the west, bringing much cooler with it, even more adjustments have to be made to keep the smoker aimed at its target. In addition to that, for smaller jobs like the aforementioned pork butt, or if I wanted to smoke a chicken or small turkey, or anything else, it leads to a lot of waste (of heat, of fuel, of time) for a smaller portion. This is why we as a family don’t have homemade barbeque more often. And forget about cold smoking anything, like bacon or sausages or fish. It just isn’t suitable for that kind of job.

There are solutions to those issues, of course. There usually are. This is mine. 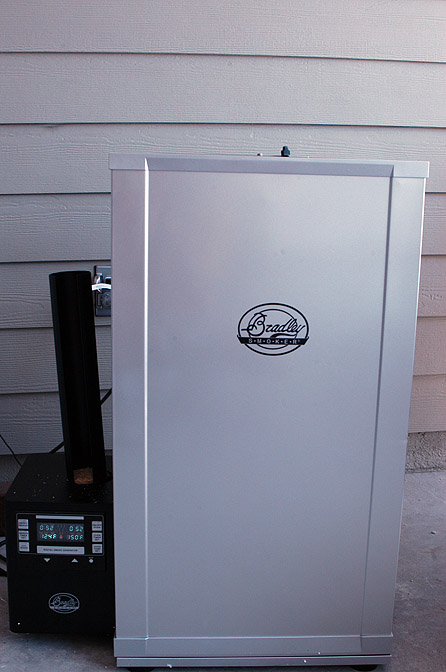 This smoker, made by Bradley, is about the size of a mini fridge. It’s also electric, with digital controls for temperature/time and smoke/time. Instead of opening up bags of hickory chunks, as I do with the big smoker, I feed it pucks (bisquettes) of hickory and oak. 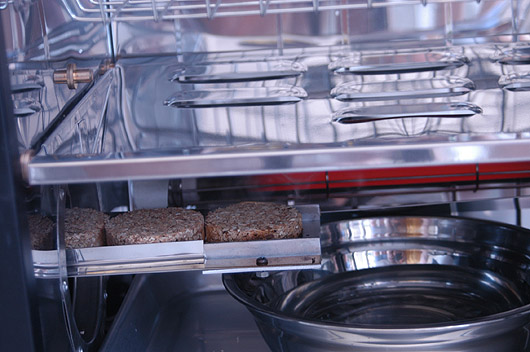 I also ordered some apple and maple pucks as well, wood that is difficult to find around here for the large smoker. The last part of the lip there heats the puck and it will provide about 20 minutes of smoke. When the puck is spent, the feeder pushes it off into the bowl, which is filled halfway with water. Supposedly, according to all the literature, this saves you from ingesting certain types of resins and soot that you might normally get with the large, traditional smoker, and this is supposed to be healthier. But if you’re smoking a bunch of ribs and pork butts, I’d say that “healthier” probably isn’t the topmost concern on the list. Still, it’s a handy system, because it allows you to set the time, temp, and how much smoke you want, load up the feeder, and then go about your business without having to check on it every 20 minutes. The only thing to remember is that the timer can only be set for a certain limit – a safety feature, I’m guessing. It’s simple enough to get around that, though, by turning it off briefly and then turning it on again, setting the time to the highest limit.

That’s handy to know, of course. Because the very first thing that went into the smoker after it was seasoned was this. 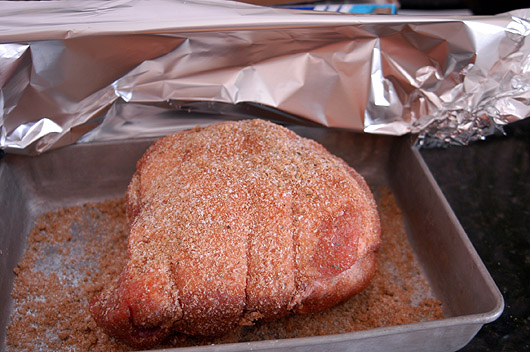 This was about a five and a half pound pork butt, rubbed and left overnight. The next day, it went on the smoker, with a full line of pucks and the temp set at 200. I couldn’t resist peeking in on it every so often, and of course with any new toy, you’re always fussing with it a little, to tweak it just how you’d like it.

But after it reached an internal temp of 195, where the collagen starts breaking down and results in that fall-apart result we all love for pulled pork, we had this. 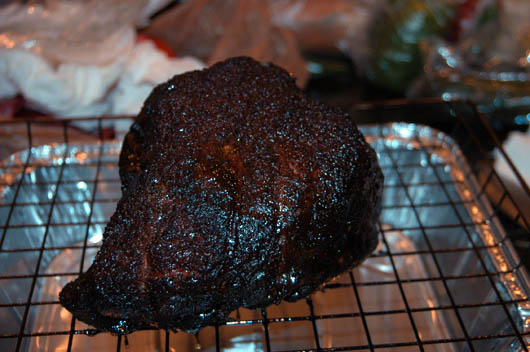 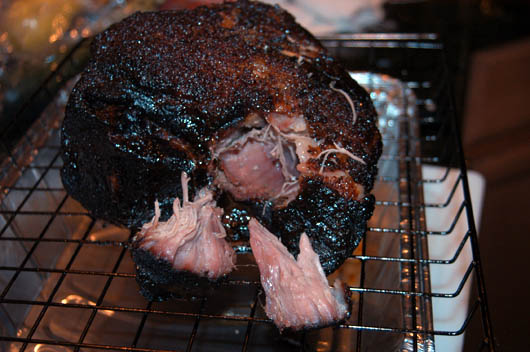 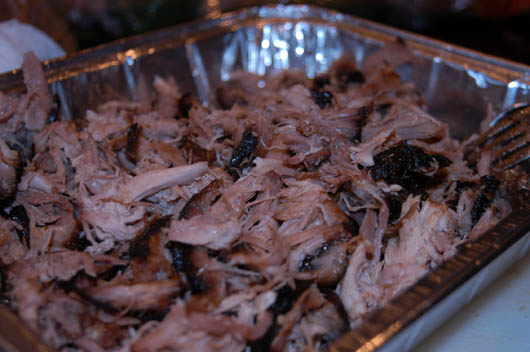 I have another one in the fridge right now, rubbed last night, and waiting for a ride on the smoker. It will make a great dinner tomorrow night if I start it at midnight tonight. With some sweet silver queen corn and some baked beans – and maybe even some cornbread – a fine meal.

The smoker? Also handles cold smoking. Now, if I can just find a provider who handles pork belly, homemade bacon, here we come.

One thought on “The trouble with barbeque”