The beauty of having a smaller smoker available to you than the gigantic, honking smoker that you generally use to smoke 40 pounds of ribs at a time for large gatherings is that…well, it’s smaller. Since the smaller smoker has electronic controls, there is also no constant temperature monitoring or feeding of the fire. All of this makes it much easier to justify experimentation, and easier to pawn off whatever comes out as “dinner” for unsuspecting family members.

And those factors really make a difference when you’ve decided that smoked turkey breast should be on the menu along with everything else. It also gives you an excuse to test a half breast of about two and a half pounds (and down the road, may even give you an excuse to smoke turkey breasts on the regular basis and pick up a home slicer to slice it about sandwich-thin, then lay a couple of slices between two pieces of homemade bread, with a nice juicy tomato, a ring or two of red onion, a nice slice of cheese, and a little mayo mixture for good measure, then turn that into a panini – but I’m getting ahead of myself).

Since the breast was a half, and didn’t weigh that much, it was brined only for about two hours so as not to have the end product become too salty. After rinsing and patting the breast dry, I rubbed it with a very simple mixture of salt, pepper, and garlic. Then, into the smoker, with some apple and oak to burn.

A few hours later, it was time to test. It looked quite nice. 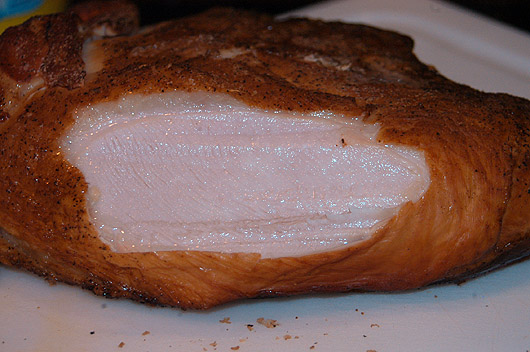 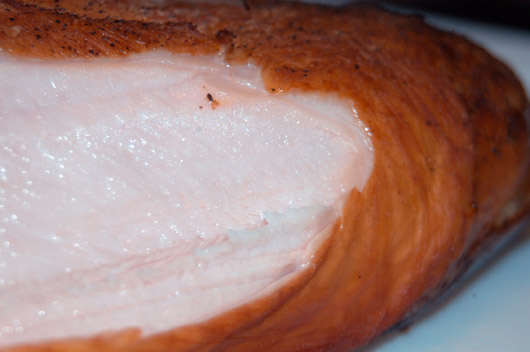 The taste? Outstanding. Another winner, and approved for addition to the menu.