So, my sister is expecting. We found this out last month, but she is such a worrier that she told us to keep it to ourselves until the first sonogram and ultrasound. Sissy.

But we did, and since then have been dealing with all the assorted worrying and griping that goes along with having someone around you who is by nature a little high strung having yet another thing to occupy their worry gene. Given that my sister is truly a beautiful young lady, no doubt the baby will be gorgeous. Everyone is quite excited about the little one who will be joining us sometime in March.

Our first problem is one of food: my sister has not been eating right, well, or enough. Last week, she told my mom that just opening her fridge and smelling the food was making her queasy. The result of this is that she is not eating the way she should be.

The solution to this: have someone like me make a couple of huge batches of tasty, nutritious food, and have my other sister take it over. As an added bonus, some of my other sister’s friends got to share in the bounty and received their own care packages.

Enough of the background chatter, says my Gentle Reader. Just tell us what you made and give us pictures.

First up was one large batch of chicken and rice. Generally, I make this for us and the dogs get to enjoy some as well, but Pregnant Sister is a little weirded out by “dog food”. I sent some over anyway.

The main attraction, though, was stuffed shells, one of my sister’s favorites, and another homemade batch of focaccia.

The dough has to be started first. Even though it’s a single-day dough, it still takes a few hours from start to finish. The dough at rest after the first stretch and fold. 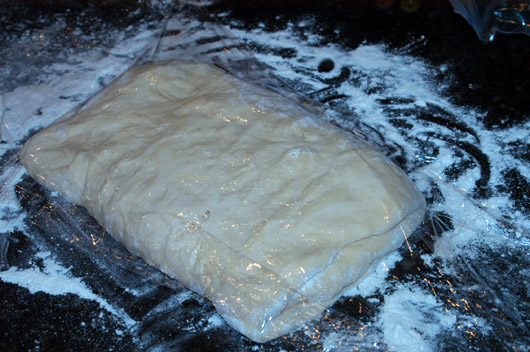 Then it’s time to start the sauce, so it can simmer while the shells are being made. 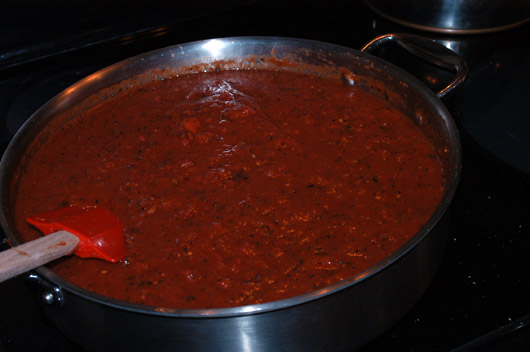 The fam is known to stand at the stove and dip whatever is handy into the sauce and eat it. 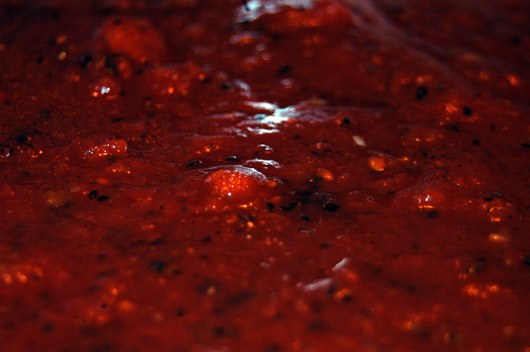 Oh, and did I mention that I made a couple of loaves of cinnamon-raisin bread? 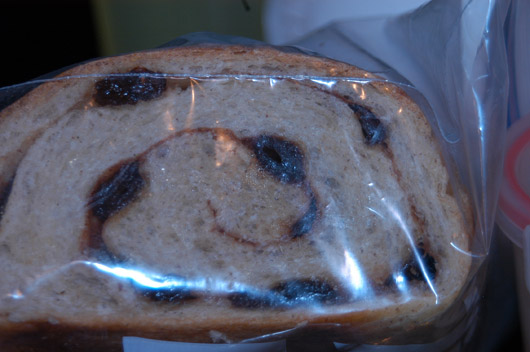 And some roasted butternut squash dip, destined for the Thanksgiving menu? 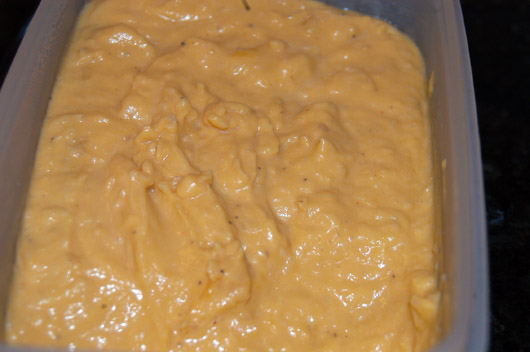 This is some great stuff, I must say. Very simple to make, and quite healthy, too. 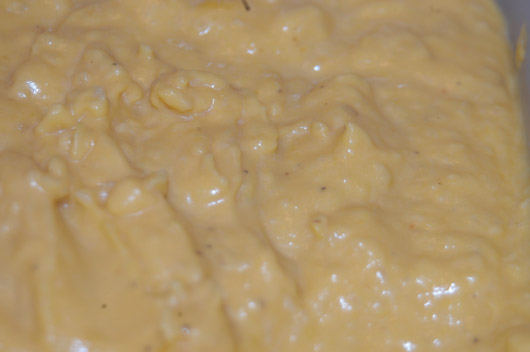 I know – get back the point, already.

The mixture for the “stuffed” part of the stuffed shells. 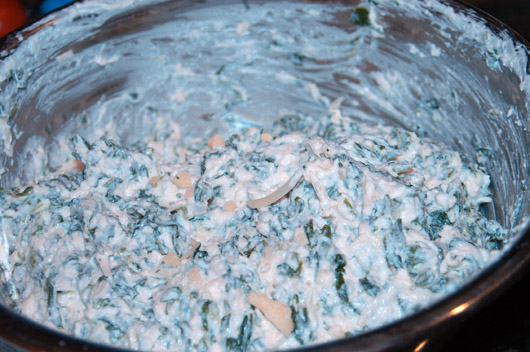 A mixture of cheeses and spinach. 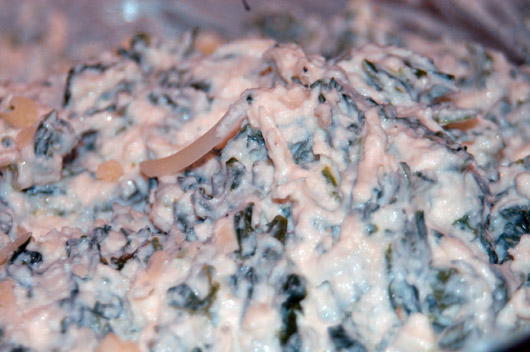 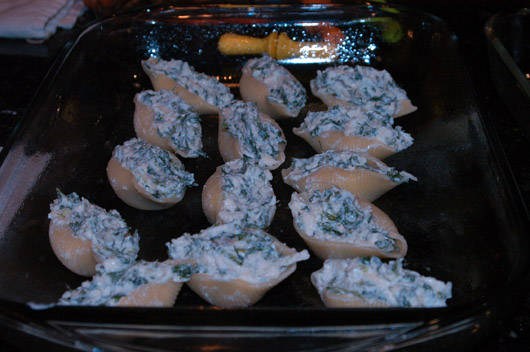 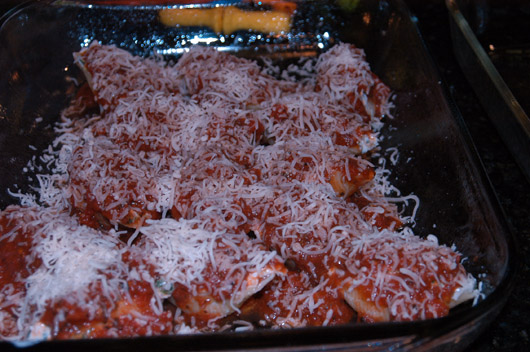 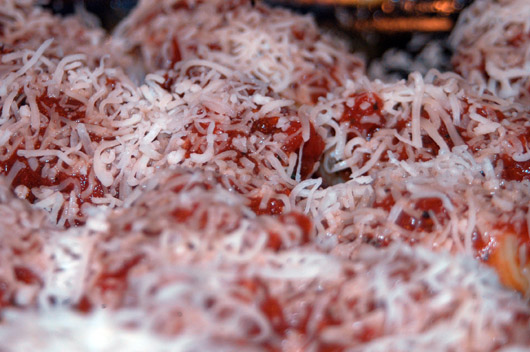 In the meantime, the focaccia dough has been stretched and rested again, then panned for proofing. After the final proof, the toppings: one half with warm herb oil and cheese, the other half with caramelized onions, gorgonzola, and cherry tomatoes. 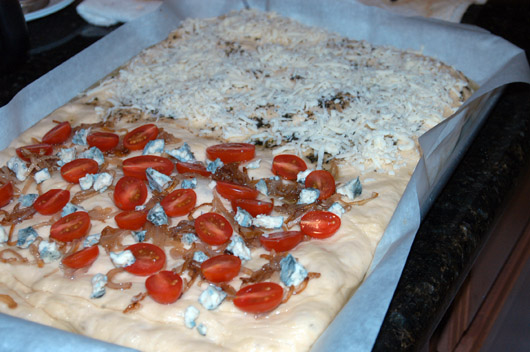 Are you hungry yet? 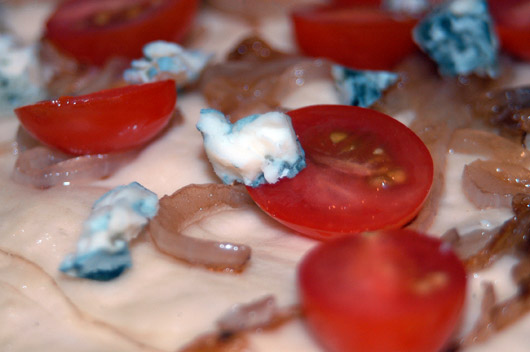 Shells are baked and ready for chowing. 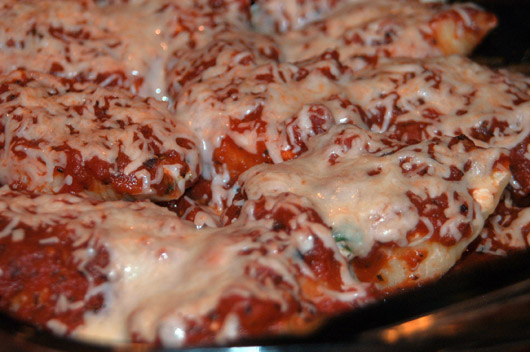 And so is the focaccia. 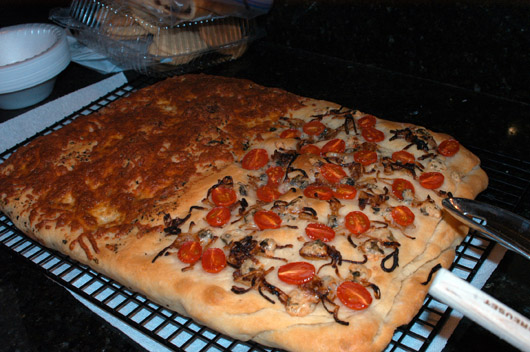 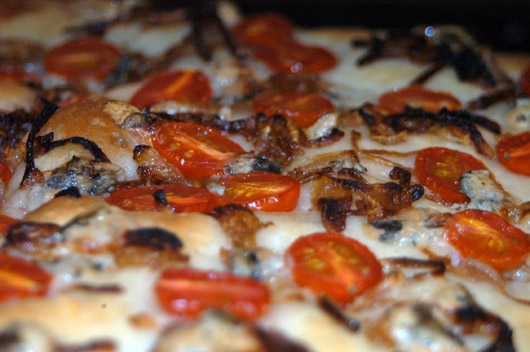 The shells and this bread were divided into portions for Pregnant Sister, her boyfriend, and my other sister’s friends. 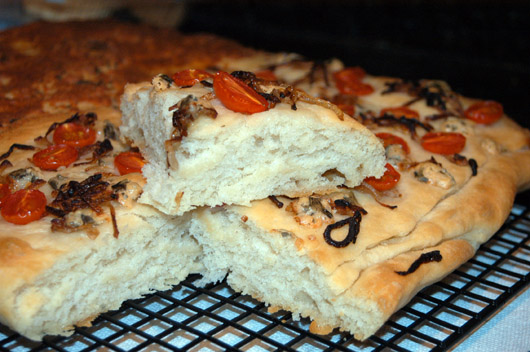 I do believe I could make a fresh focaccia every day and people would gladly make sure there were no leftovers. What is it about bread that calls to us? 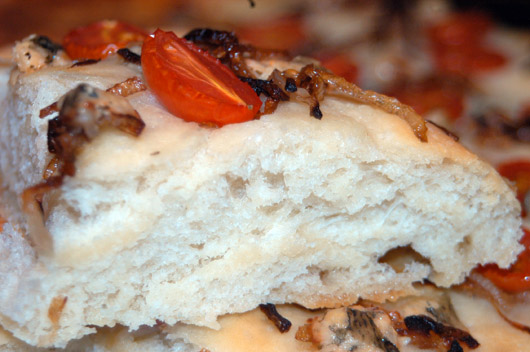 I can’t say I know the answer to that, but I can say that I do enjoy baking it. Like this biga for Italian bread that I made last night. 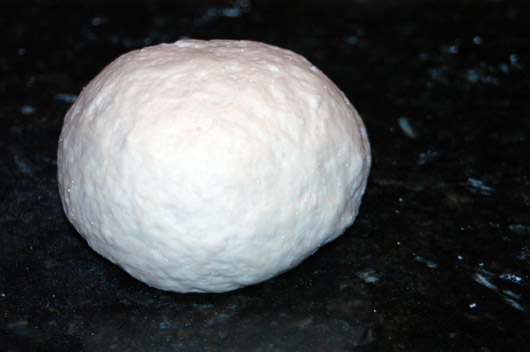 The final product from that starter dough is another entry…