I don’t know why people don’t eat more turkey throughout the year. Not thin sliced turkey from the deli, but roasted or smoked turkey. It’s good at more times than just the holidays, people. I like turkey better than chicken, to be honest, and could probably eat it every day for lunch and not be bothered terribly much (although those who have lived with me could tell you that I can be rather boring with my meals sometimes, since in a lot of ways, to me, it’s just a stopping point on the route from point a to point b in any given day).

But when you’re expecting a great number of people to show up on your doorstep, hungry, it’s probably best to have a trial of the roasting method you’ll be using on the big day. What better way to experiment than to use the people nearest and dearest to you as guinea pigs? Surely they wouldn’t mind.

I picked up a turkey breast (with ribs and partial wing joints) for our test. At just under six pounds, it was perfect for our small test group. The turkey went into a brine for about four hours. Brine your bird, people! Trust me on this.

After its bath, the bird was rinsed well and patted dry. Since there was no cavity per se in this bird as the back was partially split, nothing got stuffed up its butt before it went into the oven. Some seasonings on the outside, and a rub of a spiced butter under the skin, and it was ready for its big show. Every so often I’d brush it with the remainder of the butter, which melted nicely sitting next to the stove.

In the meantime, my mom showed the boy how to make the stuffing. 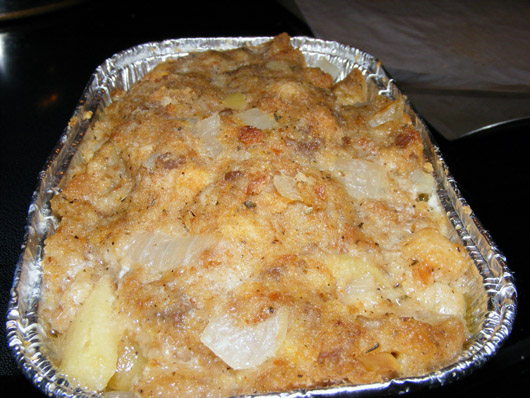 Of course, there was extra. This was ours to go with our trial run. The others: in the freezer, awaiting their turn.

What’s a roast turkey meal without mashed potatoes? No roasted garlic in these. Buttermilk, butter, and a splash of half and half. Hey, nobody said it was lowfat. 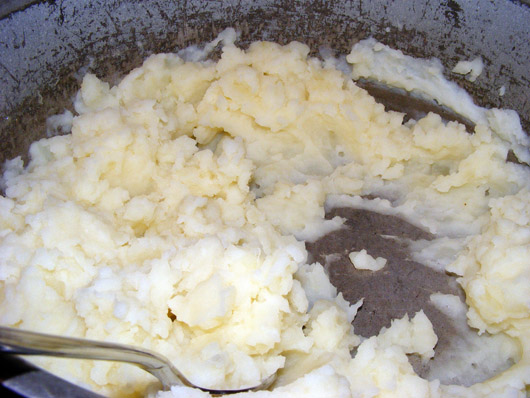 After a couple of hours in the heat, the turkey was ready for its closeup. 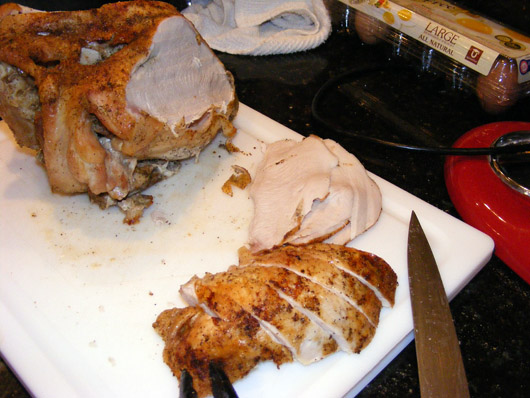 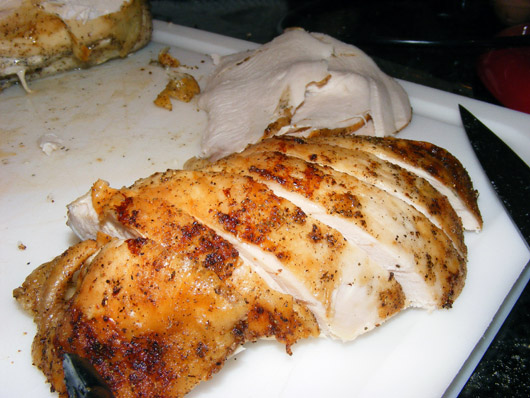 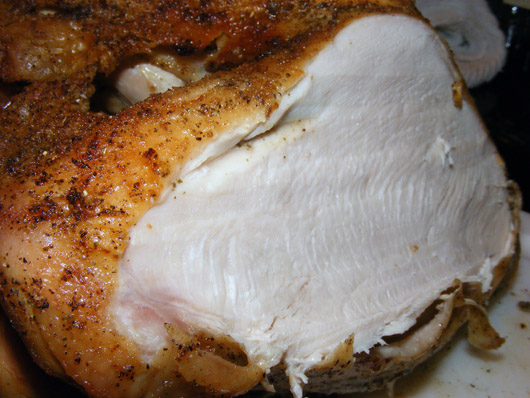 The drippings? Gravy, naturally. So many people have a hard time with gravy. Too thin. Too lumpy. Drain off most of the fat, leaving a tablespoon or two. Or three, if you want a lot of gravy. Sprinkle a couple of tablespoons throughout the pan, turn up the heat a little, and whisk together the fat and the flour. You’re looking for a soft paste consistency. If it clumps up all together, you have too much flour and not enough fat. Cook that for a couple of minutes, to get rid of the flour-y taste. Add your stock or broth. Homemade stock? Even better. Bring the heat to high and whisk away. One of the other mistakes people make is not bringing the heat up sufficiently under the gravy, so it never thickens. Your flour needs that heat, so let it rip. Just watch out for little volcanoes erupting and flinging lava-like gravy bits on your exposed skin. Ouch. 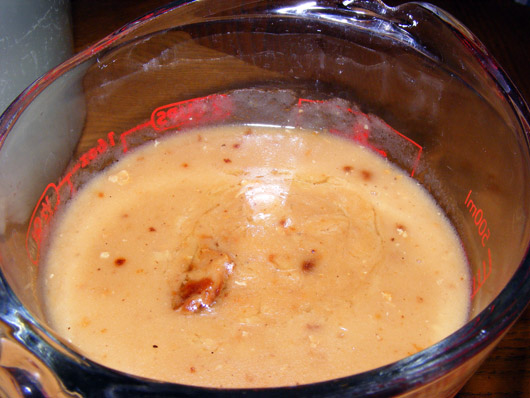 Then, put it all together. That cranberry compote you made? Don’t forget that. 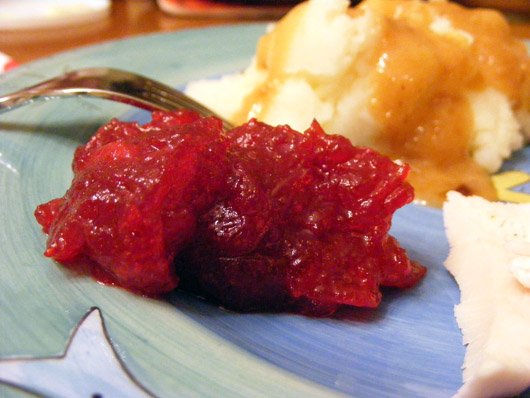 The other fruits of your labor. 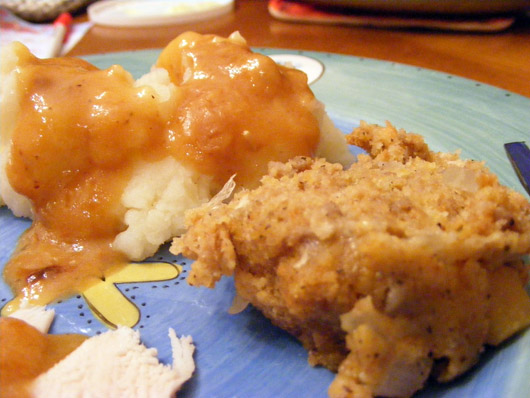 And then, it’s dinnertime. 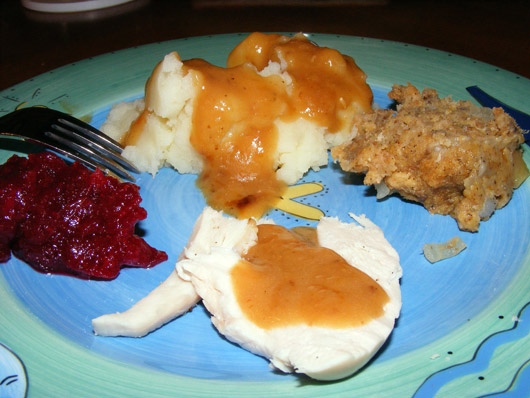 Especially when there are leftovers. 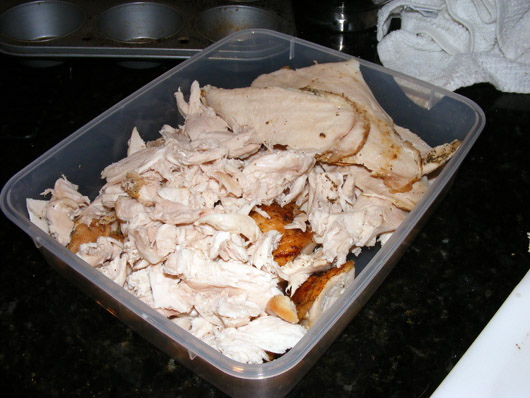 As part of our continuing series on “How I spent the weeks leading up to Thanksgiving”, we present: fresh cranberry compote in three easy steps. 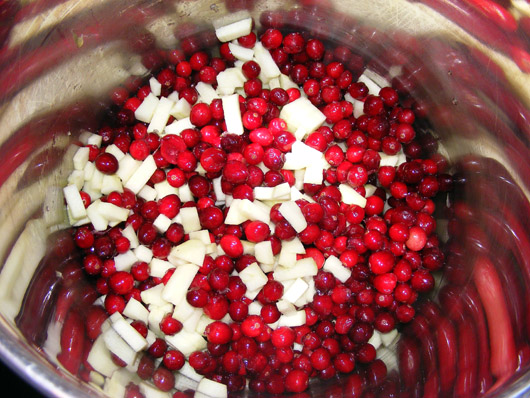 Step 2. Bring to a boil, then lower the heat and simmer until everything is nice and warm and the cranberries have (mostly) burst open. 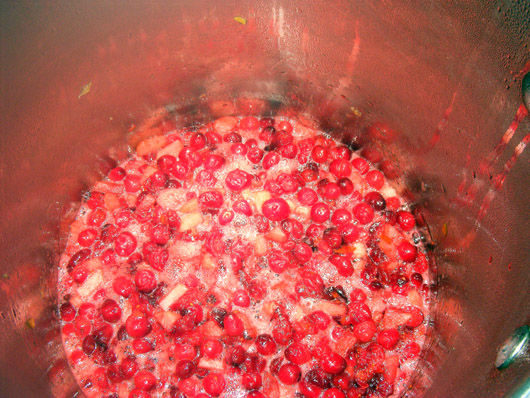 Step 3. Try to keep people from burning their lips and mouths on hot sugar and syrup when they are too impatient to let the compote cool a bit and insist on eating it right out of the steaming pot because geez, that smells good and when will it be ready, already? 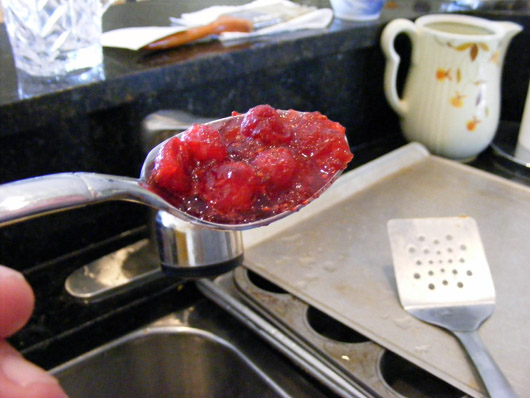