The garden in late summer. 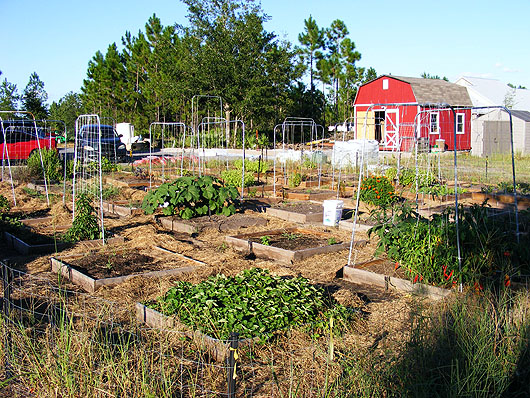 As you can tell, we’ve pulled most of the tomatoes. It wasn’t exactly as large a bumper crop as we expected. The problem? Bugs. Lots of them. Leaffooted bugs and stinkbugs, to be precise, sucking on the stems of the plants, weakening and slowly poisoning them. I had been squishing the bugs with my hands, but there were far too many of them and only one of me. So, we ceded the remainders to them. They got a lot of the tomatoes, all the squash and zucchini, and some of the peppers. Destructive little varmints.

And decided, after Fay gave us 20 inches of rain, to relocate the gardens to the front of the property while we worked over the winter to do something about the slope and drainage in the rear.

Given a rather severe case of both weeds/grass and mole crickets in the rear, a little prep was in order. 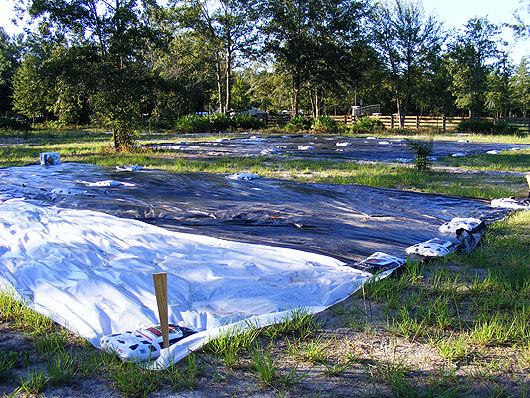 We blocked out the two areas with black plastic (and some clear, when we ran out) to do a bit of solarizing: kill the grass, any damn grasshoppers we managed to catch under it, and so on. I punched drainage holes in the plastic after about a week, and then the fun stuff began: moving the frames. 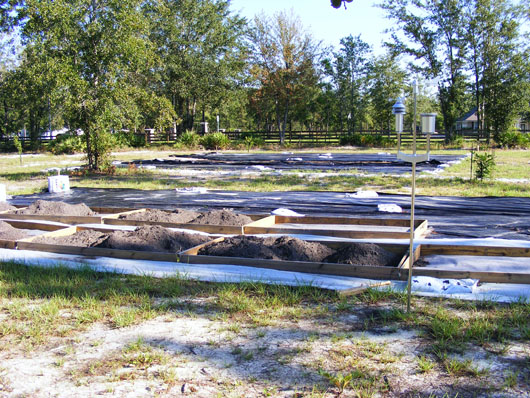 The silver pole and implements in front of the frames is the outdoor portion of my nifty new toy: a weather station.

The work to move the frames continues. Several of these frames – previously they held the back forty corn – have been smoothed, topped, and best of all, replanted.

Three varieties of the potatoes out back seem to have come through the overly wet weather brought by Fay without any problems, even though the water was three to four inches up the sides of the frames at one point – if they’d been directly in the ground, it would have been over. Still out back, and as you can see in the top photo, the paprika peppers were very productive. Another round of cowpeas (black eyed peas) is going out back while we work our way through the frames. Those are flowering, and will not have a long second sowing, most likely, because the temperatures are starting to drop – and if there’s one thing they seem to like, it’s the heat.

I’m going to experiment with growing tomatoes and peppers through the winter months with some framing and agribon to hold some heat in, since they are heat loving vegetables. We don’t have that many actual freeze days around here, and it would really be nice to have a homegrown tomato in, say, the middle of January rather than settling for those rocks at the grocery store.