I wound up with a puzzle today. 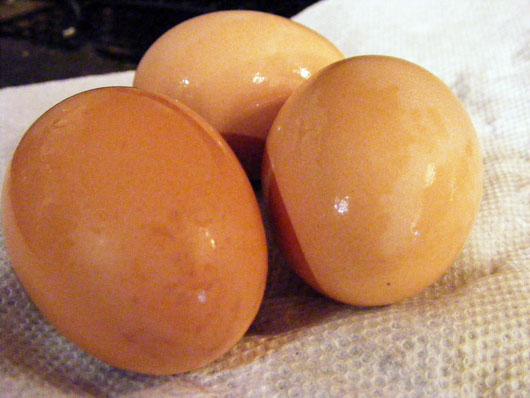 Now what, you ask, is so puzzling? These are eggs. There are three of them. Big deal.

Let’s back up for a moment, to last night. Yours truly, in the midst of working as usual, completely forgot to lock up the chickens. Until about 2 in the morning, when I woke up and remembered that I hadn’t locked up the girls – two now, as the third literally flew the coop last week and either got herself run over by a car or eaten. But they’re good about going into their house, and I figured by then either something would have gotten them or they’d still be alive when the sun came up.

Sun came up, and they were still alive. Victory! And an egg. I dutifully collected it, marked it with the date, and put it in the fridge.

This evening, I did remember to go lock them up for the night. And what did I find? Not one egg, as I expected. Three.

Unfortunately, the girls aren’t talking (in our language, anyway), so there is no telling what the real story is here. But I know that all four eggs will be treated with the utmost suspicion when we reach that date in our consumption (currently the oldest eggs in the fridge are from 10/1).