I am officially giving up trying to figure out why people have to be douchebags. Not just that, actually: why they have to be lying douchebags, about things that are so easily checked that it would be laughable if it were not so insulting. For instance: don’t try to tell me that you get “thousands” of pieces of spam a day that you then have to clean from your mailbox. We can check the logs, you know. We can see exactly what has been delivered and exactly what is sitting in that mailbox and exactly the time that mailbox was last checked. We know you receive maybe – maybe – 30 pieces of mail a day, almost all of which is spam and which we can see is deleted by the scanner, with the other three to six pieces of mail delivering because they are not, in fact, spam. Don’t try to tell me that you’re missing our billing invoices because of this supposed spam problem you’re having here when the billing address is at another provider entirely – can’t you see the failure of logic in just suggesting that? And don’t tell me the responses you’ve received to the very, very infrequent tickets you’ve opened have been short with just a “sorry – server’s busy” answer. We can look at the tickets you’ve opened and see that there’s nothing of the sort in them, and there are some very lengthy responses from us with quite a bit of detail about various things in there, almost nothing of which is related to this supposed horrendous spam problem you have. Beyond that, you haven’t opened a ticket since February of last year. One would think that for such an issue of such importance would have resulted in a ticket or ten in the span of a year. And finally, don’t try to keep changing your claims on subsequent emails, to things even more absurd. It won’t make you look any less foolish. Nor will informing us after three rounds of long emails that you’re not going to “waste” your valuable time doing our job – which, by the way, we haven’t asked you to do.

And that was my tipping point today. Yet another asshat who apparently knows more about running servers and networks than we ever will, lecturing me about a massive and entirely nonexistent spam problem. So for them, I say: fuck it. I will reserve my caring for the people who don’t pretend to know more than they actually know and/or who genuinely need assistance with something. Like the guy who needs help resetting his email client to pick up his mail because he managed to delete it somehow and the woman whose forum was attacked by porno spammers. For those occasions – rare though they are – when assholes like the lecturer appear, bitching for no reason whatsoever, they’ll get an answer to whatever the actual issue is (if there is one), and we’ll move on without even bothering with the nonsense they’re spewing. There’s gardening to be done. Menus to be planned. And there are these guys. 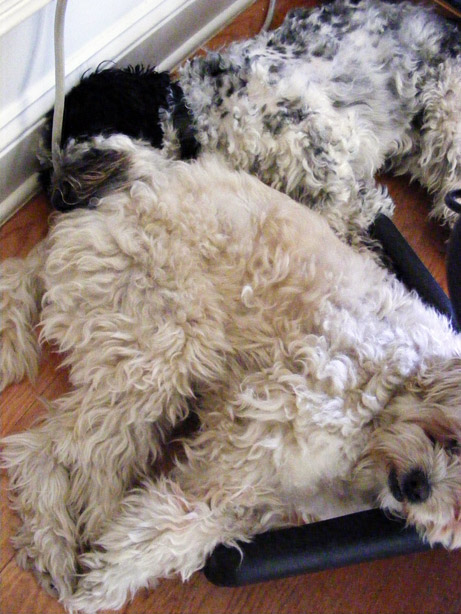 All of which is much more enjoyable (helping people who need it is really my downfall, gardening brings good things to the table, food keeps people filled, and the animals are darned cute) and much less stressful (well, maybe beyond picking and squishing hornworms, which can be rather icky) than exerting any energy on miserable people.

Tonight begins what will hopefully be the last cold snap for us. I’m also hopeful that the new round of peas and beans, getting a very nice start out there, will make it through (especially tomorrow, which is supposed to be around 20 or so, and then the crazy kicks back in by the weekend when it’s supposed to be 70 here). March is just around the corner, and March around here means time to plant corn. When even Mom is over the cold, cold weather, you know it’s time for spring.