Which of these is Subway’s sweet onion sauce and which is mine? 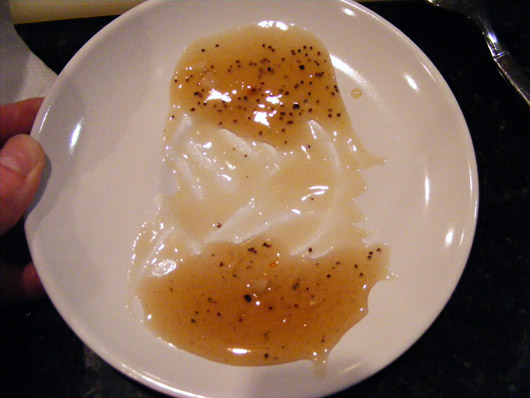 Hard to tell, right? That’s the point of recreating something you have a taste for in your home.

The three and a half days I spent with my gastro distress a couple of weeks ago also resulted in me not eating much of anything. At the end of that week, we sent The Boy out to get some food, and I had Subway’s sweet onion chicken teriyaki. Unlike the things I had eaten thoughout the week to try to get my system on track and without immediately losing whatever I ate, this stayed down. The next day, The Boy was out again, so I had him swing by and bring me another. That one, however, was not as good – the “sandwich artist” or whatever the hell they are calling themselves these days clearly did not graduate at the top of her class: too much mayo, sauce, and leaky tomatoes resulted in the thing disintegrating in my hand. So, being me, I decided I could make my own, sauce included. And I did. And it was mighty tasty – slightly sweeter than theirs, given the taste issues I have.

For the record: the top is theirs, the bottom is mine.

One thought on “Faking it”