The “official” spring is not here, but after another 90F+ day yesterday, I’m calling winter over. Mother Nature may kick me in the butt for doing so, but it’s time to once again tilt at my personal windmill: I’ll be planting the first round of corn at the ranch this week. We’ve been here since the middle of 2007, and didn’t really plant anything that year. Since then, here are the results for the corn:

2008: planted, but the native soil was too weak, since most of this area used to be pine forest. Poor germination, poor growth.

2009: incorporated manure and topsoil into a plot of the native soil. Better germination, still poor growth that stalled at about the one foot tall mark.

2010: no crops, thanks to another round of cancer to beat back.

2011: good germination, steady growth. Trampled by deer, as it was in an unfenced area.

2012: moved the sowing to raised beds. Zapped by multiple tropical  storms as it was beginning to tassel.

2013: sown again in raised beds. Good germination, good growth, tasseled out, fair pollination, some pushover from storms that caused a good number to lodge. Winter squash and beans sown with the corn (the “three sisters” method). Corn earworms got into a lot of the ears, and total harvest was half a dozen ears. No harvest of the beans or squash, as neither produced.

2014: sown again in raised beds. Good germination, growth, okay pollination. Winter squash sown underneath. Got sick during a visit from relatives, couldn’t keep a close eye on it, as the illness hung on and on for over a month. The corn survived most of the storms, but no harvest.

2015: will sow again in raised beds, but without any complementary planting. I intend to use some stakes and string to create a matrix for the corn to grow through, to try to keep it upright during our summer storms. Since corn is wind pollinated, and here, the wind is often fierce enough to blow the pollen away out of the plot, the plan is to help the pollination by hand. We don’t have a thousand acres of the stuff to capture all the pollen being blown around, which would just leave the perimeter planting as an issue if we did have that much  in the ground.  That means monitoring for the tassels being fully open and anthers to start forming. Once this happens, and I can see the pollen, I’ll start cutting the tassels and brushing them over the silks of the ears that will begin forming at about the same time the tassels are ready. Hopefully, this will be just the thing to get over the Sisyphean hill that has been corn planting at the ranch.

It rained today. Usually, in Florida during the summer, this is not exactly newsworthy. After all, for all the years, off and on, that I’ve lived in Florida, summers typically have the same forecast: partly cloudy, highs in the mid-90s, afternoon thunderstorms.

Then I moved out of the city and into this very strange, Bermuda Triangle-like plot of country only to find that if the forecast calls for anything under 50%, it can generally be ignored, because the rain will blow itself apart before it gets to us, or slide off to the north or south, leaving not a drop here. The other extreme, of course, is the tropical storms that come and hang out for a week, dumping two feet or more of water around the property. Most of the time, it’s the former rather than the latter.

Still, it rained today, this afternoon, which meant I hauled myself outside very quickly this morning and managed to get straw put down around the garlic – one variety of which is turning into a tremendous disappointment – as well as move almost 1300 pounds of dirt and poo. Keep in mind that here on the ranch, almost nothing is mechanized. That’s right: hauling this sort of stuff around is done by human power, not machine power. By the time I think a tractor is worth the investment, it won’t be necessary because all the work for which it was intended to be used will be done. While I’m sweating out the latest activity, I sometimes wonder if this is what it was like for the earliest settlers, although I have the benefit of being able to escape into more comfortable quarters for a break or before the rains come (after battening things down against the storm).

The good thing about the rain is that it makes the irrigation line running less of an issue. That’s good news for the silver queen corn, which currently occupies three frames of an incomplete six frame row. Even though I made good progress today on the remaining frames in that row, I can’t run the lines until they’re complete, and that means hand watering. Unless it rains. 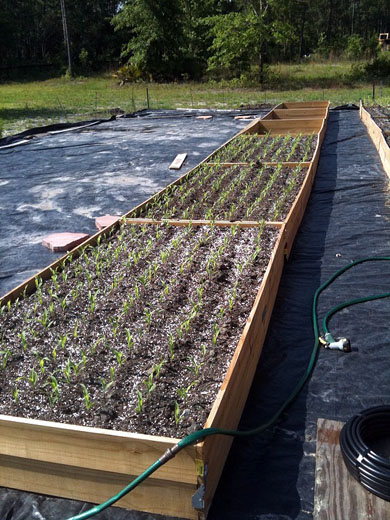 As with most of the rest of the planting, this was delayed by family issues. The vendor had stamped an 85% germination rate on the pack, so I overplanted the rows, planning for a less than optimal germination. As it stands, it looks to me more like 95%. I consider that a good thing, and I am ever hopeful that we may actually harvest corn this year instead of losing it to deer romping through it (not an issue now with the fencing) or to bizarre weather that flattens it to the point of nonrecovery or alternately drowns it/droughts it.

I also put in another variety as a test: Vision F1. 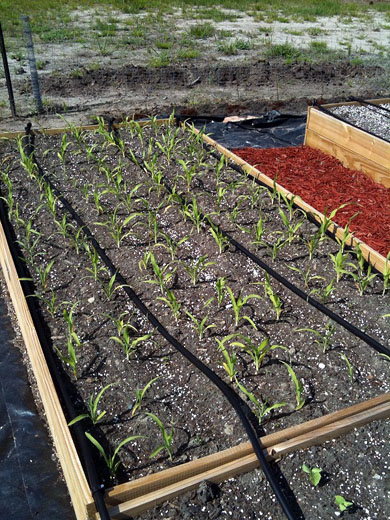 This planting went in earlier than the silver queen, and is a sugary yellow variety, slightly shorter on harvest time than silver queen. Corn really has turned out to be my personal windmill here on the ranch, a la Don Quixote, and it would be nice to see some through from seed to harvest.

My dental saga continues apace. I’ve had four teeth pulled recently, and it looks like another one is going to have to go: cracked down the middle of where the temporary build was done, awaiting a crown – ironically enough, the prep date was supposed to be this Friday – and the actual tooth part is loose in the socket. No sense capping something that is going to fall out or snap on its own, so it’s time to call the dentist to see if he can work me in for ten minutes to give me a thumbs up on the pull of that one, and I’m thinking we might as well pull the opposing tooth, also slated to be crowned. The oral surgeon will love me as much as the dentist by the time all is said and done. Radiation and chemo are hellish things. Eventually, I will probably end up with all my teeth pulled, which would mean dentures – and that means I have to really get going with the torture device meant to help stretch the scar tissue created by the treatments and assist with the trismus. The only problem with this is when I have one or more teeth that need attention: I need to use the device in order to help with dental treatment and try to hold on to my teeth, but it is quite difficult to use it when I have teeth that require attention. Yet another lingering gift from the big C.