We decided, earlier this year, to find a local (or semi-local) provider for a pasture raised turkey for our Thanksgiving meal. Fortunately for us, the same woman who provides, from time to time, our milk, and who provides eggs when we’re out also raised chickens for meat as well as turkeys. Did we want one or the other – or both?

A few Saturdays ago, we headed down to pick up the chickens. Silly me, I didn’t take my camera. I should have, to capture the process, and I didn’t make that mistake when we went to pick up the turkey. 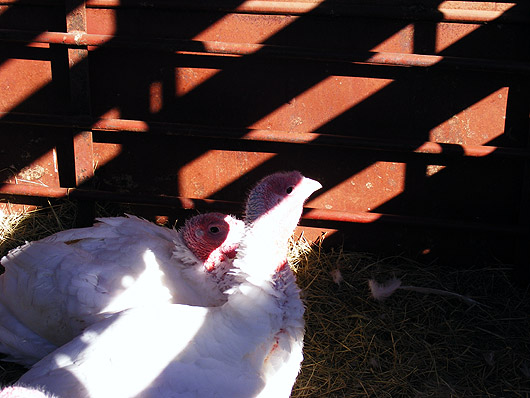 The folks at the farm were slaughtering about 35 turkeys that day, including those fellows there. If you’re squeamish, or you think the food you eat just comes naturally wrapped up in plastic at the store, you should probably skip the rest.

The processing for the turkeys was about the same as the processing of the chickens we’d witnessed a couple weeks earlier. They chickens were taken four at a time, and the turkeys two at a time – the latter, of course, being larger and involved a bit more in the way of control. 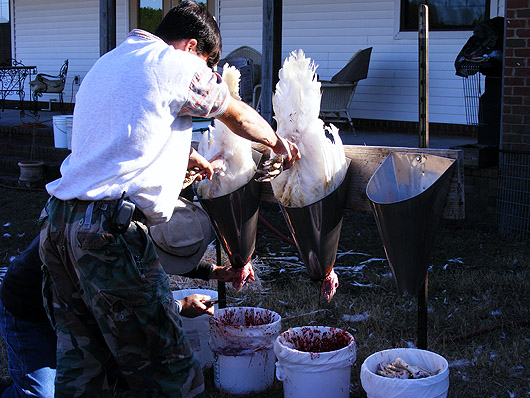 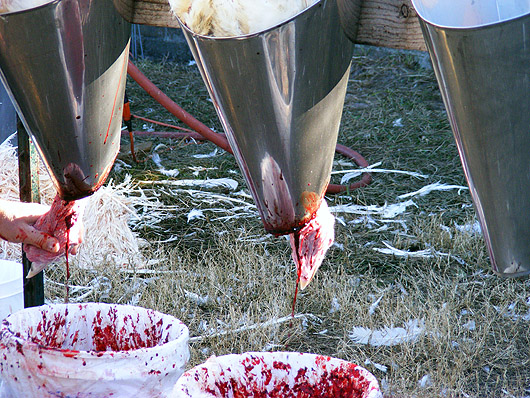 The turkeys, like the chickens, were allowed to bleed out into the buckets. We learned that this, like the feathers and the innards, is composted – buried with hay over it, to keep the animals out.

Once the turkeys were dead, Tom pulled out the largest tail feathers, and then put into the scalder. While the chickens had been done in groups of three, the turkeys, larger, were done one at a time. 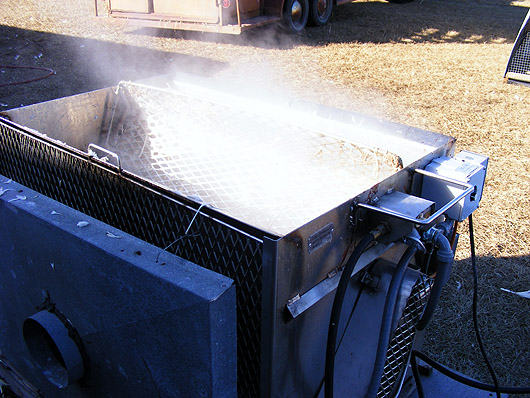 After a spin in the spa, it was off to the plucker. I’ve seen these on blogs from time to time, and up close it really does look like a washtub with rubber fingers. The chickens had gone in to the plucker in batches, to create more friction as they spun around. The turkeys went in alone. 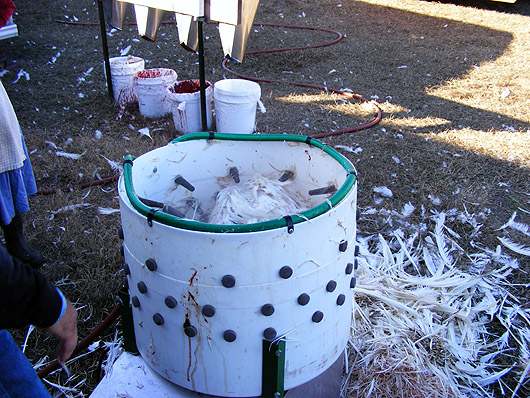 Once out, the turkey went to the table for dressing. 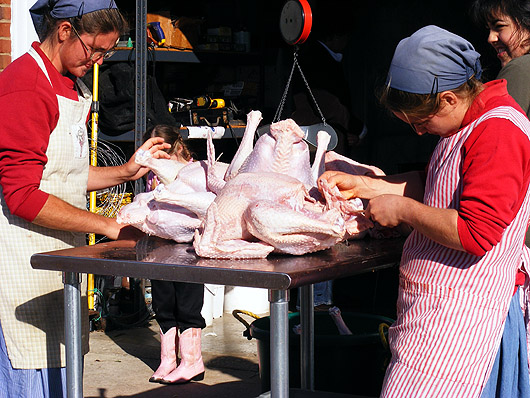 The girls had buckets for the innards and basins for the gizzards and necks.

Our turkey weighed in at about 21 pounds. As I looked down the sheet they were keeping, I noticed that the turkeys were averaging about 18 pounds from the birds that had been processed thus far.

On our chicken run, we had picked up ten chickens, averaging about six pounds or so per bird. Then, as now, the bird went from live in the pen to home in the span of two hours, including travel time.

That turkey was the tastiest we’d ever had – some of the folks at dinner said the same thing. We only ordered one this year, but next year, I think two are in order: one for Thanksgiving dinner, one for Christmas dinner. Especially now that we know exactly how they’ve been raised, how they’ve been treated, and how they’re slaughtered, there’s no particular reason not to order more next time.

A thin slice of one, with Venus and Jupiter thrown in for good measure, that is. 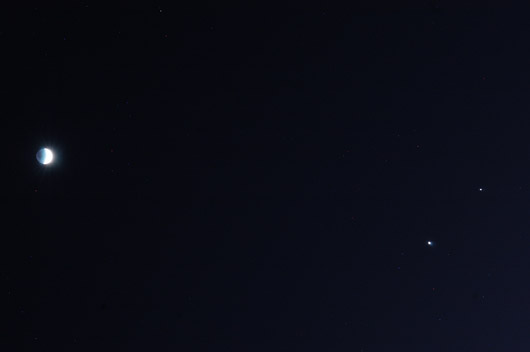 Been busy around here, what with the election (babysitting the servers and network), regular work (the usual), the holiday (Thanksgiving done and moving onto Christmas), and the homestead (the first couple of freezes, with another due right now and all the other things that need to be done).

We had a fantastic free-range, organic turkey for Thanksgiving dinner. Came from a farm not too far from here, and went from live, walking around to chilling in the fridge in the span of a couple of hours, including drive time. Pics of the slaughtering process, for those interested – I’ll be sure to post those below the jump in the next post.