Why must people be so freaking rude? Let’s assume some things here: let’s assume you’ve been a client for quite some time, that you know how we operate, that every single issue you’ve ever raised has been addressed, and that we’ve gone outside the normal bounds of technical support to assist you. Let’s assume that I am up at 4AM because our monitoring has picked up some issue on your server, and that I go about trying to repair that problem instead of answering one of the five tickets you open, because I am not in a position to update those, and anyway, getting the problem solved is my highest priority. Do you a) say thanks and go away, problem solved; b) say thanks, ask for more details than those provided in the first ticket you opened after the problem was solved; or c) tell me it is “unacceptable” that you have to take the helpdesk’s autoresponse as an indicator that something is being done, despite the fact that you have been around for awhile and realize this means we have received the ticket and are likely already working on it before you even noticed there was a problem? If you answered (c), then you have managed to match the asinine retort we received, before we received a further retort that we were sarcastic and rude.

Good luck finding a host with proactive monitoring who will immediately bounce out at 4AM to fix your server, who owns their equipment rather than leasing it through some third party (meaning no waiting on relays of information, and so forth, cutting out the middle part of all that), and who will go outside the realm of what is normal technical support as we have done in the past, without charging you a dime for it.

Life is much, much too short to be dealing with people intent on being unhappy because Shit Happens. I am well aware – more aware than some others, at this point – that Shit does in fact Happen. You don’t see me being an ass to people around me because I’ve been affected by some random problem happening on a server.

Calzone for dinner, on the last of the pizza dough batch I made earlier this month. No mushrooms (Shit Happens!), but just as tasty with sauce, onions, pepperoni, mozzarella, and three year aged cheddar. It was probably larger than usual, and I ate almost the entire thing, which has now made me feel stuffed, but that’s nothing a good cappuccino can’t solve. Or at least help.

Made a double batch of dough earlier today, to tide me over until we’re in post-surgery and into recovery time around here. I hope so, anyway.

I am certain that my half dozen faithful readers are wondering what cliff I fell off, given my complete lack of maintenance here on ye olde blog front. What, they ask, is she doing? Lolling around, eating bonbons, instead of planting things, cooking goodies, and the like?

I’m not much on bonbons. At least for myself, not these days.

No, dear readers, yours truly has actually been doing things like whipping up batches of pizza dough for the freezer, babying plants along and harvesting goodies (six pounds of cukes the other day!), making bread and butter pickles and foisting them off on anyone within arm’s reach, cooking up some homemade french onion soup (delicious!), and pulling weeds (a losing battle).

But I’ve also been undergoing yet another round of tests, from an x-ray to a CAT scan to a PET scan to a biopsy, and on the 6th your intermittent blogger will be back in the hospital, this time to remove a wedge of lung that has a suspicious lesion on it, along with a lymph node hanging out near the trachea that also looks suspicious. None of this is good news other than the fact that a) it’s very small, and b) it’s very early, so given my overall good health, my total lack of smoking, ever (which makes it all the more ironic this second time around, having some crap I absolutely should not have),  and my relatively young age, should be not as big a deal as it would be were I a two pack a day puffer with cardiac issues and high blood pressure.

Still, it’s no fun, and I’ve had enough of medical stuff these past five years to last me a lifetime – in fact, it seems like I’m making up for a lifetime of not a whole lot of medical anything, doesn’t it? And still, the same people ask the same question over and over again: smoker? The only thing I smoke is bbq on my Bradley, thanks. They’re always surprised, and I suppose given their professions, they should be, since it still surprises the hell out of us here that me, of all the people in this family, should be receiving these diagnoses. On the plus side, I’m probably the healthiest person in the family, so my odds are a lot better for recovery than most everyone else’s.

The doctor says a 4-7 day stay in the hospital (let’s aim for four here), and then six weeks for recovery (too long for me), which will put us at the beginning of planning stages for the fall garden. Once again, it seems another prime season has been lost in some fashion, this year from a late start due to an extended illness and death in the family a few months ago, and now an interruption in the height of the season due to surgery and recovery. One of these days, we will have all the pieces together for an actual, planned, well-begun, well-managed season.

The tomatoes are soldiering along as well as they can, although the heirloom Cherokee Purples went down to blight due to an extraordinary run of rain we had. The paprikas, the stars of last year’s garden, and the bell peppers are both a major source of disappointment this year, as neither are producing. The latter is especially discouraging, as I wanted to stash plenty of roasted red peppers in the freezer for those times when I want to make soup. On the plus side, as we’ve been going through all this testing/scanning nonsense, I did get some more flats started, and put in (I think) about 36 starts of a bell pepper called Fat N Sassy. If there is a more appropriate name for a pepper that should be perfect for roasting, I don’t know what it is. On the downside, these will be ready to go out into the garden proper in the next couple of weeks, and I’ll be directing traffic instead of participating fully, what with all the mother hens hovering.

The peanuts are going gangbusters, and we’ve already enjoyed zucchini, green beans, filet beans, and okra from the garden, along with the aforementioned cukes. I have kidney beans, another round of green beans, and limas popping up out of the soil – once again, score one for getting these things in before surgery time!

This coming week I”ll be working like an over-caffeinated squirrel trying to get things in order before I go down for the count. The upside is that I’ll have time, sitting around on my ass, to post some of the pictures that I’ve been taking here and there. One thing I will say is that french onion soup, delicious though it is when homemade, is not very photogenic. It surely was tasty, though.

If you were not here for the big bash, you not only missed the pleasure of my company – what’s not to love about the cook, after all? – but you also missed out on on a good time and all of this. 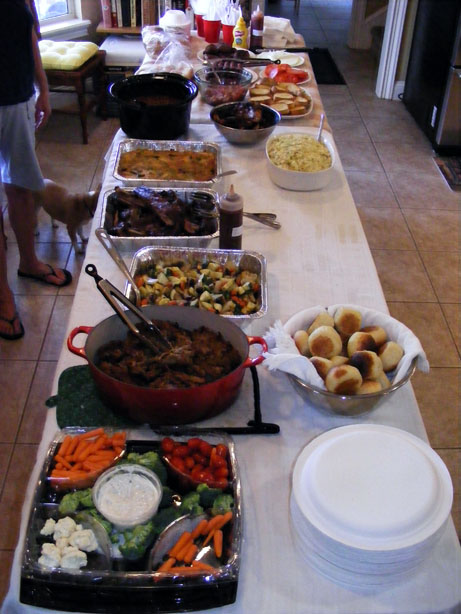 Would you like a closer look? Of course you would! 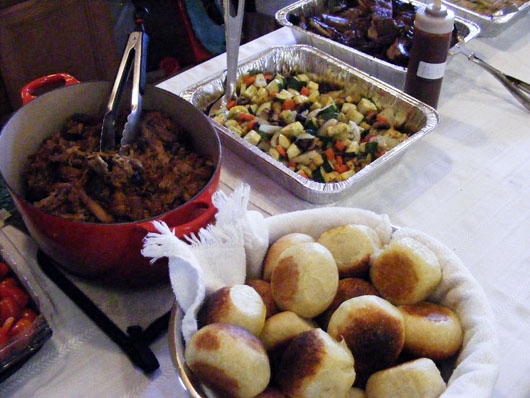 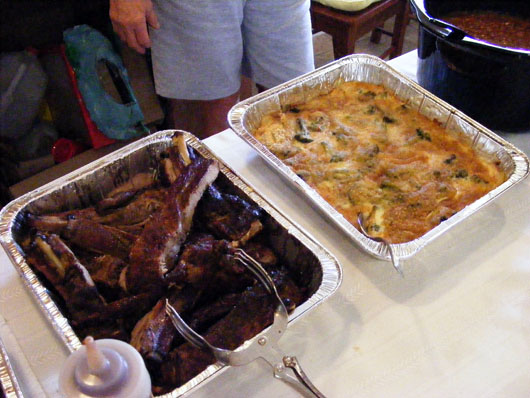 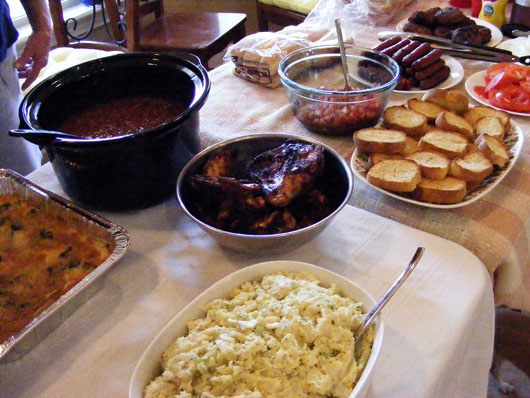 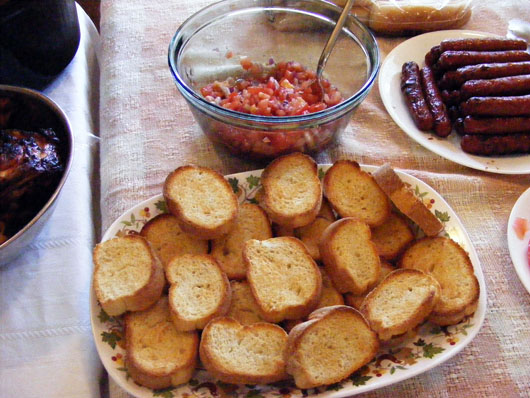 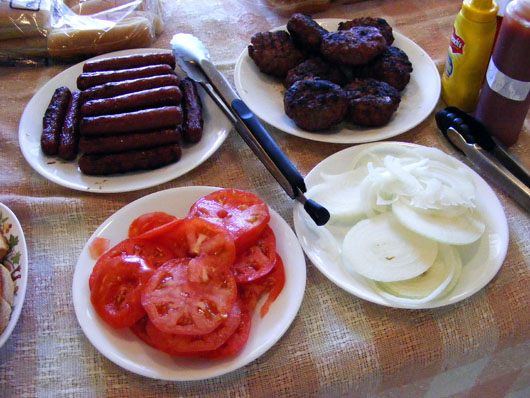 If you’d been here, you could have had yourself a sampler platter, much like this one.

Not shown, because it disappeared much too quickly: homemade strawberry ice cream and homemade peach ice cream, along with both bananas foster and a batch of toffee chip cookies I whipped up at the end of the evening.

If you were here: thanks for joining us. If you weren’t: perhaps next time.

But not in a bad way. Allow me to explain.

Over the Memorial Day weekend, we held a bash that (quite naturally) included a great deal of food. More on that later. A portion of that was some fish we had been keeping aside for some pescatarian friends of the family, ready to stuff with herbs and toss on the grill. They didn’t make it, so we had some nice, fresh trout awaiting something to do with themselves. Or to have something done to them before they went over the edge.

After removing the heads and cutting the filets, then searing them very quickly, we had this.

It was fantastic: the fish was flaky, lightly seasoned, and the buerre blanc was smooth and silky, with the tang of the lemon juice feeding through enough to give the flavor, but not so much as to overwhelm everything else. What more could you ask than to have empty plates at the end of the meal?