It’s funny how things sneak up you. For instance, for the past week I’ve been noticing a strange thing about the cucumbers, and have found more than a few tiny cukes withering on the vine, pale yellow and sickly when they had been a vibrant green when they had appeared as the first non-pea, non-bean items in the garden. The peas and beans don’t seem to care about anything that’s going on, pumping out fruits as fast as we can pick them.

The cukes, on the other hand, after a slowish start, have begun to take over, climbing up the trellises, into the cabbages and the microsprinklers, attempting to strangle both, reaching over a three foot gap to attach to yet another cucumber, and then both heading over another three foot gap to the garden fence itself.

Still, I fretted over the baby cukes. The people who come in and out of this house like fresh cukes plain, in a sour cream and dill sauce, as pickles, in salads, and so on. It simply would not do to have a bunch of wimpy cucumber plants refusing to yield to the mammals at the top of the food chain. Today, while feeding the corn some tasy (stinky) high nitrogen, all natural food, I worked my way over toward the cukes and started pulling up more grass (thanks, neighbor, for having your yard guy heavily overseed on some of the windiest days ever!). And discovered what I’d missed while looking a bit too closely at the tiny, failing cukes instead of looking at the larger picture and writing off those tiny failures as test balloons, of a sort. 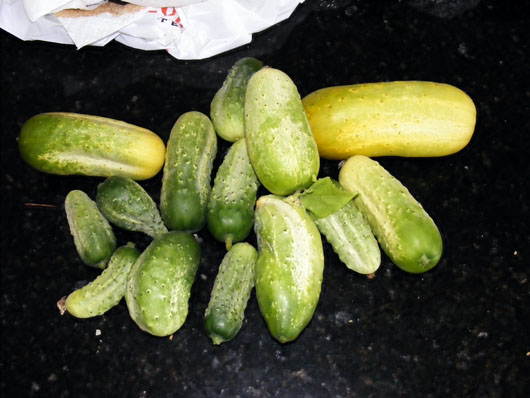 The city, like many other cities, is in a perpetual state of construction somewhere. Whether it’s some kind of what appears to be a drainage project visible off the highway, the newest commercial property built to hold who knows what merchants, or the newest elementary and high schools being built right on top of one another, one thing is constant:  large, beautiful piles of deep, dark, rich topsoil on the job site. If you’ve never had to deal with dead, sterile, no-good-bug, clay soil on top of hardpan, then you’ve probably never felt that pang of envy that this primo dirt is being pushed around in a place where most people will not appreciate it for what it really is at its heart: a great base for growing things other than concrete structures.

But if you’re like me, stuck with clay down a foot, followed by hardpan, with little in the way of beneficial insects, pocket gophers that seem as impervious to tunneling through that clay as the clay is impervious to allowing anything to grow, you daydream when you see those lovely piles of dirt sitting there, and think about how it would be to just back up a truck and haul some away during the dead of night. Instead, you have a few loads brought in by dump truck, have the tractor guy spread it around, and then bring in some poo. And spread that around. By hand. Because the ranch has no tractor of its own. Yet.

Luckily, exercise builds character. Or so I’ve been told. 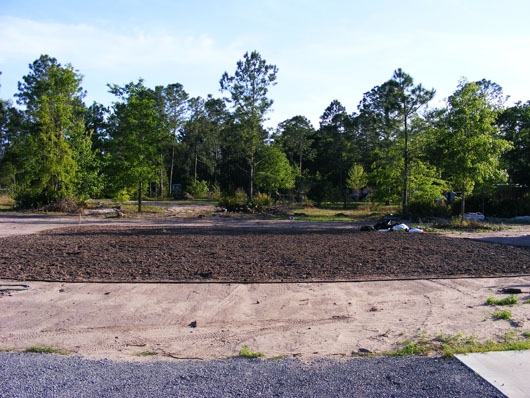 Behold my field of poo. Cow poo, to be precise, lovingly spread by hand (in, I might add, a very nice and even geometric dispersion) while I was cursing the homebuilders for scraping off every inch of viable topsoil and selling it off when they began this job. This was followed by a truck of horse poo, kindly provided by someone with whom we have a sort of symbiotic relationship: she has horses that quite naturally provide poo, and we are willing to haul it away from her place so she does not have to figure out what the hell to do with the amount of poo that large creatures like horses create. 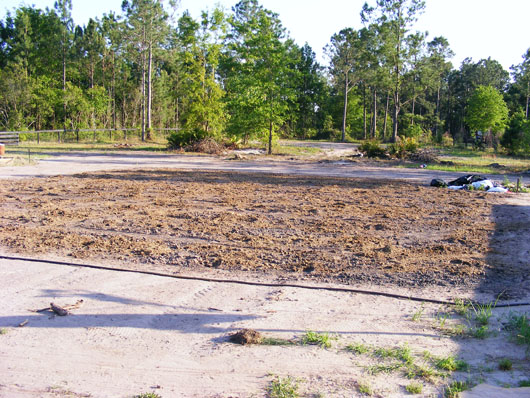 Why this work? Erosion, for one. Keeping what little sand and dirt that is on top of the clay in place is important, as the wind is very rarely not blowing across the property. Saving the soil will keep it where it belongs – on the ground, not blowing off into someone else’s place or into the house. Another reason is that I’d really like to have the kind of ground that is workable enough to plant crops directly in the ground, rather than having to build acres and acres of frames. Plus, it’s simply the ecological thing to do: good soil means good habitat means good critters and insects means a healthier environment in my little corner of the planet.

This first poo field is just about 50 feet by 50 feet. The far right hand corner is actually a compost pile that we’d solarized with black plastic during the colder months and uncovered a couple of months ago. I had thought I’d turn it a couple of times, then dump it into the field to be tilled in with the poo (yes, I’m tilling, and there’s a reason for that) but we discovered volunteer potatoes, tomatoes, and possibly a squash or two growing up out of what is no doubt some very nice compost. So it stays, for now.

I’ve seen blanket statements here and there about how tilling is bad, should never be used, and how anyone who tills up a field or area is just a plain Bad Person. Like most generalizations, this one simply does not cover every situation. The soil, such as it is, is like cement – fitting, if you recall that the early peoples made brick from this and other types of clay, either with or with other binding agents (like straw, for instance). Imagine touching an adobe building and feeling the strength of the sun dried brick, and you’ll have the general idea about the hardness of what’s been left in place here. Even tilling is an ordeal, and has to be done multiple times in the same area, in order to get further down than a quarter inch. On top of all this, I threw down some soil building mix (soybean, oats, clover, alfalfa) to grow and then till right back in. Green manure to add to the brown poo.

The poo field has since been fenced (deer, dogs, cats, gophers) and the first two rows created as raised rows about ten inches wide. After making those raised rows, though, I thought of something: large farms don’t do this, or if they do, it’s with machinery. So, while I test actually trying to grow anything in the field, I figure another test is probably in order. Those two raised rows will be the only ones in the field. Everything else will be grown at level. We’ll see how it all works out.