Sunday was our last day in Savannah. Saturday night, after a day of touring, walking, and eating, the girls went right to sleep when we reached the hotel. I stayed up a bit later, as I was too restless to sleep. Eventually, I managed to go to sleep myself, only to be awakened between 5 and 6 AM by a couple of servers needing attention. Those issues addressed, I debated staying up until the girls awoke, but I was freezing in the artic air my mom insisted should be the norm, and crawled back into bed and pulled the covers up over my ears.

END_OF_DOCUMENT_TOKEN_TO_BE_REPLACED

We had some time on our hands between the end of the Paula Deen tour and our reservations at The Lady and Sons. There were a couple of things we wanted to see: the Colonial Cemetery, the Cathedral of St. John the Baptist, and the Mercer House (also known as the Mercer-Williams House). All of these places are at the southern end of the historic district, so, with our comfy shoes on, water in hand, we started walking.

As we walked, I snapped some photos of a few buildings along the route. The architecture of these buildings is amazing to me, as is the fact that many of them are relatively unchanged, structurally, from their original designs.

END_OF_DOCUMENT_TOKEN_TO_BE_REPLACED

A note about Saturday’s Interlude: this entry deals specifically with the Paula Deen tour and our dinner that same night at The Lady and Sons restaurant. Part two deals with our activities between the end of the tour in the morning and dinner that evening.

Saturday dawned bright, clear, and hot, as summer mornings are wont to do in the South. While the girls went downstairs to grab some coffee and tea, I stayed upstairs and poured some formula down the tube. I had no idea when we would be eating, or if I would be able to eat any of it, and the heat takes its toll on you when you’re out and about. I finished that, redid the dressing around my tube, and went downstairs to join the girls and await the bus or trolley that was to pick us up for the tour. 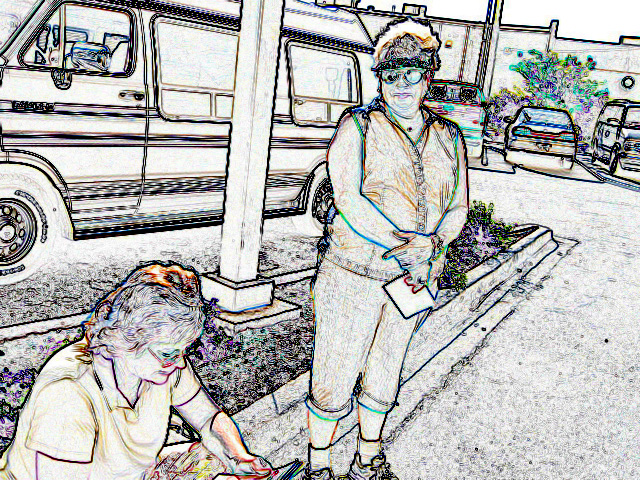 END_OF_DOCUMENT_TOKEN_TO_BE_REPLACED

We interrupt this Challenge to bring you a travel interlude. Warning: this entry and those that follow are image-intensive and long.

It has been three years since I’ve been to Savannah, GA. Coincidentally, it’s been three years since I had a real break of any sort from the day to day operations of the business. I don’t count the cancer diagnosis and treatment as a “real” break, as it was anything but relaxing and enjoyable. Unlike, for instance, my most recent trip to Savannah, in the company of my mom and one of my aunts.

Why Savannah? Well, there are several reasons, really. My aunt really, really wanted to go take “The Paula Deen Tour”. Yes, there really is such a thing. My mom agreed that it would be fun, and I just love Savannah. We decided awhile ago that we would take ourselves on up there, as we say here in the South.

And so we did.

END_OF_DOCUMENT_TOKEN_TO_BE_REPLACED

There used to be a little Chinese restaurant down the road from here. It was in a rather unfortunate location, with bad access unless you were heading the right way on the street. The building sits back a bit from the main road, is not very large, and is there alone, with no supporting characters to help it along. Every time we would drive past the place, it was deserted.

Now, however, the parking lot is busy during the day and packed in the evening. The place is no longer serving up Chinese food, though. It has been converted to a Latin-inspired place called La Puerta Plata (The Silver Door). We decided to stop off there and pick up some food to see how it was – and if it justified the traffic the place seems to get.

The menu is not very large, but has enough of a selection that I wouldn’t walk out immediately were I there to eat. The menu is in Spanish with some English translations, although some of those translations leave a little room for improvement – simply translating something as “meat” for instance, is not helpful to someone who does not speak Spanish, like my mother. I walked my mother through the menu, from the stew (with chicken, beef, plantains, and potatoes) to bistec y cebolla (steak and onion). She wasn’t very interested in the stew made with goat or the seafood items, which consisted mostly of shrimp (or shrimps, as the menu said, translating literally from camarones). We settled on the steak and onions and an order of chuletas (pork chops), with an order of stew. The entrees come with a choice of white or yellow rice, red or black beans, and salad, or plantains and salad. We opted for the salads and one of each of the rice and beans.

The food is not spectacular, but is serviceable. The steak was a bit overdone, and the chops uninspiring, although my mom perked those up a bit with a little of one of the hot sauces that I have (Blind Betty’s Pineapple Pizzazz). Both the rice and beans was standard fare, not bad, but not great. Since I couldn’t actually taste the other food, I did have a small taste of the broth of the stew. It had a curious undertone to it, most likely the result of so many ingredients and seasonings in it. It didn’t help that it was more soup-like thatn stew-like – Rachael Ray would probably term it a “stoup”, halfway between a soup and a stew.

Overall? The place most likely will not be given another chance by the family, but I’ll probably try something when I can eat again, just to make sure they’re given a fair shot.