We had some time on our hands between the end of the Paula Deen tour and our reservations at The Lady and Sons. There were a couple of things we wanted to see: the Colonial Cemetery, the Cathedral of St. John the Baptist, and the Mercer House (also known as the Mercer-Williams House). All of these places are at the southern end of the historic district, so, with our comfy shoes on, water in hand, we started walking.

As we walked, I snapped some photos of a few buildings along the route. The architecture of these buildings is amazing to me, as is the fact that many of them are relatively unchanged, structurally, from their original designs. 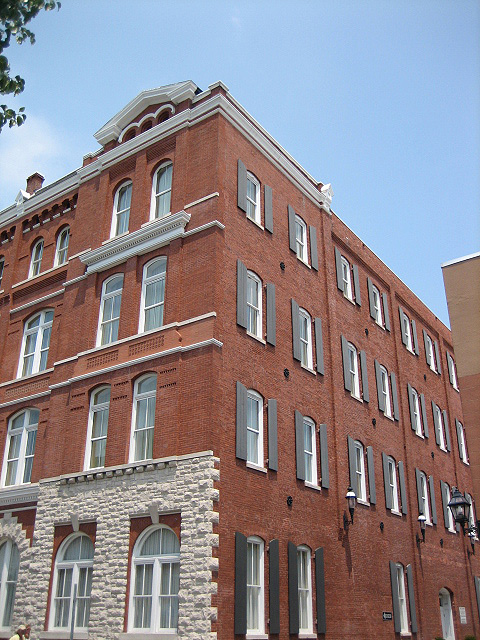 We walked several blocks to the east along Broughton. 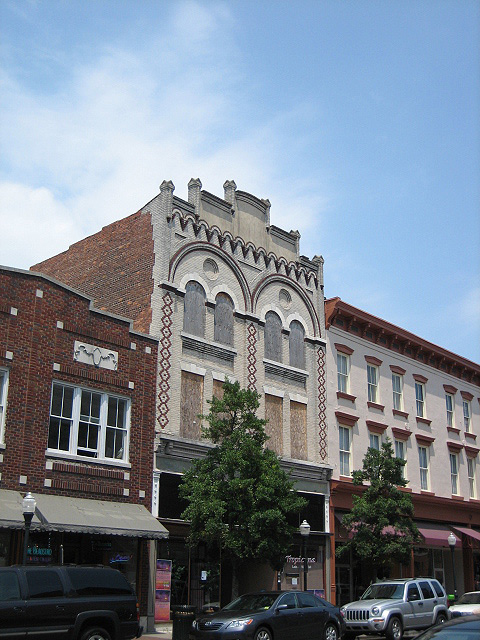 Quite a lot of people were out and about. It was, after all, a fine Saturday afternoon in a tourist kind of town. 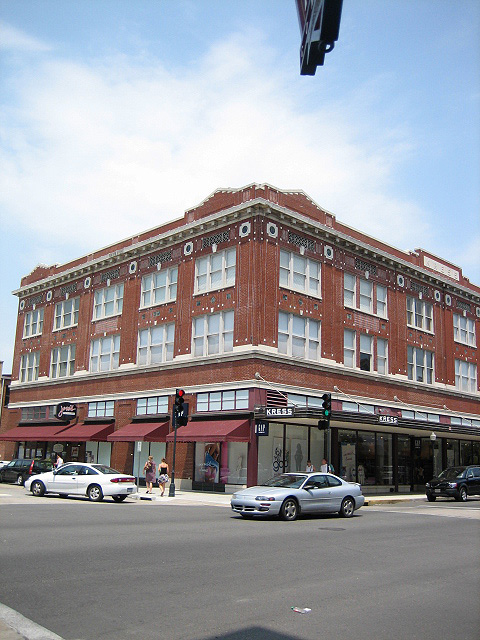 The building above is the Kress building. The Kress family was known for their five and dime stores, akin to the old Woolworth stores. Their buildings were also known for their distinct architectural style. This particular building has been converted, like many others, into a mixed commercial and residential facility, with retail shops below, and lofts available on the second floor. 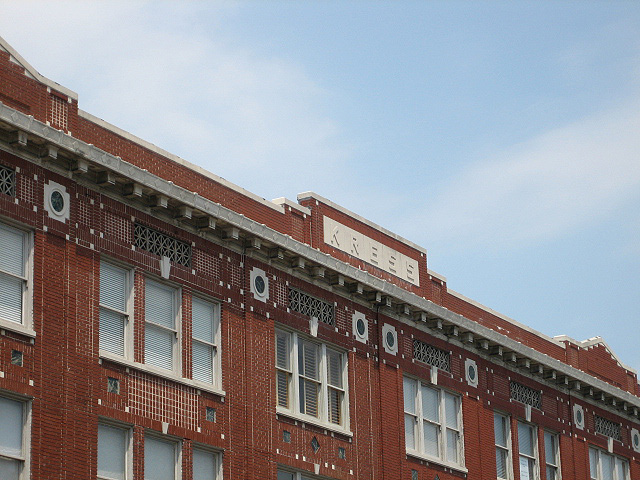 Very few of the houses in the historic district are in terrible disrepair. Most have been restored and kept up nicely, and some are a bit more colorful than others. 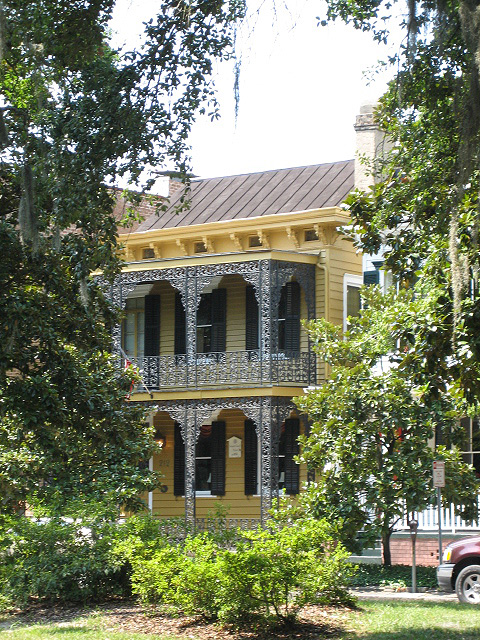 We turned down Abercorn and started making our way south to the cemetery. 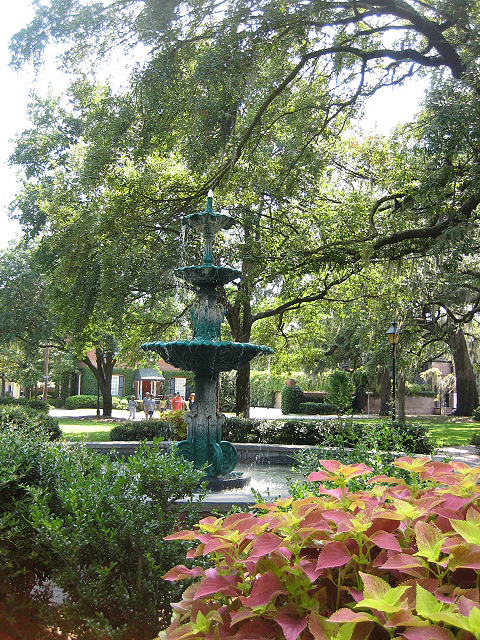 The arch to the grounds. 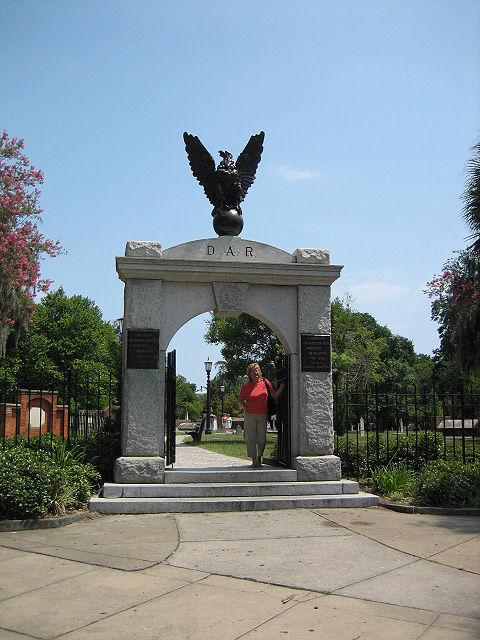 The cemetery is deathly quiet. It was also quite hot, as you might imagine. The dead didn’t appear to mind all that much. 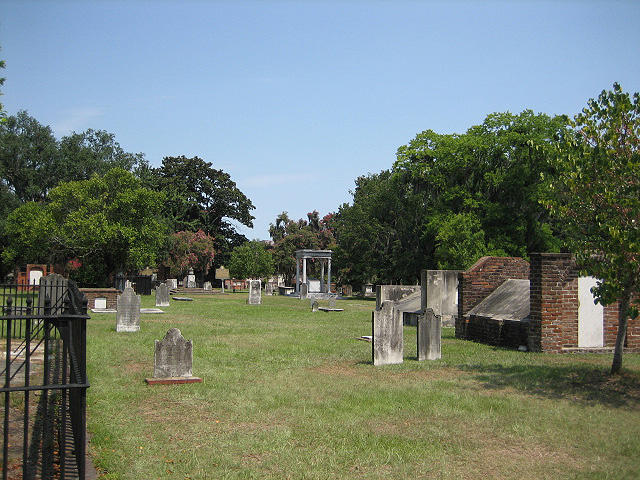 I sought out some shade for a bit of a rest, and spent a little quality time with someone whose tombstone had unfortunately eroded to the point where it was unreadable. 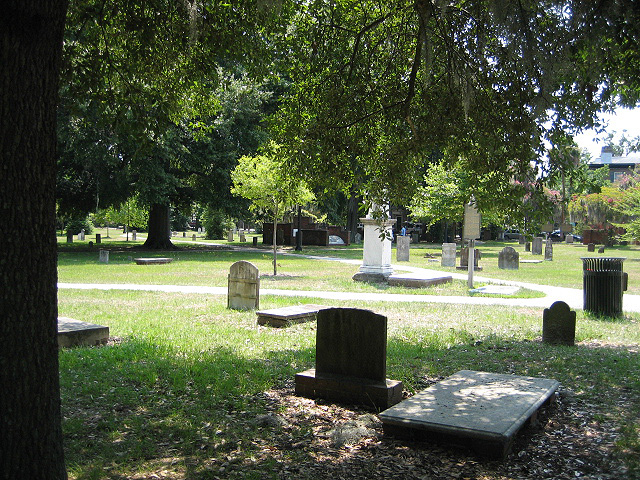 We pushed on to the cathedral. When we’d passed it earlier during the tour, the red sign was out: this means there is a function or service going on, and tourists are asked to refrain from entering for a look and photos. By the time we reached the cathedral in the afternoon, the wedding that had taken place was long over, and we entered freely into the cool air. 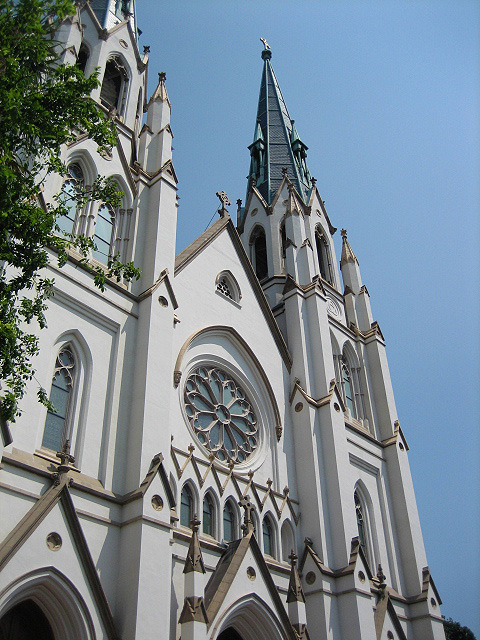 The gentlemen in the door were part of the wedding party. One is holding a clear plastic box with a wedding dress within it. 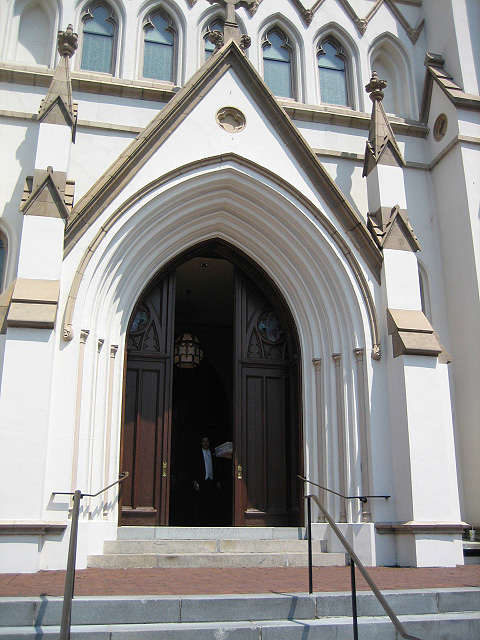 The interior, looking up a bit toward the nave. 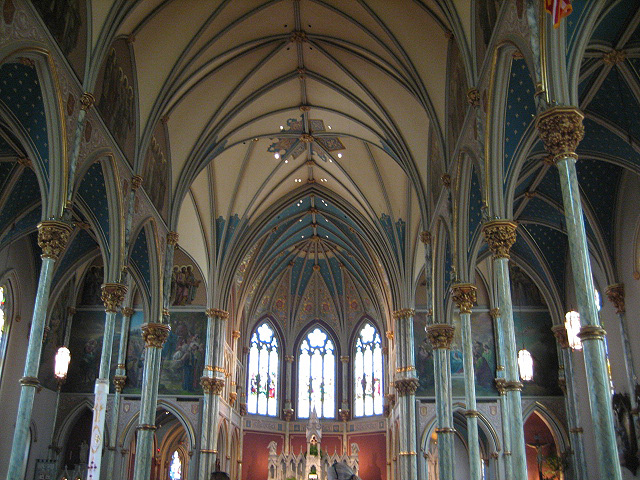 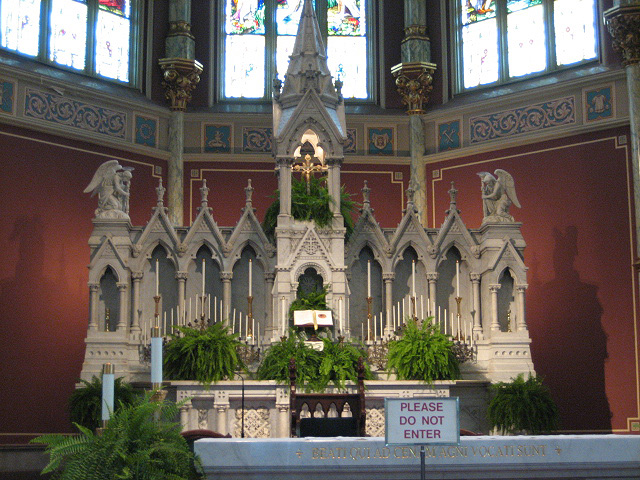 One of the many large stained glass windows, with four smaller under it. 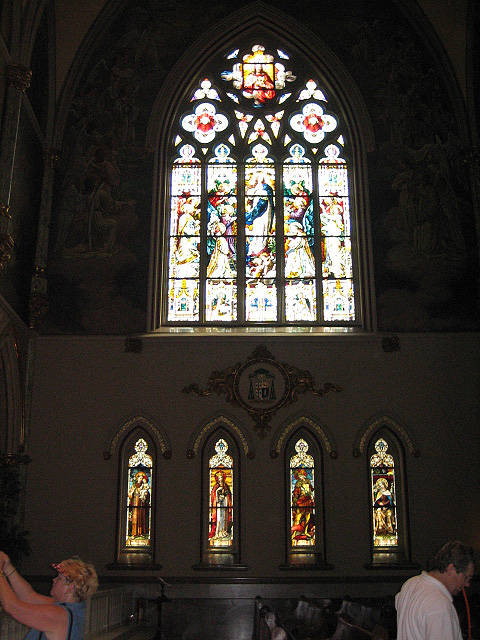 A closer look at the larger one up top. 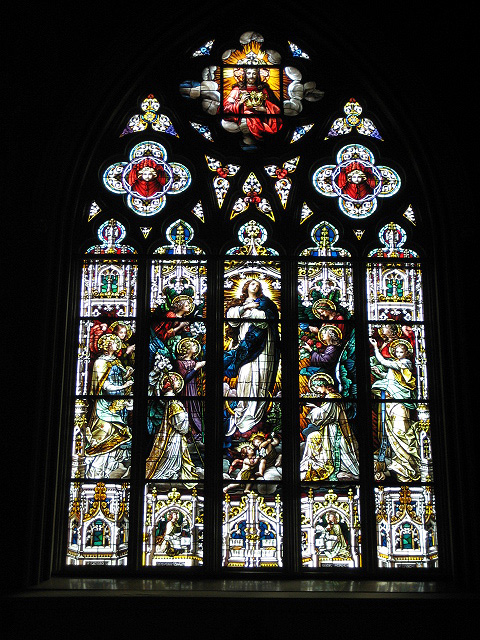 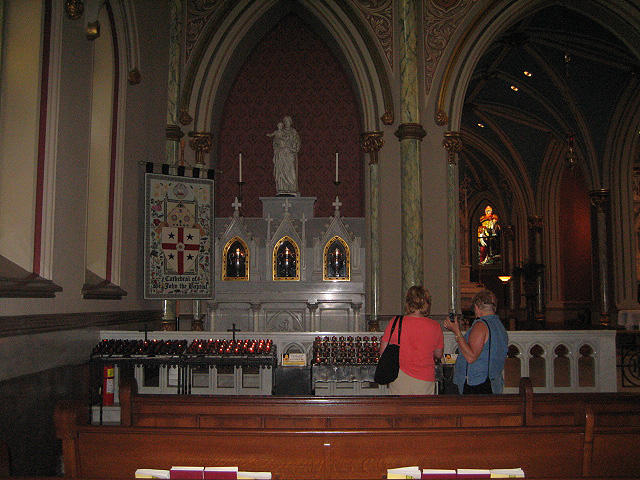 A view to the rear and up. 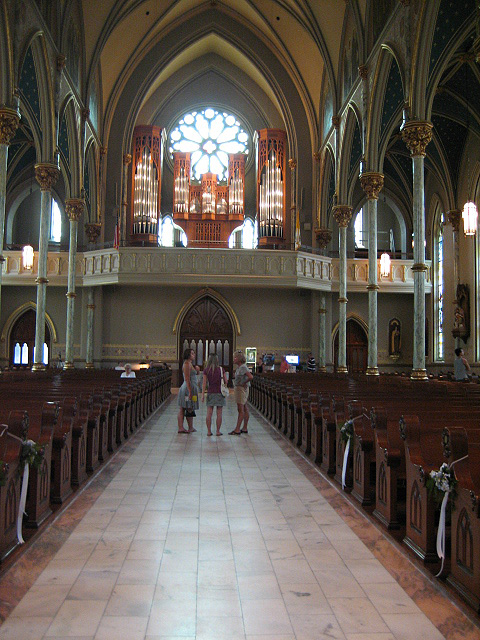 A closer view of the upper rear. 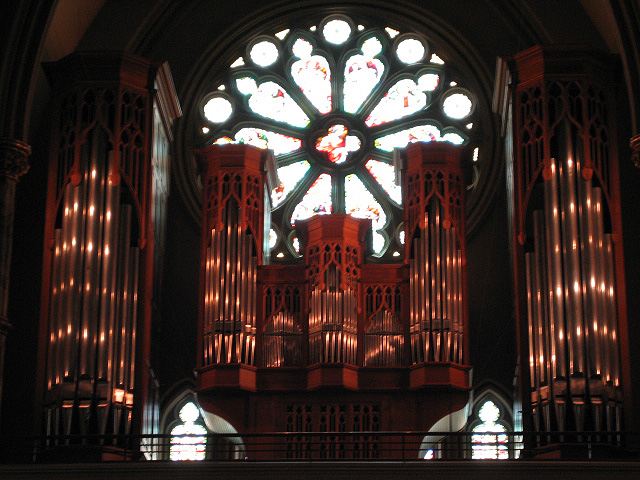 We headed back outside to the park and sat near a fountain to take a break. A look at the cathedral from that vantage point. 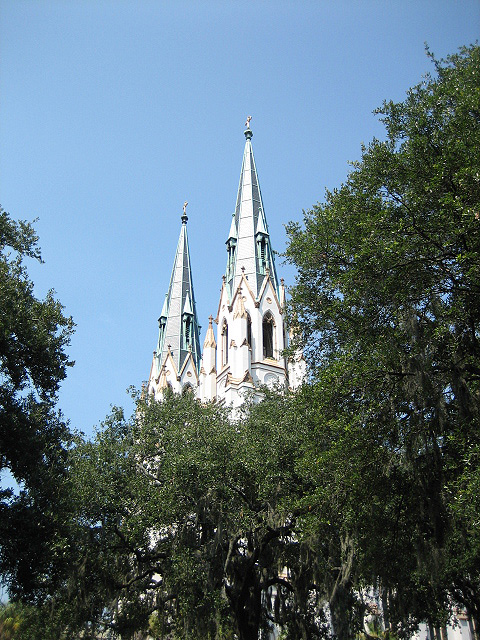 Mom and me. The cathedral is reflected in my sunglasses. 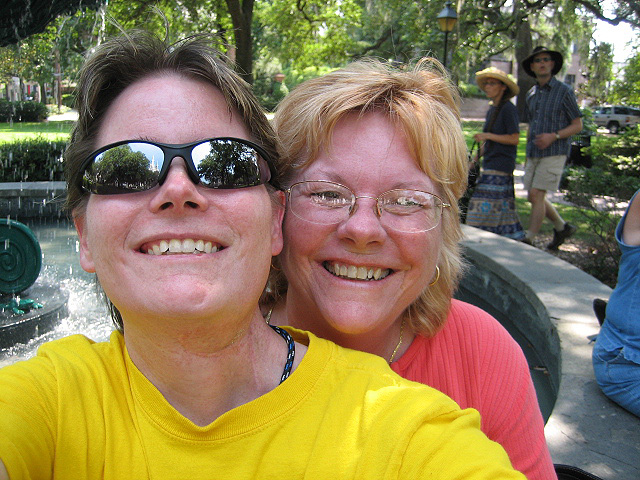 After a brief rest, we headed down and west a couple of blocks to the Mercer House. This may be more familiar to people as the house in the movie Midnight in the Garden of Good and Evil, based on the book of the same name. In fact, the book is known as “The Book” around town, and there is actually a gift shop near the Mercer House known as The Book Gift Shop. 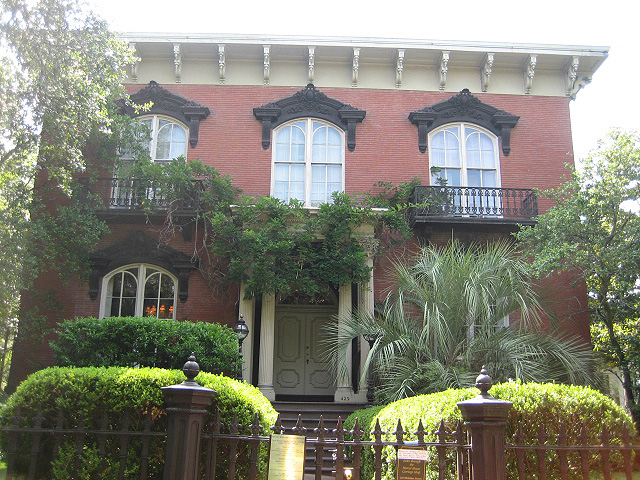 We took a tour of the bottom floor of the house, which is now a museum. Photos are not permitted within the house itself or in the sunken garden between the house and the carriage house. The carriage house is now a gift shop and is the entrance to the garden and the main house. An incredibly brief history of the house is here; they make no mention of the shooting that occurred in the house, but do mention – as our guide did – that Jim Williams restored about 50-60 buildings during his lifetime.

Our guide also told us that during the shooting of the film, because of the great number and value of the items Williams had collected over the years, no insurance company would take on the task of insuring the project. So the production company stored the goods and actually recreated a lot of the paintings within the house for the shoot. The family had sold off some of them while filming was ongoing, and the recreations were gifted to the family by Clint Eastwood when filming had completed so that the interior would look the same as it had before filming started.

Within the house, we saw the main hallway, the dining room, the lower study, the front sitting room, and the rear sitting room. The front room was instantly recognizable to me from the movie. Our guide informed us that the room was the closest any room had been to remaining untouched from Williams’ day. There was a cat – a huge, fat, black cat – sleeping in one of the chairs behind a cordoned off area. Our guide told us that the cat lived there, and could be petted, but still had his claws and might pet back. Since animals and small children love me, I went right ahead and petted the cat, who moved only enough for me to get a good scratching under his chin. Other than that, he slept through everything.

We were unable to go upstairs to see the ballroom where Williams had installed his pipe organ, as due to fire code, publicly-accecssible buildings must have two stairwells, and the house only had one. Barb was disappointed by this, but got over it pretty quickly.

From the Mercer House, we started to wind our way back toward the river and The Lady and Sons, where we had reservations for 8:30 that night. With a little time to kill, we stopped in at Jen’s and Friends (voted best new neighborhood bar, 2005) on Bull Street to have a drink. It was only a block away from The Lady and Sons, and we headed that way a tad early to see if we could get in and eat before our scheduled time. We were in luck, and were permitted entry just after 8 PM.

Out of the three days, this day involved the most walking, even though most of the morning was spent on a bus. Everything we’d been eating no doubt washed right off us as we walked around, enjoying the sights and the city.