I’ve been reading about the woman who gave birth to octuplets when she had six kids at home – or, rather, at her mother’s home – already.

I’ve of a single mind about this woman: there is no way anyone should have allowed her to go through with this. Based on her mother’s comments, she obviously needs mental health care. A little bit of obsession goes a long way. Whatever doctor was involved should also lose his or her license. I view it as inexcusable that they agreed to perform the implant, knowing what they should have known about her.

The seedlings are making good progress, and with a couple of days out in the warmer air and sunshine, even the peppers are coming up. Of course, Mother Nature has decided to turn down the heat a little, but only to just freezing at night – that still means bringing in the flats during the night, but does not mean rigging covers for the plants currently out in the flats. Next week, we’re forecast to have another hard freeeze, into the 20s, which will probably finish off our freezes for the season if that holds true. That, in turn, brings us to the guessing game: when will it be safe to begin direct sowing certain things, like cukes and melons? I could start them in three inch peat pots, I suppose, but for these, I really like to start them direct in the frames in which they’ll live out their lives – plus, I won’t have to tote them anywhere, and watering out there is much easier than watering a bunch of flats and individual pots (right now, that is: next season, I expect to have the greenhouse up, which will make a lot of this much simpler). The beauty off all of this is that gardening itself, once everything is in place, is a cheap hobby with great rewards and in almost every case – like the sungolds last season – the return is huge. Those leggy flats I had? All reseeded, for less than five bucks in seed. The most expensive seed I have is for the corn, and that only because there’s five pounds of it.

I suppose this will, in the end, be much like anything else in life: you make a decision, and you take your chances. Assuming that everything (or almost everything) in the flats comes up in the next couple of days, the first couple of weeks in March is the target date for transplanting outside. With any luck, we’d then have the first tomatoes appearing in mid to late April. That would be something for planting that is done without the use of a greenhouse.

On (yet another) visit to the dentist today – another root canal, yay – I saw these signs:

From a church: “If I’m ok and your ok then why did Jesus die on the cross?”

Beyond what I see as the lack of logic behind the question, did you run out of apostrophes and misplace that other letter e in your collection? Maybe you should pass the plate at your next service.

From a swimming pool place:

Four words.  Very simple. Is it so difficult to get it right?

By the way, if anyone happens to stumble across this blog looking for cancer-related information, especially for oral cancer, let me make this recommendation: find yourself a dentist who knows something about oncology as it relates to dental health. Make sure you get your dental work done BEFORE you go in for surgery or radiation/chemo. If you have wisdom teeth that need to come out, get them out – hell, even if they don’t need to come out, get them out. While you’re going through treatment, to avoid the rather hideous issues with trismus that I have since no one apaprently deemed it important enough to stress that this should be done, make sure you do some stretching of your mouth throughout, even though you aren’t likely to be eating or drinking much by mouth. It may be painful, especially when the burns start showing up on your face and neck and any movement hurts, but do it anyway: hop yourself up on the pain meds and do the stretching. It will be worth it after treatment when you’re able to fully open your mouth instead of having a very limited opening that makes eating diffcult and dental work (and you’ll need dental work, trust me: the lack of salivary function is hateful to oral health) a frustrating, time-consuming, and very painful event. If I had to do it over, I would have a) found my current dentist first, rather than getting a cursory review from my previous dentist who  deemed everything “ok” and left me with two impacted wisdom teeth, one of which is now starting to appear through the ripped skin at the back of my mouth and which will be incredibly tedious to address should it need any work, and b) done daily and frequent stretching exercises to keep my jaw muscles from contracting and the scar tissue from building up to the point where my opening is extremely limited at 18-20 millimeters. Know how limited that is? Put your thumb between your teeth, so the nail points either to the left or right, depending on which hand you’re using. That’s how far I can open my mouth. Don’t end up like this. 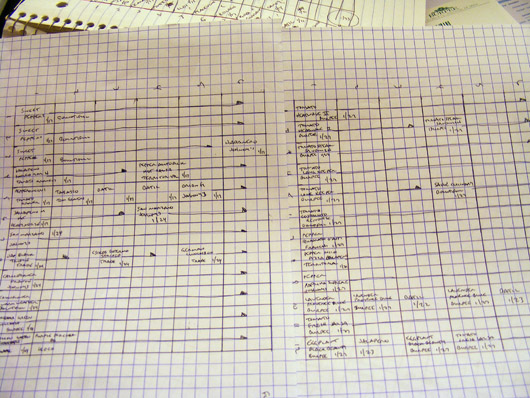 Last week, a sign popped up on our property, out by the roadside. From the rear, it was a sign for some home builder. We were going to take it down, but on the front, saw a message about a home owner’s association meeting, with a number to call.

There isn’t a HOA right now, at least not officially. We knew, eventually, there would be one, as this is a private road, with a gate, and there are lights out at the public road, all of which must be maintained. I’m not a huge fan of HOAs, personally, as it tends to bring out the fascist in certain types of people (that is, small-minded, tiny ego type people who want a drink of power, no matter how tiny). We’ve all heard the horror stories about some HOAs: can’t put a line in your back yard to dry clothes. Must keep your lawn green – even when there’s a freaking drought. I even read one blog where their HOA forbade the growing of vegetables, period, back or front yard. These are the types of things with which I disagree: they’re energy savers, economically and environmentally friendly, and should be ENcouraged, not discouraged. Other things I have no problem with – people shouldn’t be leaving rusty old cars on blocks in their yards, for instance. My other concern is that we would be wasting time debating things that are already covered by existing county-level statute: no trailers here, as an example. This is already in the zoning from the county, as this is a houses-only neighborhood. Having to discuss things like that when the laws are already codified is a waste of time, and we all know how much that appeals to me.

The number on the sign was our immediate neighbor’s cell. It turns out that the builder has been paying the light bill and the gate maintenance, and our neighbor has been paying him back (as a side note, our neighbor and the builder owned all the parcels that are now built on, and still own the vacant parcels – about 50 acres’ worth). So, it’s no surprise to me that now that there are about ten lots taken in a development that totals sixteen, it’s time for everyone to pony up to pay for these things. When we spoke to him, we told him we figured that was the main issue, and hoped that everything else would be kept to a minimum: short and sweet, with no weirdo rules. His response: “Hell, no, I don’t want nobody telling me what I can and can’t do.”

So it looks like it won’t be that bad after all. Which is good, because I’m putting in my corn up front this year. And I don’t want to hear any bitching about something you can’t see from the main road in the summer anyway when all the trees and shrubs are back to full leaf.

My poor leggy seedlings. They all collapsed. So, I’m having a do-over, as we used to say, and replacing all those not hardy enough to make it with fresh seed. The weather this week is supposed to be gorgeous (and today certainly was), so this will be a prime time to get the seeds redone and out in the sun where they belong to get a start. No doubt we’ll have a couple of freezes here and there before the typical last frost around here, but hopefully they’ll have popped up and soaked up some rays before they have to come in for the night to go to sleep. Life in the garden.

That’s my official pronouncement, and I’m sticking to it. 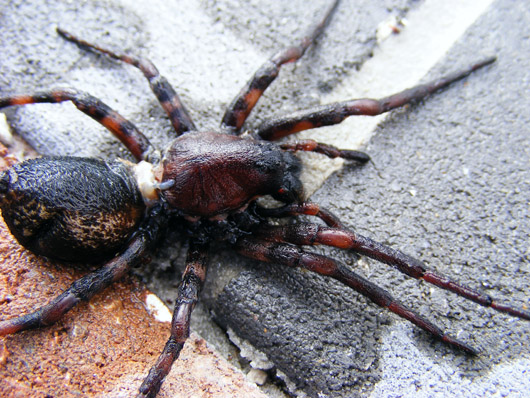 Mostly I’m sticking to that because I pulled this creature from the bottom of the deep end of the pool. Obviously it wasn’t one of those freakish water spiders I’ve seen on the nature shows that drown their prey before sucking the gooey parts out.

There are some things you really can’t tell a thing about until you pull one out of the ground. A parsnip, for instance. 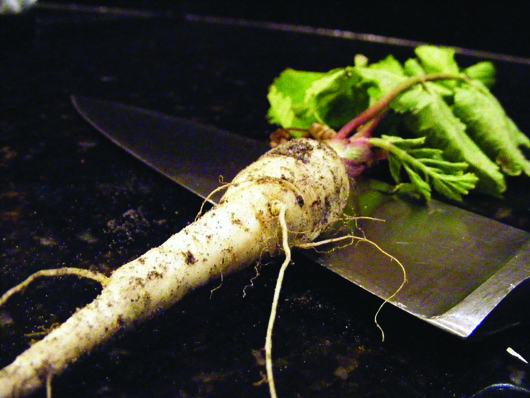 Coming along nicely. Another month-ish, and this batch should be ready to pull completely. I have some seed soaking for the next round, to be planted tomorrow. Along with the potatoes and peanuts. Not all together, of course, no matter how alliteratively that would work.Tonight, flat five: more tomatoes to replace the seedlings that are much too leggy, and more peppers.

About a week and  a half ago – just before the frigied cold snap – I had planted more sugar snap peas (shelling peas) and some bush snap beans. I’d been waiting to water them, figuring that we’d pass through the freezes and then start convincing them to pop out of the ground.

As it happens, they had other plans. 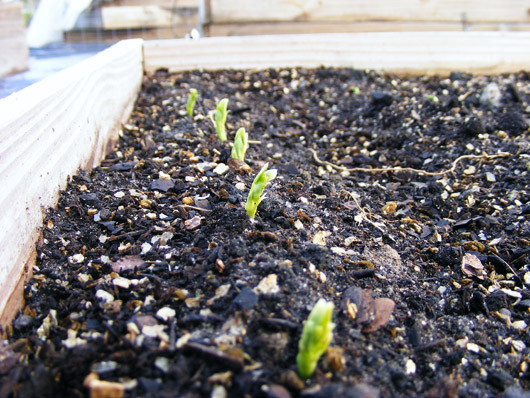 These peas are more cold hardy than I figured. I’ll let these go, and start another round in a couple of weeks.

And now, a random puppy picture: resting after an arduous ball chasing session. 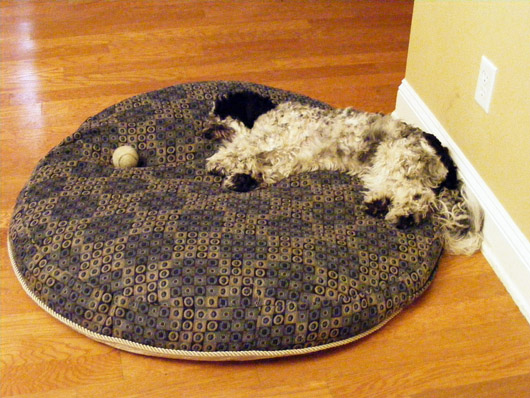 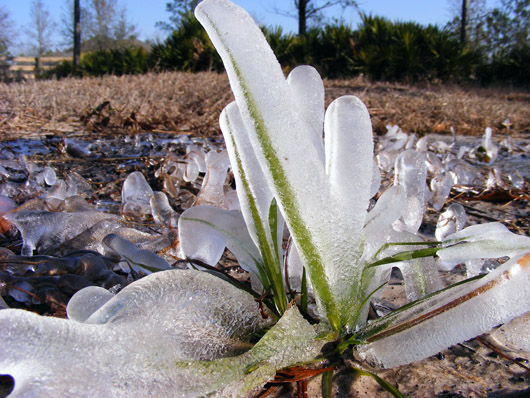 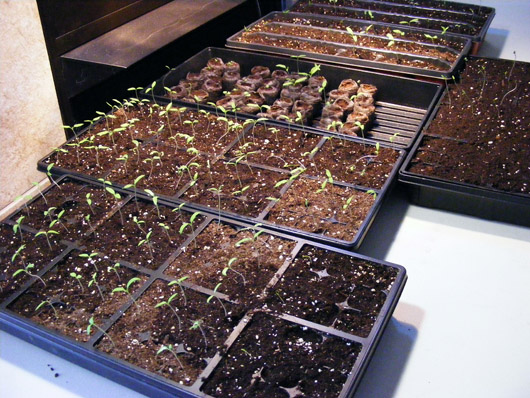 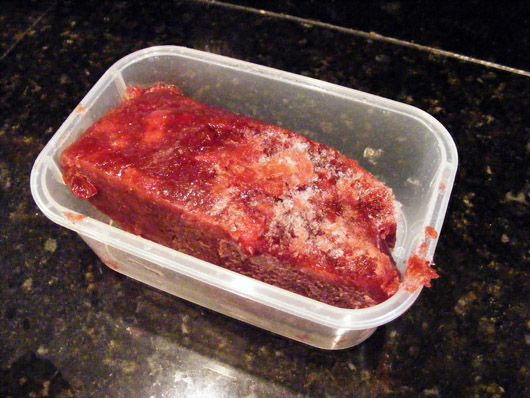 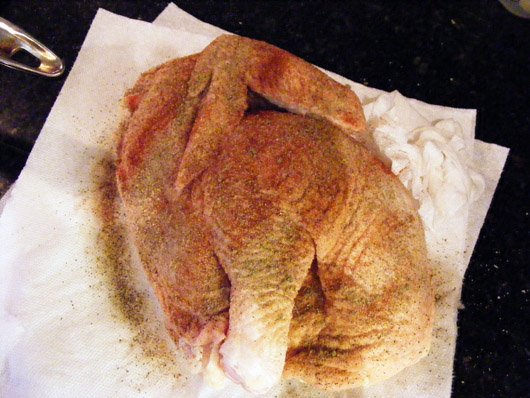