Why thank you, Yoda: you are absolutely correct.

Yesterday, I started a couple of flats almost entirely of tomatoes.

I had a few cells left, so I also started some jalapeno, cayenne, and datil pepper seed as well.

These are sitting on some black plastic on the table to keep the heat levels up. This means, of course, that they also need more than regular monitoring to make sure they don’t dry out.

I’m hoping we’ll see the first seedlings pop up by the weekend. The trick will be babying them through the next month or so and then getting them transplanted successfully.

Last year, we had some frames that remained empty as we never got anything in them due to the bugs, the wacky weather, and general busy-ness with other things. This year, I intend to fill it all. And by “all” I mean… 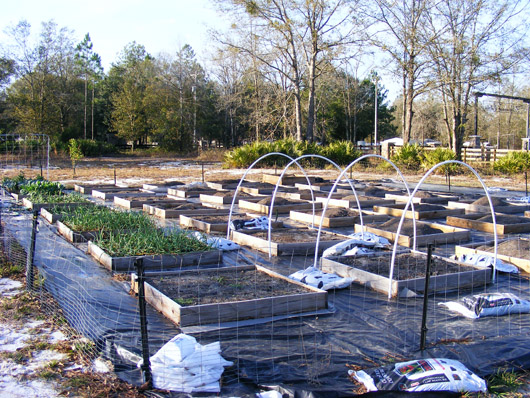 The hoop supports were where the doomed tomato and peppers resided before being evicted to the compost pile. I’m hoping to try something under cover over the next month and a half before spring arrives and turns rapidly into summer.

Parsnips, rounds one and two, to be followed in the next few days by another round. Parsnips take awhile, and are better in cooler weather, so the third will probably be the last until late summer unless I can rig a way to keep them cooler than 100+ degrees in summer without using any electricity or excessive watering. 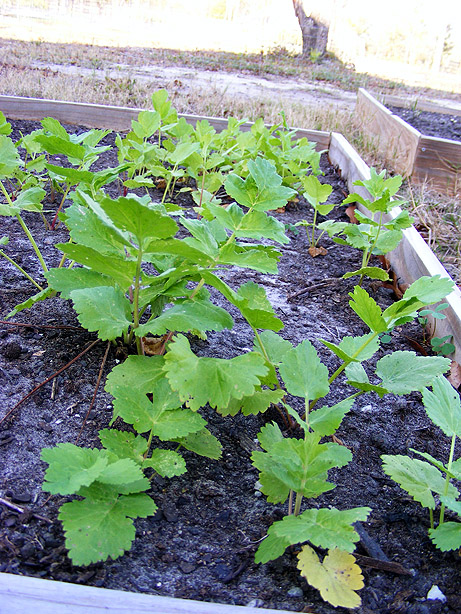 The corn frames, relocated to the front. The first frame has hard red winter wheat, which should be able to be pulled by the time I want to start the corn in March. The second has alfalfa, for sprouts. 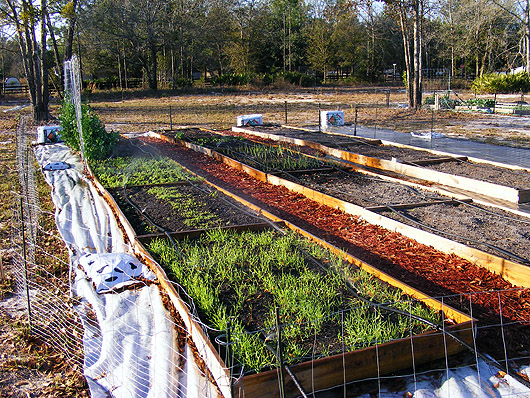 Carrots, four varieties. We should be able to begin pulling these in a couple of weeks.  I’ll be starting another round of the little finger variety in the smaller frames. 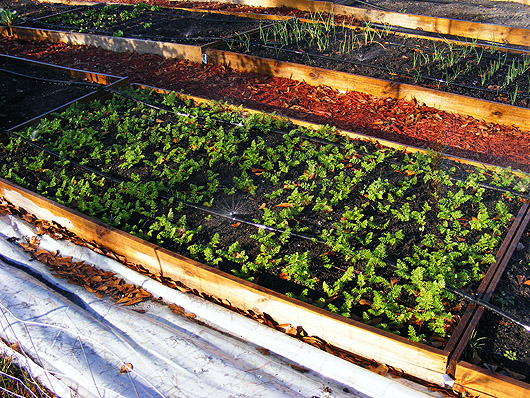 That spot there where the water head is and the perfect circle of no carrots is where a cat got into the frame before the fences went up. The bunnies also munched around the edges of the frames, taking the tops of some of the carrots down, but after I got the fence in place, everything bounced right back. Good thing, too, or there would be pictures of rabbit stew on this blog. 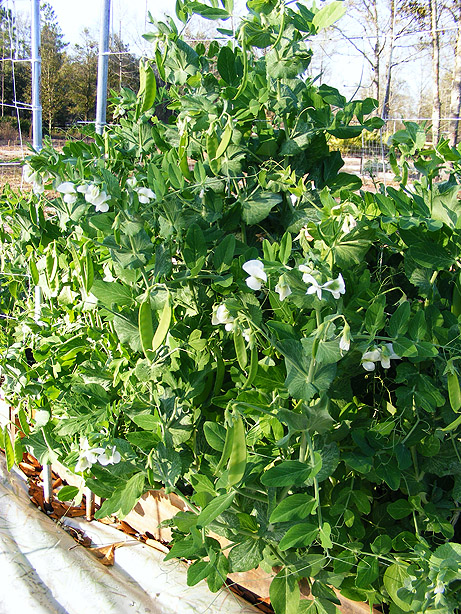 We’ve had some of these already – remember, picking makes for productive plants! – and according to those who have eaten them, they’re mighty tasty. Peas can stand a light frost, and these were not covered even during the hard freeze we had a couple weeks ago, so they appear to be winners all around.

Here we have a couple of cabbages, a round of spinach and lettuce, and onions at the far side. The frames to the left and at the end are empty except for the weeds that need to be pulled. 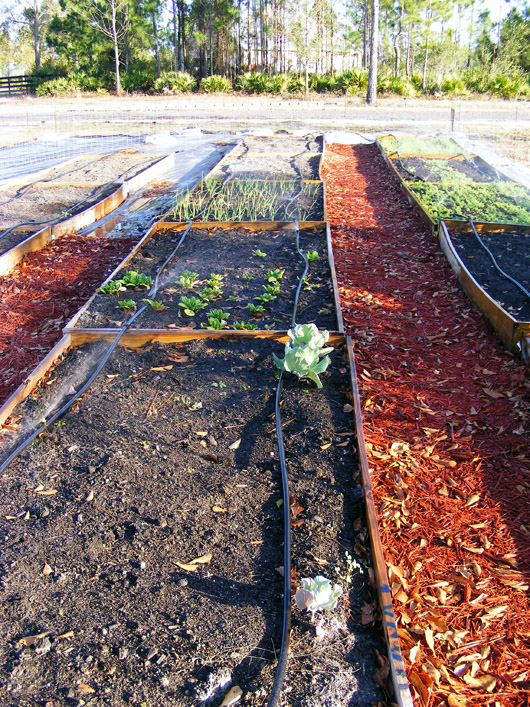 The smaller frames up front have some things in production. This is the only row with anything, and four of these are taken up by four different varieties of garlic. We loves our garlic. 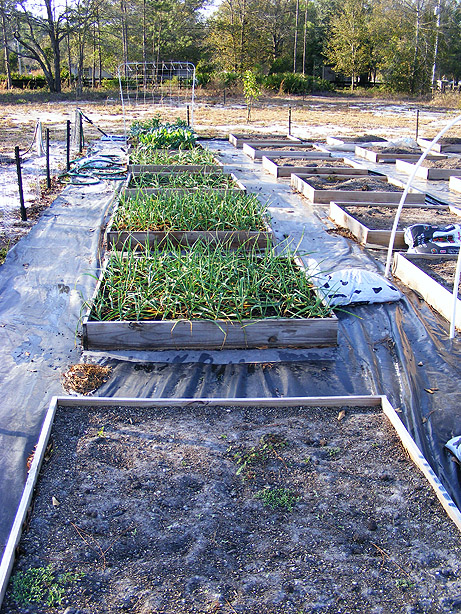 We don’t love the weeds, but they’ve invaded that first frame and need to be removed. Just another job on the farm.

One batch of the garlic I almost deemed a dud, as it did not spring up very quickly. Once it started, though, it turned out to be just as healthy as the other batches. 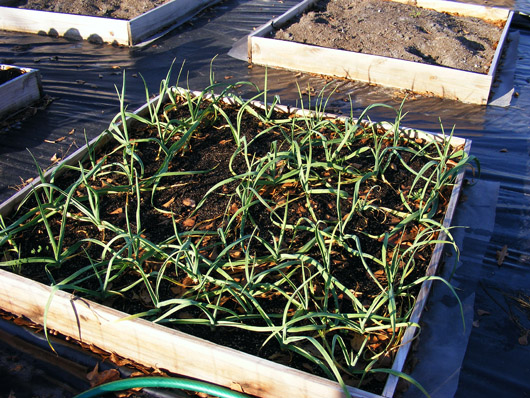 Healthy, icky brussels sprouts. Three varieties. There are some leeks in the front, and the ones that didn’t totally die off when the bunnies ate down the greens have come back strong. 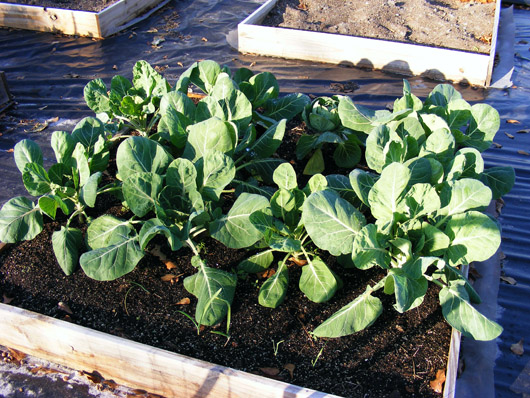 I will note for the record that the bunnies did not touch the brussels, at all. Can’t blame them for that.

Finally, broccoli and another variety of peas – shelling peas, piccolo (small) from an Italian seed. 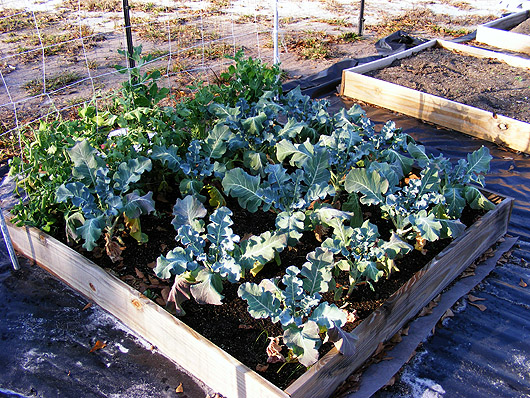 The broccoli is coming along nicely. 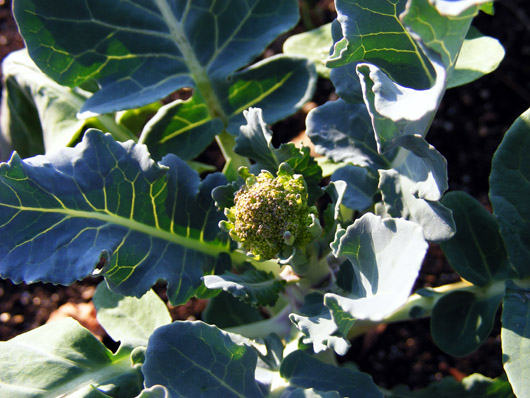 When I was keping track last year of the harvest – between 5 Jun and 7 Aug – even with all the issues we had, we harvested 132 pounds of food from the frames we had in place. This year, I’m going to keep better track and we’ll see how much we can produce on our own here.