In more ways than one. Followers of this homesteading saga probably recall that our soil, such as it is, mostly contains clay and on this lot in particular, sand. The sand is predominantly the result of this house being built after others were built; it was used as a dump site for fill dirt, excavated sand, and it’s rather remarkable the trash that continues to wash up as we receive rain here and there.

The problem with this of course is that beyond the scrub, the hardier weeds, and saw palmettos, which seem to thrive no matter what, it’s difficult to coax anything else from the ground. The guajillos loved it, the thyme I’d probably only be able to kill by setting it afire given its hardy nature, and the cowpeas (black eyed peas to those of you not from around here) were fine as well. The tomatoes couldn’t do much of anything, the bell peppers tried valiantly but only mustered two, and most of the seedlings just couldn’t hack it.

Getting grass to grow also proved to be a huge challenge: with nothing nutritious in the sand and the hardpack of the clay/sand combination making it virtually impossible for grass seed to take hold, it almost seemed that it would take many, many loads of topsoil for us to do anything with the barren front of the property. I’d rather spend the money for the topsoil to be put in the areas where we’ll be growing more productive things, really: four of the five loads we had trucked in went to the back, not only to give us something more to work with, but also, like the one load that went up front, to level out some of the hollow areas in order to give us better drainage.

That left us – or, rather, me – with the problem of the front of the property and getting grass in. It isn’t primarily to have a nice lawn. After all, if I thought no one would object too terribly much, I’d just as soon plant vegetables and fruit trees all around the front of the property. No, the primary reason to get something down out front is erosion. The wind here blows mainly from the plain…I mean, from the east to the west, and there is rarely a day with no wind. This results in the sandy part of the soil mix flying off, leaving only the hardpack. This further results in flooding, as the hardpack of course does not drain particularly well, as the older photos from our rain and tropical storms show. What is an aspiring farmer to do?

Lots of backbreaking breakup of the hardpack. Lots of organic additive to get something nutritious into the soil. Lots of grass mixes (fescues, perrenial ryes, bahia). And lots of hay, spread by hand after getting the seed down. This what it looks like on November 16. Some small patches of grass are there from the first attempt to just see what would grow with with seed put down and no other real work done beyond the addition of a bit of topsoil (not much). 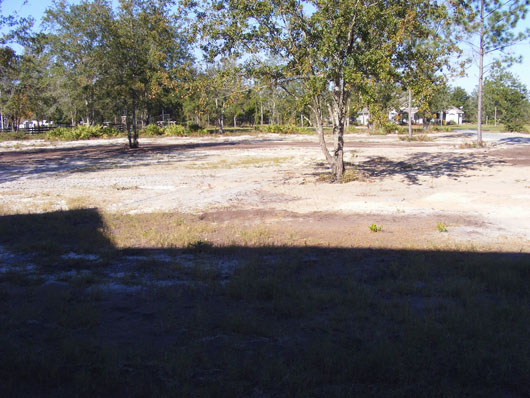 With a lot of other work, on December 2, it looked like this. 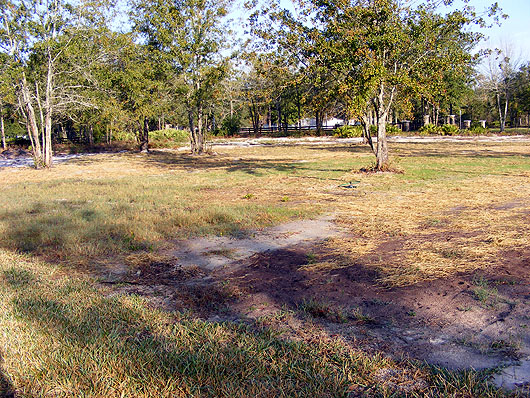 And this is today. 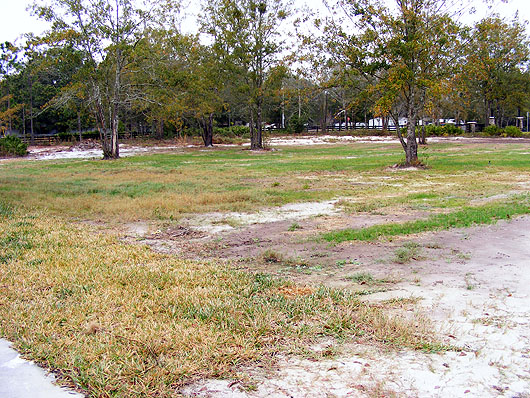 The edges of the area are places where no work has been done on getting grass down, as other work needs to be done first. The far area in the above image has a giant mass of blackberry bushes that need to be dug up and burned so they don’t reroot and come back. The pile near the left of the picture behind the tree is the debris, including saw palmettos, that Wade the tractor guy cleared out from these trees so we didn’t have to spend the time digging them out by hand. There is something to be said for doing that sort of work by hand, but there are also limits to the amount of time available when there is also a huge list of other property-related work that also needs to be done (and that is also much more fun, even if it is still hard work).

Once again, here we are at the end of one year and the beginning of another. Once again, it will be time for people to make a list of resolutions the cynic in me says they will never keep. Ironically, although I have never really been prone to making such lists, I had started one the other day, and one of the items on that list was to be less cynical about people and their motives. Another is to be calmer in the face of abject stupidity – I suspect that these two actually go hand in hand. Years ago – and this is many years, since it was two exes ago – I had a fairly profound interest in Zen Buddhism. Not to the extent that I am a particularly spiritual person. I am not. I am also not a religious person, much to the dismay of my sister, who is, and who finally settled on Catholicism as her religion of choice. Most of my interest in this is for the human factor, and to me it’s a lot like any other stress-reducing pursuit. As I was reviewing the past couple of years and all the assorted activities that have occurred, I told myself it would be worth my while to take up that interest again, and so I have. I expect this will help immensely in dealing with the people we have to deal with every day, and also help with the anxiety that every day brings as a result of that one singular day when the biopsy came back positive and the snowball that developed from there.

I also told myself that getting back out in the yard and working around the property will help, both physically and mentally. Getting the greenhouse built – what, you didn’t know that was planned? – will enable some experimentation with growing things out of season, inasmuch as anything really is out of season down here. This is Florida, after all. Plus, I’ve decided to take up another hobby: soap and candle making. Not very complicated (or, rather, only as complicated as you make it), relaxing, and in the end, a useful product, all of which satisfies both the left and right brain requirements. Who knows, that might be another side to the business here as well, but we’ll need a snappy name for it. My lack of sleep combined with one side of that (the soapmaking) may bring about echoes of something else entirely, but I think leaving out the underground fighting and general mayhem won’t be a real issue to overcome.

With all of that, plus two additional brands to finally launch, 2008 should be very active indeed. Here’s hoping it will also be happy, prosperous, safe, and healthy for everyone.