Tomatoes. The star of the garden. They can be rather diva-like – the heirloom varieties especially. For four years straight, for instance, I tried to grow Cherokee Purples. I think we got half a dozen fruits off them. While they were tasty, they were too much of a pain, so I set them aside.

This year, I tried to limit the number of varieties. Ha! Just kidding! No, really, I did, picking the ones I thought would be best for eating, canning, making sauces, and so on, a mix of determinate and indeterminate varieties, and a mix of things that would mature from early to late season.

I transplanted the majority of these in April, and they are doing very well.

I even found the first fruit out there.

And some art, courtesy of Mother Nature.

With the appearance of the first fruit, it is now a race between me and the pests: who will overcome the odds against them and be crowed master gardener? I’m afraid we will have to wait and see how the season progresses.

Still working on editing some videos. it would be nice to be able to devote some serious time to learning the software – I picked up Vegas Pro (thanks to Stacy for that recommendation, via her kids) and we’ll see if that’s a tad more friendly to people who just don’t have the time to get really into the guts of Premiere.

Until next time, peeps: be well.

The tomatoes got zapped.

This is not for a lack of trying to keep them alive, though. It was simply too cold and the plants far too stressed from the weirdo weather we’re having this “winter”. It got down to 27F by Saturday morning, and while they looked not too bad when I uncovered them that morning, in the bright light of an 80F day today – I told you the weather was weird – they are unrecoverable.

I will say that the makeshift covers to mimic a greenhouse environment were not terrible, however. It kept them safe from the first round of freezing two weeks ago. I’d like to either get my actual greenhouse situated somewhere on the property, or get a design finalized that will make it far easier to pull the covers on and off of the tender annuals here at the ranch – for us, that’s tomatoes and peppers. The second round of freeze was harsher than the first. But, a valuable lesson learned, and ideas for better covering of the rows are on paper and I’ll be looking into the best way to do this – most importantly, the best way it can be done by one person (me) who has issues raises one arm over shoulder height and needs something that is not completely exhausting.

The brassicas – broccoli and cauliflower – didn’t seem to care all that much, covered or not. But the heads were a tad smaller than in the usual spring season; again, a product of the wildly fluctuating temperatures.

Above: broccoli along with cheddar and graffiti varieties of cauliflower. Most of that was sent home with my sister.

A new season is upon us, and it’s time to get back to poring through the seed catalogs, trying to restrain myself from ordering one of everything. One of my goals this year (because I don’t make resolutions) is to post every day to the blog in 2017, even if it’s just a post about the weather conditions. Everything I’ve read on forming habits says that the goals should be attainable – that is, not huge goals, but smaller chunks of the larger, ultimate goal – and not reliant on someone else’s involvement to get to the goal or reliant on circumstances that may never come.  The goals should also not necessarily be on the actual final goal, but on the processes/steps that lead to it, to avoid the dreaming brain from visualizing that ultimate goal from being done, which sends the brain signals that it isn’t necessary to pursue it. This one goal will force me to write something every day, which I hope will feed over into my actual fiction writing as well. It isn’t so bad getting into the mood to write up something once you just get the fingers moving.

I’ve also started a new project that will involve weekly postings to another blog: another attainable goal that does not rely on anyone else, and also involves a deadline, which will require me to get it done.

All those things I studied on for the past month also said setting new habits and/or goals is also easier to do if you announce your intentions to someone/anyone. I’m not certain who reads this here blog anymore, but I am hoping 2017 will be a return to longer-form writing instead of people zipping through useless, inane facebook posts or 140-character shorthand tweets. I have not been on facebook generally at all for over a month now, except to update the pages I am maintaining. I’ve found it to be a great relief not to be sucked into that time pit, and life is better for it.

Before the last deep freeze invaded our area, I hustled out and pulled every decent sized tomato off the vines of the late sets I had going. It looked like this.

I was a bit concerned that they would not ripen from their green state, and I’d have to haul them all out to the compost where they would serve a useful, if less tasty, purpose. I’m happy to report that my fears were misplaced, as I have a nice multicolor table going on.

This baby is a Cherokee purple, one of the finest tasting tomatoes I’ve ever had, and an heirloom to boot. In the images of all the tomatoes, these are the darkest green, with an almost black coloration at the shoulders.

Fresh tomatoes in December? Why, I don’t mind if I do.

This is a tomato variety called Stupice, started from seed on Jan 28, transplanted to the garden on March 5, first fruit April 4. 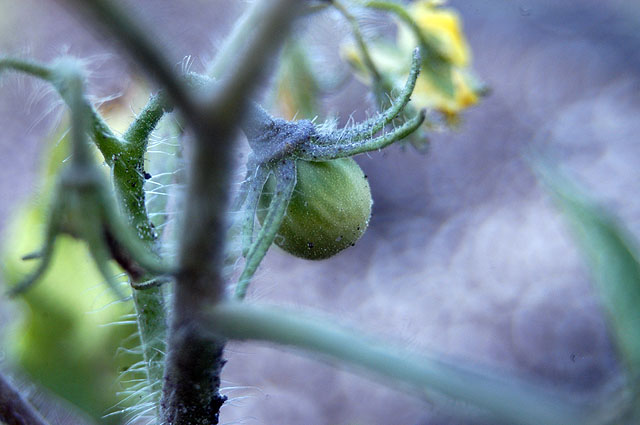 There are about 65 of this type of plant out there, some of which are already fruiting, which is about on track with its 56-60 day cycle from transplant. The next varieties we’ll be looking toward fruit (and which are already transplanted) are Glacier, Amish Paste, and an experimental variety sent to me courtesy of Shumway, seeded Feb 10, and transplanted on March 16. The next transplants to go in will be the Cherokee Purples, seeded on Mar 5, but already outgrowing their flat.