We’ve reached the penultimate day of the challenge. It’s taken longer than 30 days to complete this challenge, but no one is counting, really. And what have you learned, Dorothy? Or, rather, what sort of tips have you come up with after all this?

1. It would be easier if everyone was sort of on the same schedule. Not just daily life/work schedules, but eating schedules as well. It isn’t so difficult to work around schedules when the time difference is within a smallish window – an hour or two. But when the difference is several hours, or when someone isn’t eating at all, it’s much harder for the home cook to make dinners that consist of things that aren’t just stuffed into a crockpot – or for people to avoid those salt-laden, junky prepackaged foods.
2. It’s a good idea to plan meals in advance. Deciding at the last minute on what’s for dinner often results in too many trips to the store. Planning allows you more time to spend finishing the cooking so you can enjoy the time with family and friends.
3. Going hand in hand with that: it’s a good idea to keep the pantry well-stocked with certain basic, non-perishable items. I’m not talking about Sandra Lee-type nonperishables, either. I’m talking about real food. Chicken stock (if you’re not making it yourself) comes immediately to mind. Pasta (again, if you’re not making it yourself). Canned tomatoes. Rice, several types if you’re into that sort of thing. Flour (all purpose will do; if you bake often, obviously you may have other types on hand). Dried or canned beans. Honey. Soy sauce. A variety of spices.
4. Learning to balance the likes and dislikes of everyone who may be joining you for dinner can be trying sometimes, but the end result is worth it.
5. Buy in bulk. This probably goes without saying, but in conjunction with number two above, this can save you some cash if you plan ahead, as you’ll be less likely to make an impulse-type purchase of something you can get more cheaply in bulk (like, say, deciding as you’re off on one of those quick trips to the grocery that you might as well go ahead and pick up a pack of three boneless, skinless chicken breasts while you’re there instead of planning your trip to the warehouse).
6. Trying to cook everything, from scratch, in a short period of time – like a couple of hours – is unlikely to be practical if you’re recovering from a major medical issue. Pace yourself.
7. Get honest feedback from your eaters and take it for what it is: constructive criticism. This will improve your cooking.
8. If you’re trying to feed your eaters some kind of special diet (lowfat, low-cal, gluten-free, or whatever else), do a little research and be creative. Just because someone wants to eat lowfat doesn’t mean you need to feed them no fat, and if you try, they’ll probably revolt.
9. On that same subject, remember to break out of the special diet mold from time to time. For a reasonably healthy person who is trying to eat lowfat, the occasional steak here and there isn’t going to kill them.
10. Have fun. Think of yourself as an artist with a palette of food available to you. Eating healthy home-cooked meals is not only possible but could be one of the best things you’ve ever done for youself and those you love. As an added bonus, it can also be done quite reasonably, budget-wise.

Monday, my plan had been to get the lawn mowed and then make my tomato sauce. One out of two ain’t bad. After finishing the lawn duties, I was whipped, so took a brief nap, and then had to come up with something for dinner, as no one around me had any suggestions whatsoever as to what they wanted. So, as usual, their personal chef came up with the menu: orange-glazed chicken, rice pilaf, corn on the cob, and broccoli with (lowfat) cheese sauce.

The chicken was seared and then put into the oven, where it was glazed a couple of times with a mixture of orange marmalde, soy sauce, lemon juice, salt, pepper, and dijon mustard. Sounds like a strange combination – it sounded strange in my head, to be sure – but it worked quite well. 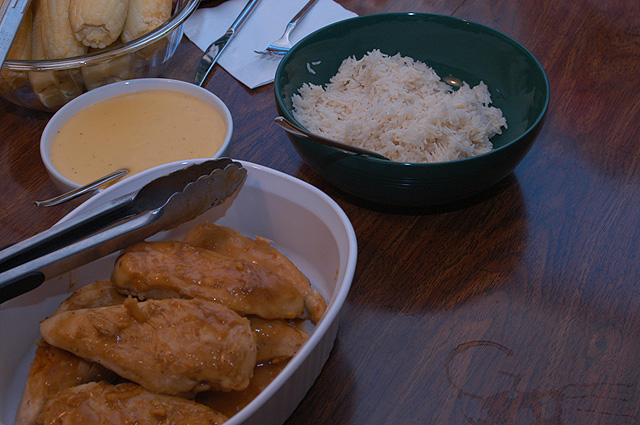 Yours truly managed to grab the handle of the large stainless steel frying pan after it came out of the oven. Not bright at all. Fortunately, it appears my reflexes are still quite fast, and I let it go instantly. No blisters or anything popping up on my hand, thankfully. 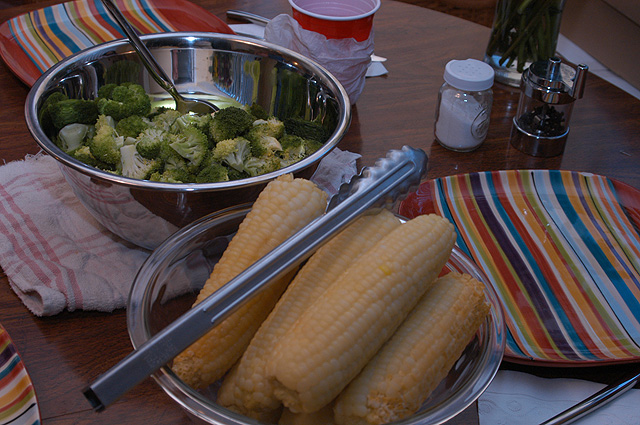 Since it appears that I can only do one rather intensive activity per day, Tuesday will be sauce day. I also need to plan some menus. Planning is definitely key, and something I’ve been a slacker on throughout this entire challenge. Thursday will be another largish gathering for dinner, as will Sunday.

A friend pointed out to me in email (to which I have yet to respond, because I can be so horrible at keeping up with correspondence – sorry, Julia!) that I might want to consider this challenge for other seasons as well. After all, summer’s bounty only lasts so long, and the other seasons will give me other challenges and afford me the opportunity to make other kinds of dishes. Now, we don’t really have “seasons” down here as in other places. It’s summer for a long, long time, then suddenly it’s 30 degrees out for a bit, and then we’re into spring, warming up rapidly to another round of summer. Still, the produce tends to know when it’s fall, and even though at least one of my diners has something against braises, those are perfect for long winter days and nights. That same diner has something against soups as well – maybe she’s just not a winter type of gal – but a nice big pot of spanish bean soup with ham and some crusty bread can be just the ticket on a cool fall/winter evening. I may continue indefinitely with the costing per meal and per diner as I’m able, just to see what differences there are between what we eat when the produce breaks in a giant wave on the farmer’s market and grocery store and what we eat when the tomatoes are out of season (or hothouse tomatoes) and suddenly the Vidalias are gone for another season. It should be interesting. At least it will be to me.