For years, I would never eat any mollusk. No oysters, no clams, no mussels, not in chowders, none of them fried. It may have been due to the way they looked, or perhaps because their only function seemed to be to filter nasty things through themselves and thus be icky and mucky on the inside.

I got over that, for the most part, and have quite a fondness for clam chowder. Not the tomatoey Manhattan style. No, for me, it can only the calorie-laden, creamy new England style. I still won’t eat oysters, but I do have to try the clam chowder anywhere I go if it’s on the menu.

Over the years, I’ve made clam chowder from scratch several times. Some batches have been rather good. At least one was dreadful, no doubt because the clams themselves were not altogether good.

Monday, the day of my hours-long trip to the dentist to address a couple of cavities – one filled easily, the other not quite so, since it was both a replacement for a cracked filling and deep in the back of my mouth, which, as we all know, I can’t open even two fingers’ width – I decided that since it was turning a little cooler and because it’s been gray and rainy, chowder would be good.

Like most soups, clam chowder is fairly simple to prepare. I knew my sister wouldn’t eat any, and I wasn’t quite sure about The Boy, but I knew that both my mom and I would eat it and picked up three dozen littleneck clams for our batch. They were pretty clean, and after scrubbing went into some sauteed garlic, water, and dry white wine. 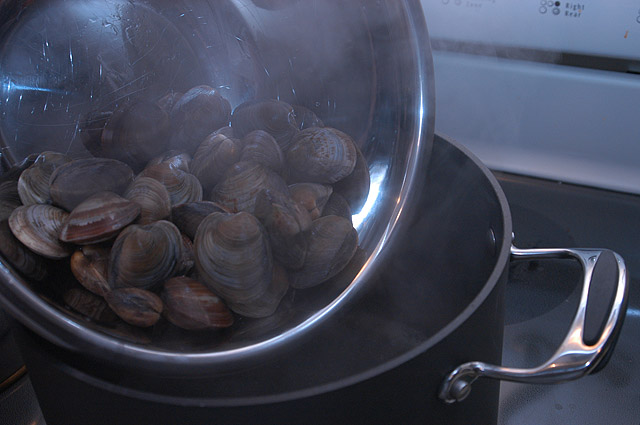 The thing to remember about shellfish – and anything else, really – is to avoid overcooking. Shellfish get rubbery and chewy and just aren’t all that much fun to eat if they’re overcooked. 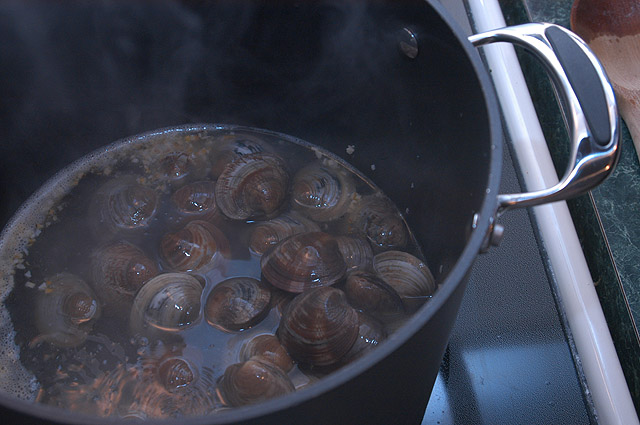 Ours went about seven minutes before they opened. I strained them, reserving the cooking liquid. 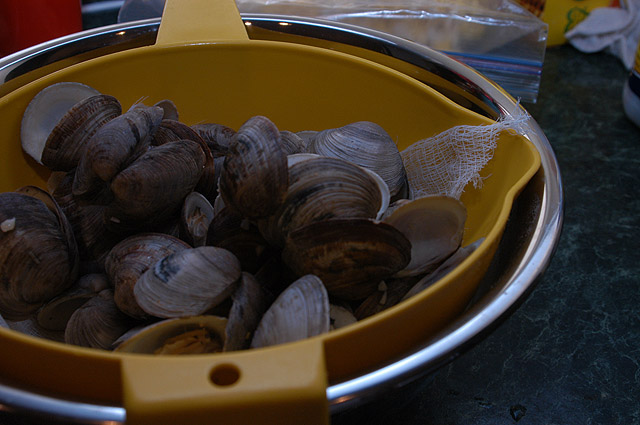 Thye were content to hang out while I rinsed out the pot and started the rest of the soup. 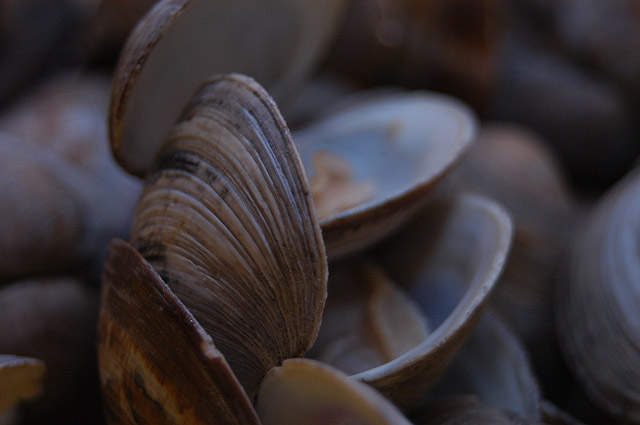 I love leeks, but don’t get a chance to cook with them as often as I’d like. I should change that. After all, they’re good in more things than soups, and good with more things than bacon that’s been browned off in a touch of butter. 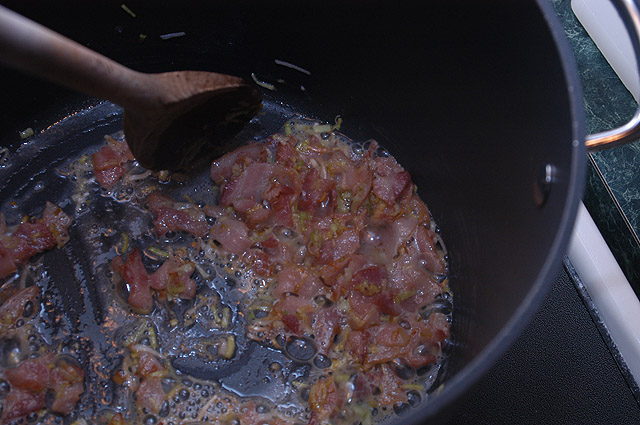 But what’s a clam chowder without that reserved liquid, cream, some thyme, a dash of salt and pepper, and some small cubed red potatoes? And those clams, of course, pulled from their shells and chopped. 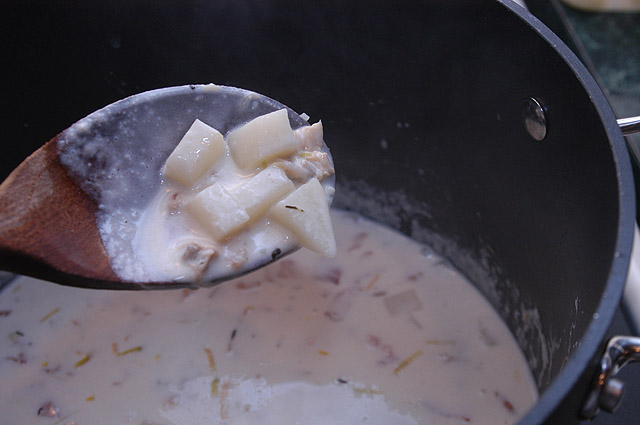 To go with our simple meal, we had bread and some cherry tomatoes, sauteed in a bit of olive oil, and seasoned only with salt and pepper. 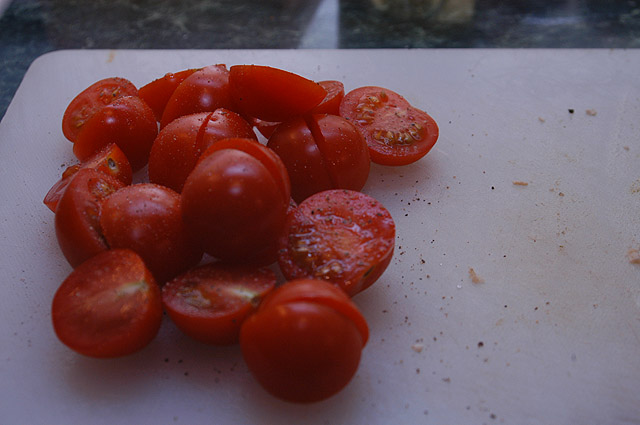 After letting the clams warm up again in the chowder, pulling apart some fresh mozz and picking a few leaves of fresh basil from the plant outside, it was time to put it together and call it dinner. 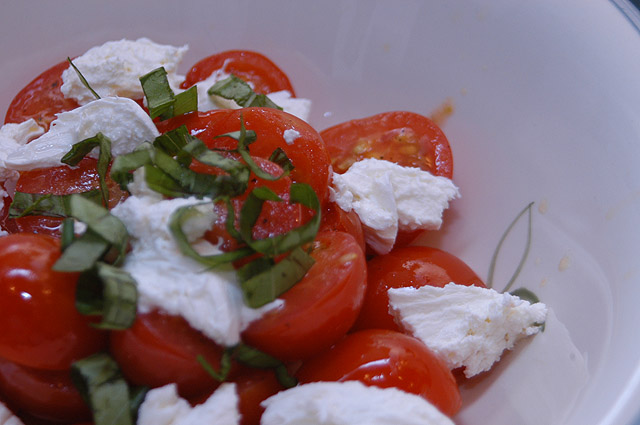 Just in time to watch the Ohio State – Florida game, too. 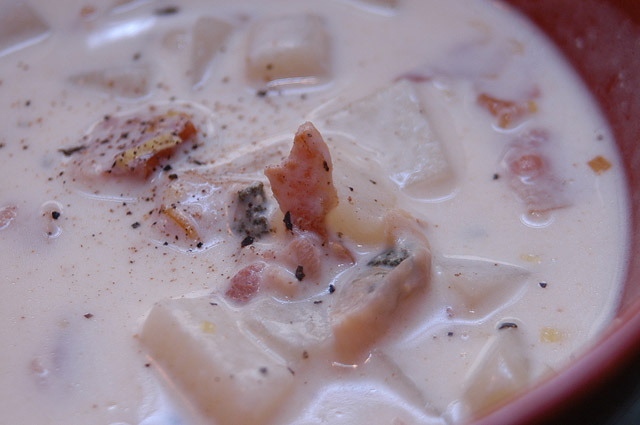 Delicious. Simple. Two of the finest words that can be put together about a meal.