We finally got to bring mom home from the hospital at 5:30 Tuesday evening. After being up all day Sunday, not sleeping at all that night, taking her to the hospital at 5:30 AM Monday morning, spending all day at the hospital with her, finally getting home at 10 PM, then foolishly working into the wee hours and not getting nearly the amount of sleep I needed Monday night..well, I was tired yesterday. Waiting for the doctor to get his ass to see her and sign her discharge papers (since if she left without it, her insurance would not pay for any of it) was maddening, since it meant I really couldn’t do anything that required me to be out as we had no idea when he’d appear and we’d be able to get her home. But this is the way things go sometimes.

Once we managed to get her sprung from the hospital, it was time to decide on dinner. After all, she’d been on liquids only Monday after surgery (even though we cheated and brought her some of that bread you saw in a previous entry when we brought in the cucumber-avocado soup), and Tuesday’s hospital food offerings weren’t exactly haute cuisine. We had some steaks left over from the boneless whole ribeye I’d cut awhile back, so that was dinner: grilled ribeyes, along with mashed potatoes, steamed broccoli, sauteed onions and mushrooms (baby bellas and button), and a gravy I made in the pan used to saute those onions and mushrooms. A fine meal.

But I’m getting ahead of myself.

Monday morning, bright and early – ok, early, but maybe not so bright – my sister and I took mom off to the hospital. A very, very brusque woman at the surgical checkin desk grabbed up a clipboard and then instructed us and another woman (and her husband) to follow her. We were stuffed into a semiprivate room on the wing, and the two ladies were told to change into those ever-so-lovely and fashionable gowns. And brown booties with no-skids on the bottoms, so they wouldn’t fall and break their heads or anything else. 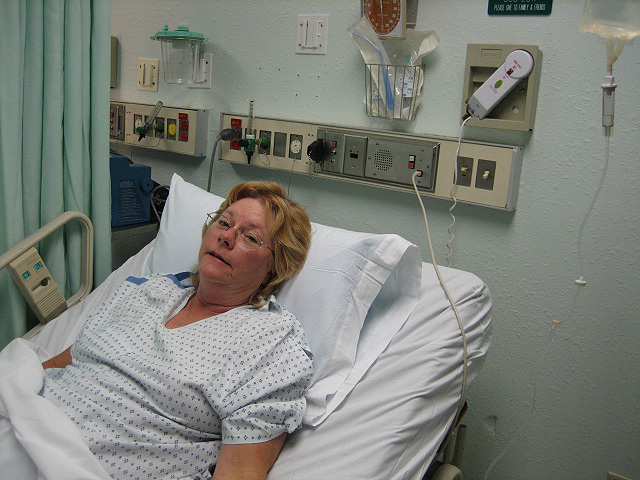 Mom’s surgery was scheduled for 7:30, but we had to be there at 5:30. Why? Because there are ten thousand questions they need to ask, some repeatedly. They also have to check the wristband every time they want to do something with you. There’s blood to be drawn, vitals to be checked, releases to sign, and on and on.

Then, we waited some more. 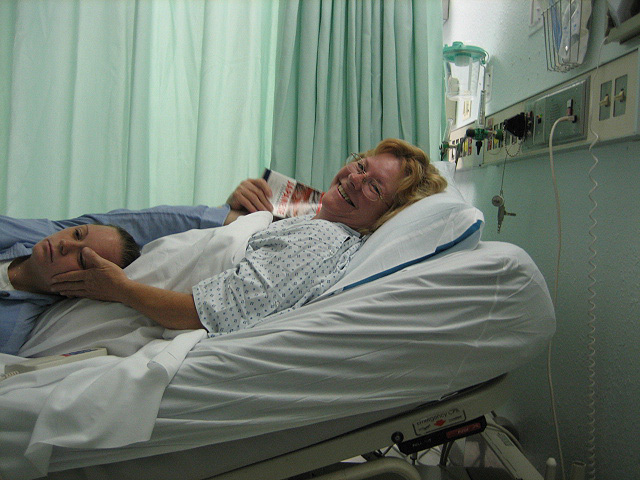 Mom wasn’t allowed to have food from Sunday mid-morning onward, but my sister and I went in search of coffee. What we found was a substance pretending – badly – to be coffee. I told one of the nurses I hoped they drank something better in their own breakroom.

Finally, it was time to go down to the surgery holding area. Only one family member is allowed in with the patient, so I went and my sister deposited herself in the surgical waiting area. The anesthesiologist showed up, along with Mo the OR nurse and Larry the recovery nurse. All very nice, quite pleasant people, I must say. We went through all the questions again, the armband checking again, and my mom once again tried to talk anyone she could into letting her go home that night rather than staying overnight as the doctor ordered. They were nice about it, but told her it was the doctor’s call. Ah well, can’t fault her for trying. The anesthesiologist pumped something into her IV drip, and she rapidly went into lala land – but didn’t stop talking about anything and everything. When I had my surgery, the last thing I remember in the holding area was the anesthesiologist telling me they were giving me something to make me sleepy – not sleep – and it knocked me out anyway. Since she was in good hands, I went back to the waiting area, where I found my sister sleeping on one of the couches.

The hospital is a Catholic one, and the waiting area had huge stained glass installations on the wall across from us. I wanted to get a few pics, but hospitals are so weird these days about cameras I decided I should try and grab a nap in the hour and half mom would be in the OR. Dozing in a huge waiting room, with people right beside you talking nonstop and kids running around screeching is not easy, nor is it relaxing. When the doctor came to talk to us about how it went – very well indeed – and the nurse told us it would be about an hour or so for mom in recovery while they kept an eye on her and got her a room, I decided we simply could not face the demon children without sustenance. We went in search of food. 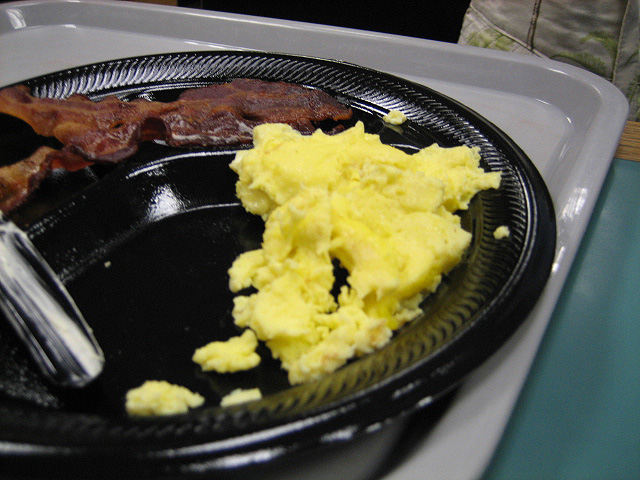 She also had a giant waffle. 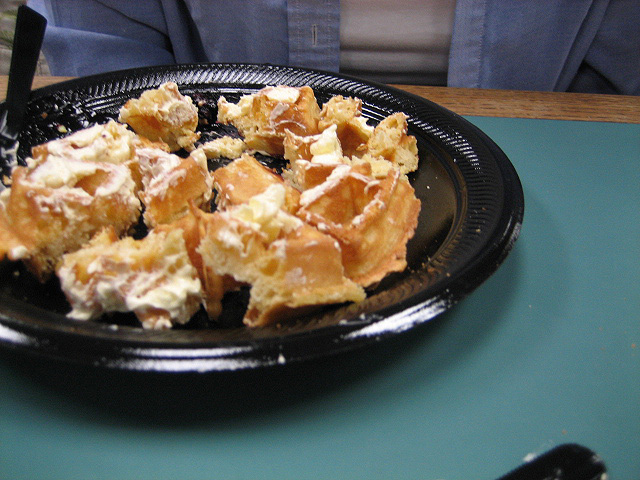 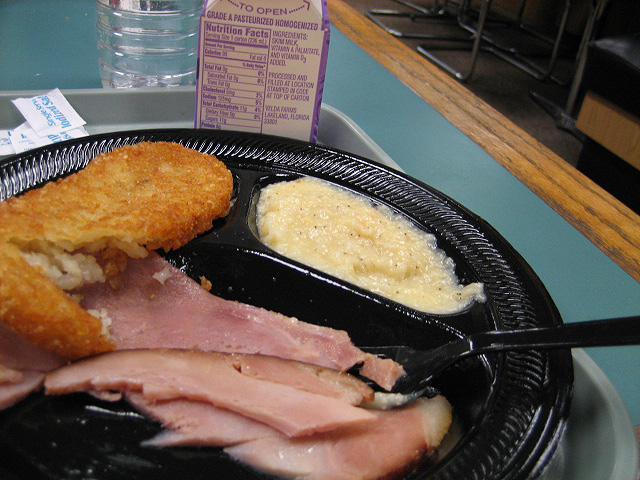 And my sister told me I should get an eclair. I did. 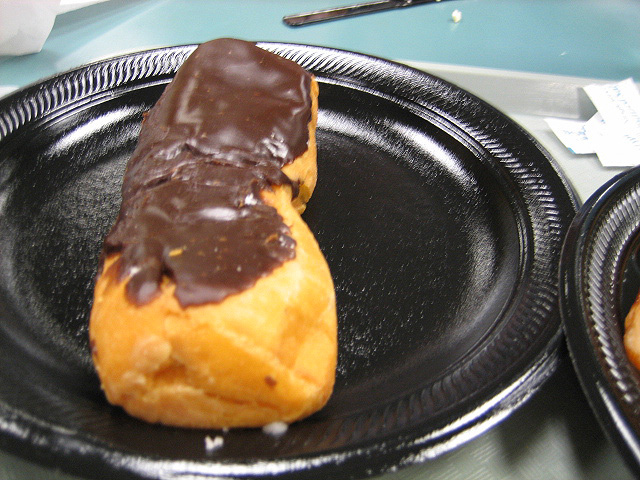 This was the most edible thing on either of our plates. I managed a third of it, and in the process sucked down all the milk plus all the water I had left in my bottle. Doughy, custardy, chocolatey goodness, even if it was industrial. I told my sister I was going to make some, and some cannoli as well. She suggested a name for our bakery, if we ever decide to open one: Take the Cannoli. One of the best lines from any movie, ever. I nixed the leave the gun part of that.

Back to the waiting area. It wasn’t long before the waiting room volunteer was looking for us. “3315,” she said, and walked away.

We went up, and there was mom, still a little dopey from the anesthesia. It was time to make all the phone calls. 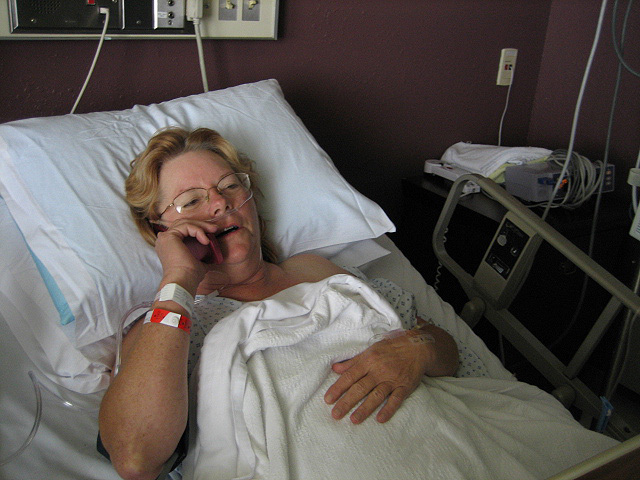 Hanging around a hospital room all day long isn’t fun, whether you’re the patient or the support. We kept an eye on her, helped her to the bathroom, and watched a storm roll in. 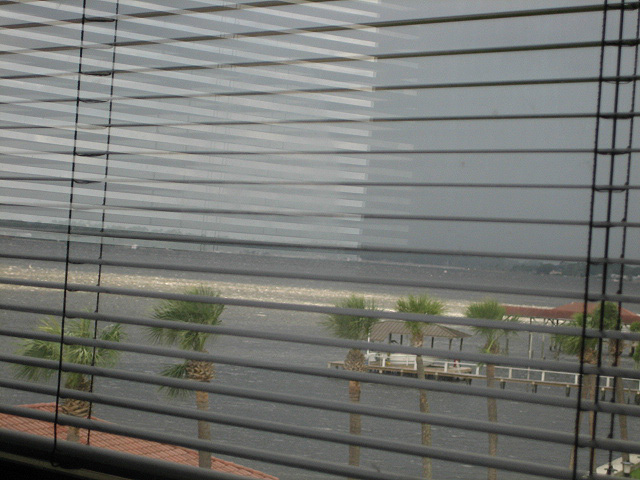 That bright streak is a line of sunshine on the whitecaps that were being whipped up by the gusts. Then it got darker. 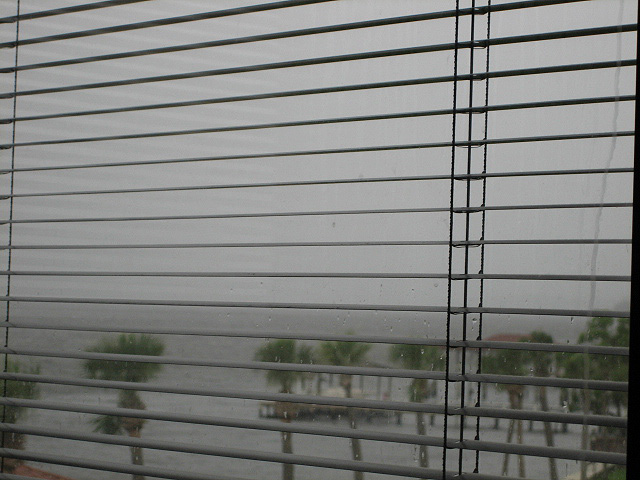 My sister and I popped down to the other cafe at the hospital and picked up some utterly unremarkable chicken fingers and fries. Since my mom was more and more mobile as the evening progressed, we all decided that no one really needed to stay with her overnight this time. So we left my mom and my other sister and headed out between 8:30 and 9 Monday night. We got a wave from the royal box – if you look, you can see the outlines of my mom and sister. 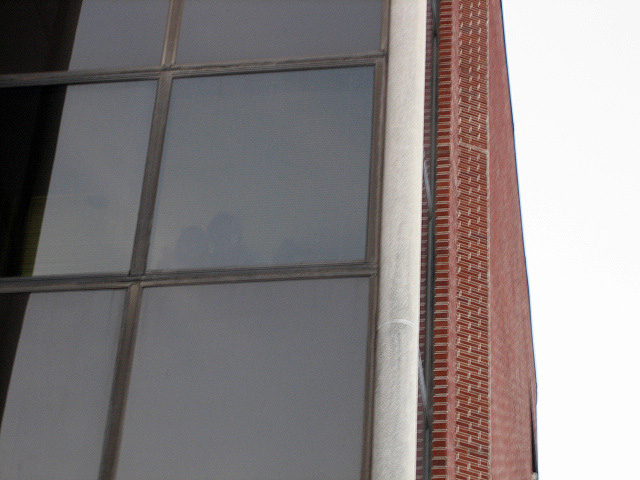 The skies had cleared somewhat, and the sunset was lovely. 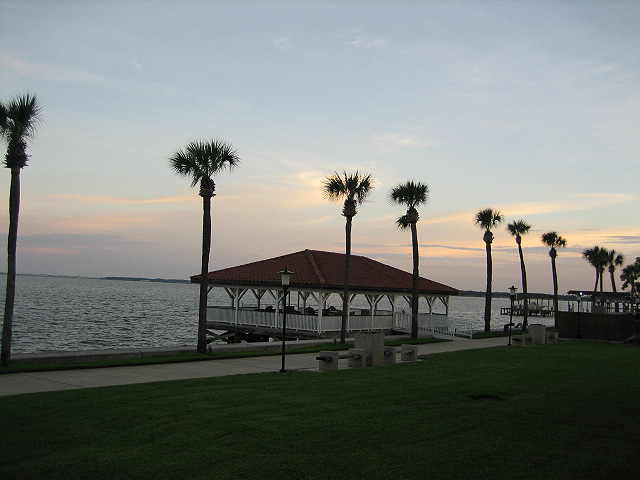 I didn’t sleep that night as much or as well as I should have, but I had a lot to do, having just spent a day at the hospital. Tuesday dawned, and we waited…waited…waited for the doctor to make his rounds and get mom signed out. Once he did, I zoomed off to pick her up and we made dinner plans on the way back. My other sister had called , and I told her to come on over, bring her boyfriend, and we’d have steaks.

To grill a good steak – or several good steaks – you must of course have fire. 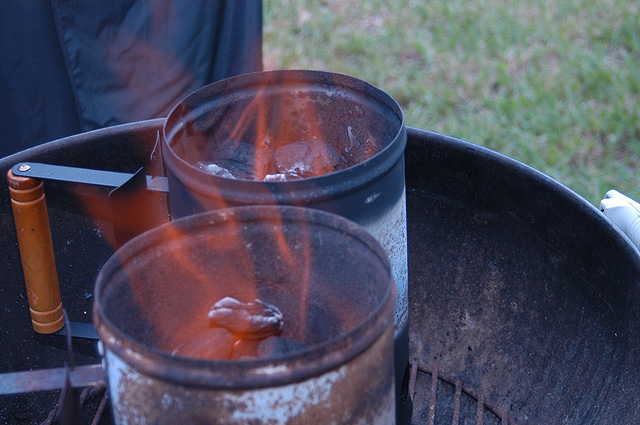 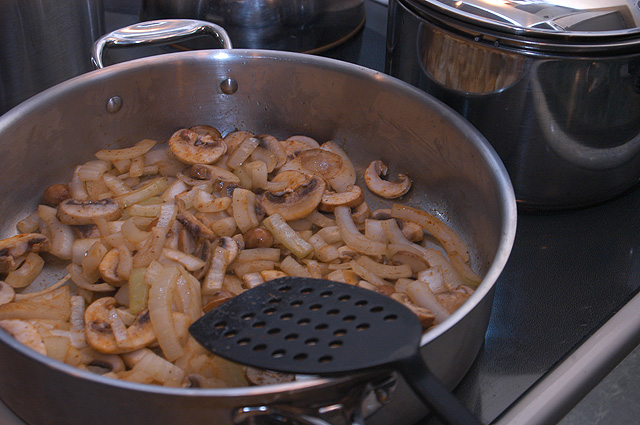 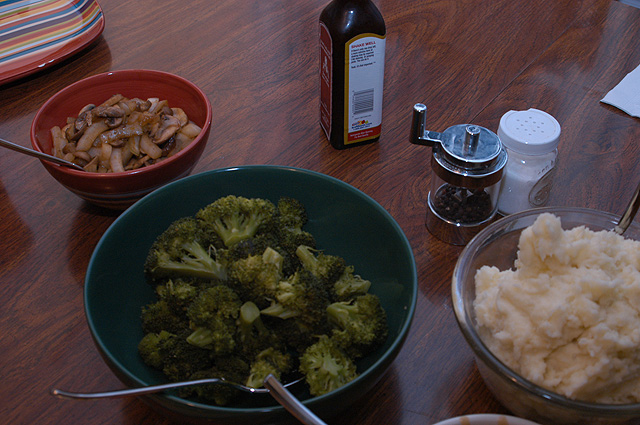 What’s a steak dinner without a potato of some kind? Mashed with butter and heavy cream this time around. Some excellent gravy made in the pan from the sauteed vegetables. 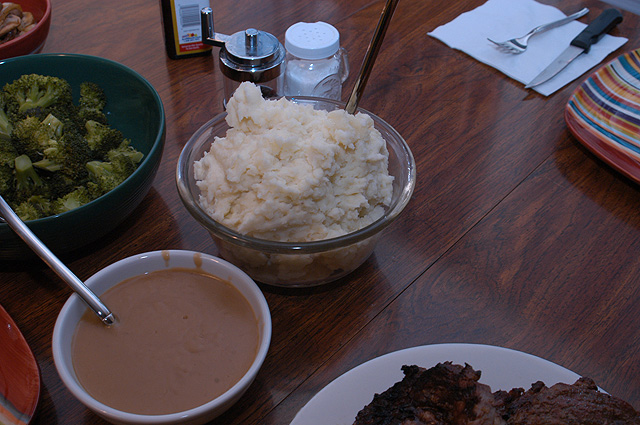 And, the star of our show: steak. 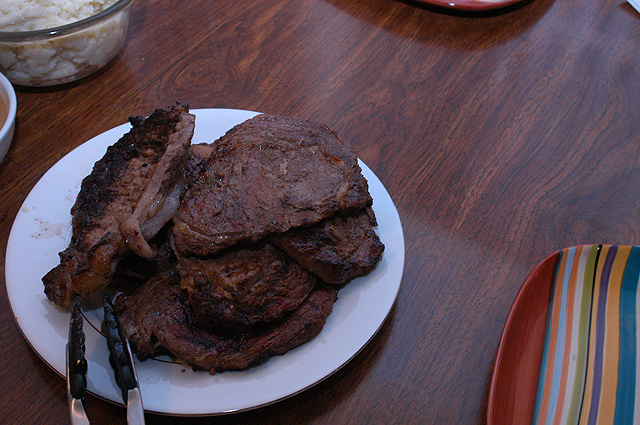 There you have dinner for five. 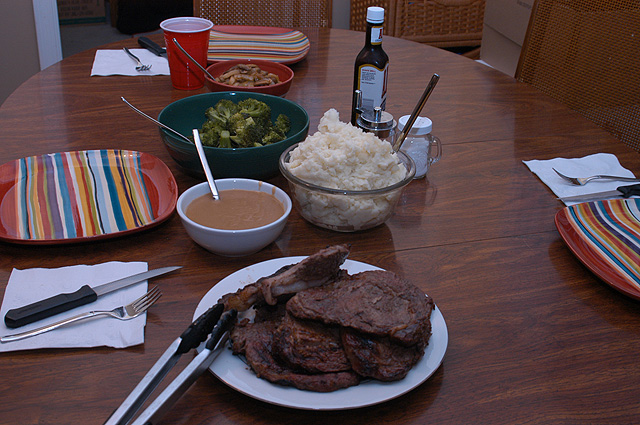 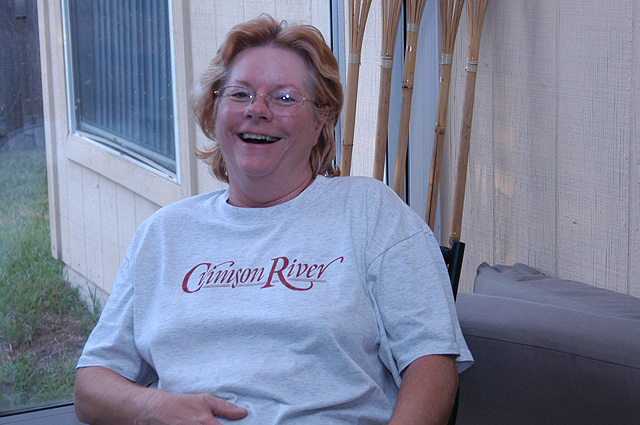 One sister took some of that homemade strawberry ice cream to go. I still need to come up with a capuccino ice cream for her and a pecan praline for a dear friend. Perhaps next week I’ll experiment with those as I work on making and canning my tomato sauce and getting some pizza dough made and frozen.

Our cost for the festivites Tuesday evening. There were leftovers of everything.