For the past week, I’ve been trying to avoid eating through the tube. For the most part, this has been pretty successful: I’ve not had any formula for several days now. instead, I’ve been eating ice cream, soup, and runny mealy foods like grits and cream of wheat.

Last night, highly frustrated with the tube and the associated nastiness that goes with it – such as pieces of skin that pop out from around the incision as it continually tries to heal itself, which cannot be removed until they dry up and separate on their own, for instance – I decided that I really, really wanted it out. As soon as possible. The only way this is going to happen is if I can take in enough calories that I don’t lose much further weight and send myself precipitously toward malnutrition. As faithful readers will know, the tube has been my companion since September of last year, and was the only route of eating for me until just last month.

The problem, of course, is the food. My jaws are not strong enough to eat a number of foods, and the muscles get quite tired very quickly. And then there is the entire issue of my mouth drying out too quickly and not being able to control the food so as not to have it adhere to the top of my mouth or get caught up between gum and cheek. My hunt lately is for things that are soft enough for me to make my way through, moist enough that I don’t need an entire bottle of water to get it down, and healthy enough that I’ll get the nutrients I need without having to fall back on the formula.

Thinking about it in the afternoon, I decided that some fish would be nice. The evening’s menu:

Tilapia filets, pan-seared, with a chile-lime butter
Steamed zucchini
Corn shaved off the cob
Salad (for the others – salad is a bit ambitious for me at the moment)

I ate almost all the zucchini on this plate, about a third of the filet, and some of the corn. Corn presents a challenge because of the skin and the individual kernels that have to be controlled. 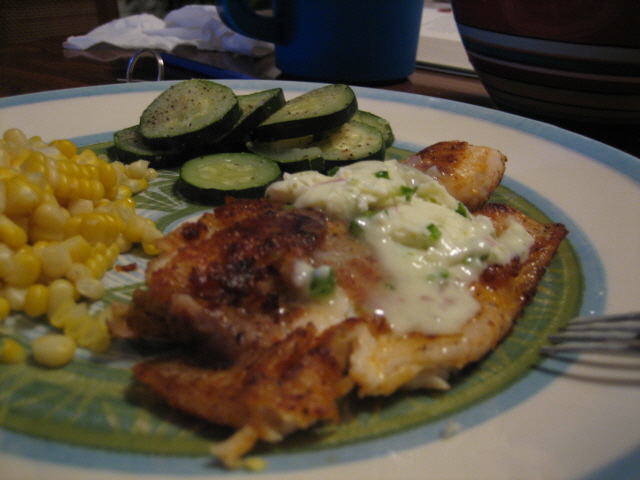 My taste buds are still not back to where they were before, most likely because of the continued healing and the granular tissue that covers parts of it. This is why I opted for a spicier butter for the fish, to ensure that something got through. It was all quite good, even with my limited sensations. The filets were dusted with salt, pepper, and paprika on both sides prior to being seared in a saute pan with some light olive oil.

Mix all ingredients together thoroughly. The butter can be made days in advance. I made this shortly before dinner, then put it in the freezer to firm it up while things were cooking. A spoonful of the butter went on the seared filets as they were plated. The butter would also go well with chicken.