Boring spread, but simple enough in a household where nothing is in order and probably will not be in order for a long, long time. 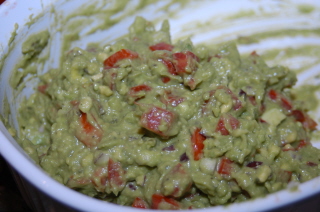 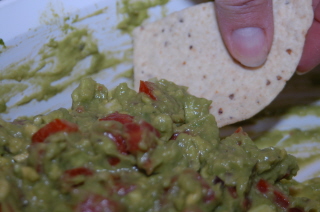 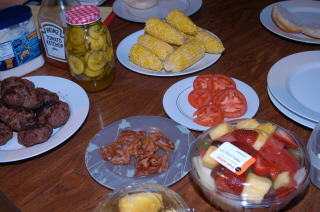 Sounds like something out of a horror movie, doesn’t it?

I’ve been painting off and on for the past two days, in between working, errands, replacing light bulbs, doing some minor repairs, installing a cat door, and so on. But let me say that the walls are not dripping. They are, however, showing the signs of a paint in progress. Sunday I went out and picked up wallplates based on the choice made from the samples I had: solid brass, but with a brushed silver-like finish. They look great against the green tea paint in the foyer/living room, and just as great against the butter cookie/cocoa colors that will be in the kitchen when I get there.

Sunday night was also a night for the first cooking in the new digs. Simple fare, since unpacking is still in progress and the place is in a bit of disarray. Hamburgers, grilled out by the pool. I tossed some bacon in a disposable tin and grilled that as well. Other items on the menu: fresh fruit, sliced tomatoes, corn on the cob, homemade bread and butter pickles, and guacamole. I have pictures of this food, but unfortunately cannot put my hands on the data cable for my camera at the moment, so the upload will have to wait since the memory card from this camera does not fit in the memory card slot on the laptop. use your imagination for now.

I will say that I tried everything, including tasting one of my pickles for just the second time since I’ve made them. Part of a hambuger, several slices of tomato, a few nibbles of cheese (felt a bit like a mouse on this part, I must say), a touch of the guac (the first I’ve had since I started making it again lately), and what I consider to be my crowning achievement of the night: half an ear of corn, on the cob. I know I’ll be paying for this later, giving my jaws a workout like that, but it was worth it. It’s early bicolor corn, but it was just as sweet as it is during the summer months. No butter, no salt – just as is. Wonderful.

As I told a dear friend of mine, who unfortunately had other plans for dinner – unfortunate for me, that is, as the dining company she kept is quite worthy – there’s nothing quite like grilling out by the pool, sun just setting, a few clouds skittering across the sky, Venus rising, a bit of breeze touching your face now and again…

Follow all that by a good bowl of ice cream about an hour later, and a fine evening of dining. I wish I could say that about the rest of my day’s eating, but there was little of it. I’m trying to be better about that, but I get so busy doing things that by the time I realize the time and think I should eat, it’s getting rather late in the day. perhaps as things calm down from the move and I begin to cook more regularly again, this will get better.