Have you ever seen those behind the scenes, or “making of” shows, where they detail the making of a movie? In particular, if you have ever seen a montage of a director calling out “Action!” “Action!” “And…action!”, then you’ll be in familiar territory if you go to a screening of M:I III.

As with all reviews, this contains spoilers. If you have already seen the movie, or just don’t care, read on.

END_OF_DOCUMENT_TOKEN_TO_BE_REPLACED

Something I neglected to mention about the other night’s cooking expedition: cookies.

My mom likes white chocolate macadamia nut cookies. My sister wanted some chewy chocolate chip cookies. I decided to do both. 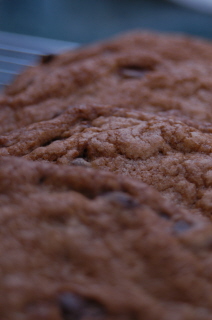 Everything seemed to go so well. Creamed together the butter and the sugars for each. Sifted together the dry ingredients, and slowly incorporated those into the wet after adding the egg and vanilla to each batter. Chilled the dough.

And yet, something went awry.

In both cases, the cookies spread much more than they should have. Instead of being slightly puffy, nice and chewy, they became flat disks that were crispy instead. Tasty. But crispy. Not what I was after.

I’m not entirely sure why this happened, unless the creaming incorporated too much air into the dough, or the silpat caused the spread. The next batch of cookies is going into the oven on parchment paper, to see if that has any effect on the amoeba-like spread of the dough as it bakes.