I spent my Saturday in a bit of a self-enforced “vacation” day. That is to say, I did virtually nothing work-related all day. Since Saturdays are historically slow support days anyway, this is not a huge blow to the ticket system, and although there are always numerous systems-related things I need to get done, nothing so urgent that it couldn’t wait a day. And since my right hand (wo)man is going on vacation this coming week, better for me to take that break now.

Instead of working, I spent the day out and about. First up: the local farmer’s market.

For those who may be here but who have never visited the market, it’s not really a “market” like they have in some cities, with multititudes of booths and a tremendous assortment of good. This is, after all, Jacksonville. However, there is a good opportunity to get some great produce, and you might just find yourself holding up a strange vegetable and asking yourself just what the heck it is.

I went to the market with my mom, as she wanted some silver queen corn, and a lot of it. She likes to shave and freeze it, for those dead of winter nights when you need a touch of summer in mind. This allowed me to introduce her to some things that she’d never seen before in their unprepared state (and in some cases, had never seen before, period): jicama, chayote, yucca, tomatillos, cactus, dried chiles like guajillos and chiles de arbol, tamarind pods. Of course, there were all the other things we know and love, too: tomatoes, beans, canteloupes, vidalia onions, mangoes, papayas, cherries, and quite a bit more.

One of the best things about going to the market is that you can ask the seller exactly where the produce originated. The corn? Ocala. The watermelon? Jesup, Georgia. The beans? Lake City. I can’t think of anything we saw that actually came from this city other than the shrimp ($6/pound, head on), which was from Mayport. I stuck my head in the guy’s cooler to give it the smell test, and it was like breathing in ocean air: fresh and briny, so we picked up a pound as it was only going to be us for dinner.

The rest of our haul:

Clockwise from the left, we have fresh snap beans (pole beans), over a bushel of silver queen corn, raspberries, sweet potatoes, fingerling potatoes, and sugar plums. 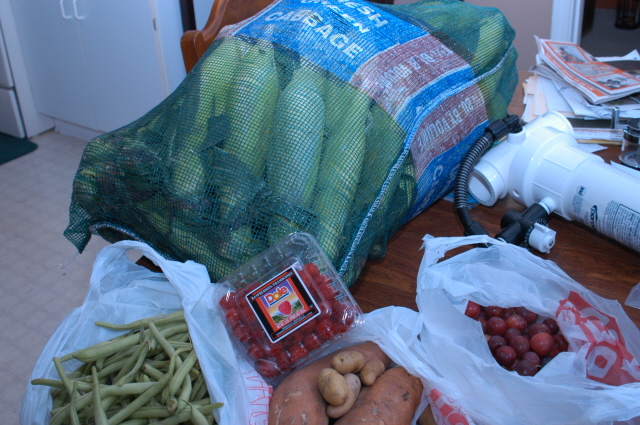 Left to right, we have pickling cucumbers (as my sister ate the last of the bread and butters last night and made a request for more), canteloupe, raw orange blossom honey, regular cucumber, fresh vine tomatoes, mango, and blueberry honey (from NJ). 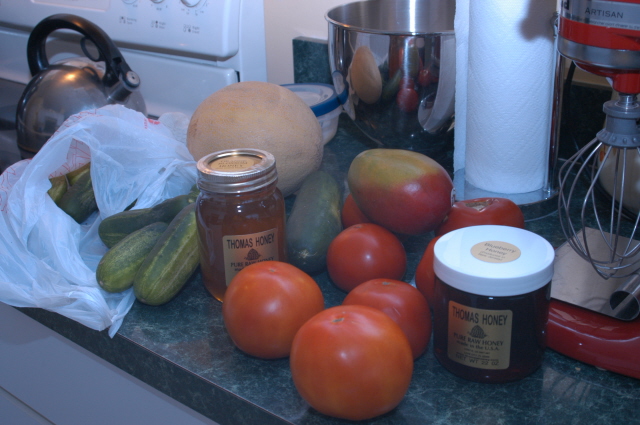 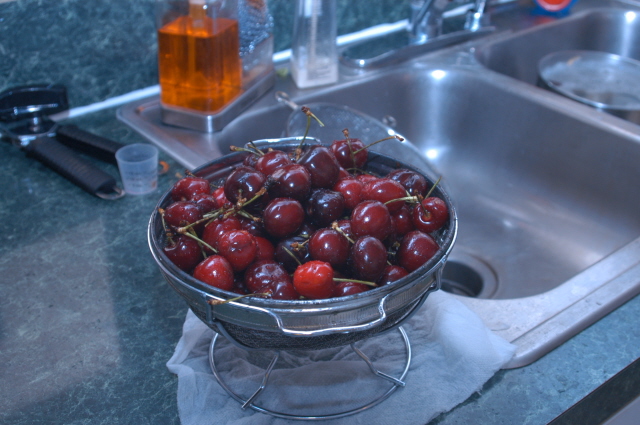 Missing photos: the shrimp and the watermelon. All of it is fresh, all of it smells wonderful, and it’s dirt cheap – the most expensive thing we purchased today was the corn: $12 for that huge bag. The honeys were $5/each, and the rest? So inexpensive as to be laughable. The only thing we missed were the peaches. We arrived at around 10:30, but because the market opens at 6 AM, the peaches were long gone by the time we arrived. Next time, an earlier visit is in order, to ensure we’re able to get some of those. I was tempted to buy a 30 pound bag of vidalias, and bunches of chiles, but decided that I should figure out a place to store them first, then bring them home. For the purposes of our Challenge, the market will work out well. Since we’re heading into high summer, it’s a great bounty to be had, and if you’ve not checked out your local market, you should.

Next up? A trip to St. Augustine.

For a long time, I’ve wanted a dutch oven, as it’s very handy for braising and longer-roasting items. I’ve never gotten around to getting one. Until today, that is. First I had to stop in to see my kitchen supply dealer, though, to pick up a corn shaver – after all, it can be done with a knife, but do I really want my mother doing that to an entire bushel plus of corn? Nah. Off I went, and lucky me, she had just what I needed, plus a cast iron dutch oven that I decided I needed as well. Loaded up with those, I took myself off to Le Creuset and picked up an enameled dutch oven – the clerk, when I walked in and walked directly to what I wanted, commented that I seemed to be on a mission. I resisted the temptation to quote The Blues Brothers and instead agreed with her that I was indeed on a mission. A mission to get what I needed and get out before bankrupting myself by purchasing one of everything.

Thus laded down with kitchen goodies, I was off again, this time in search of a ravioli cutter. It’s funny that you can find the preformed cutters, but it seems the handy rolling cutters are no longer de rigeur for some reason. Since I had to (almost) pass it anyway, I stopped in Williams-Sonoma and found one. I also found a Shun chef’s knife that is just lovely. And since you can never have too many sharp objects in the kitchen, that had to come home with me as well.

Where to go from there? To the bookstore, of course. I’d been looking at this for awhile, trying to decide whether or not to get it. It’s part travelogue, part anthropology, part cookbook, and absolutely gorgeous. Part of my personal challenge (little c) to go with the overall Challenge (big c) is to try and get the fam (and friends) to eat things other than those they are used to – to be a little more adventurous without getting so far into foreign territory that their instincts to turn down something override their curiosity about it. I own quite a number of cookbooks, and use many of them to get inspired, and figured this would be a fine addition, so I picked it up today. One I looked for and did not find was this one, which I’ve decided I’d like to have as well. I’m well aware that most of the people around me will find many of the items in both books to be something they would not eat, but my hope remains that I can slowly convince them otherwise. I also picked up a few more books, including this, which I’ve wanted to read for awhile, and this, because you just can’t ever have too many baking-related books.

I had fully intended to just go back to the house and start pulling the heads off those nice shrimp, but thought as I was unloading that it might be nice to take a trip out to the beach.

The day as it lowered into evening was simply brilliant, but the beach was almost deserted. 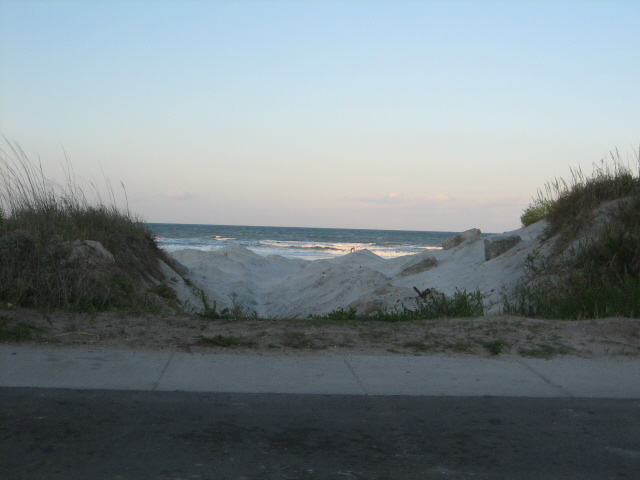 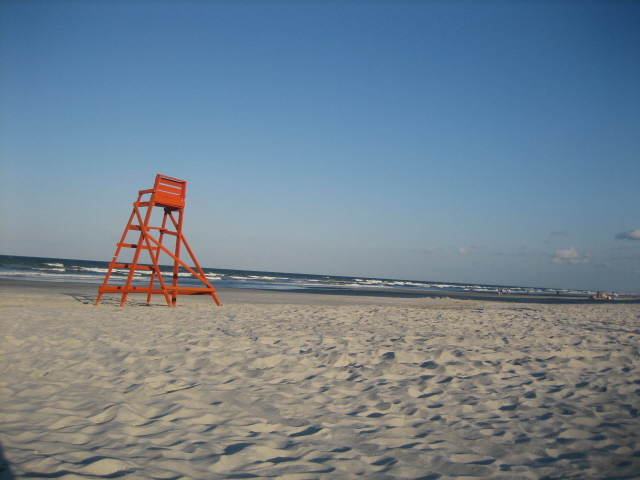 The water, churned up still by the passing of Alberto, pounded against the shore. 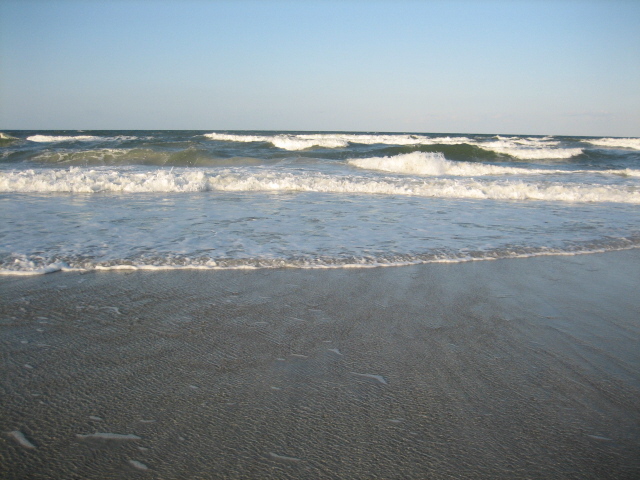 Very few people were in the water, which was pleasantly warm even for this early in the season, because it was quite rough and the tide was pulling out. A riptide is nothing to get caught in. I found a crab and played with him for a minute before he quickly tired of me and skittered back into the surf, and then I waded through the tidal pools left behind by the receding waters before hitting the road to go home. 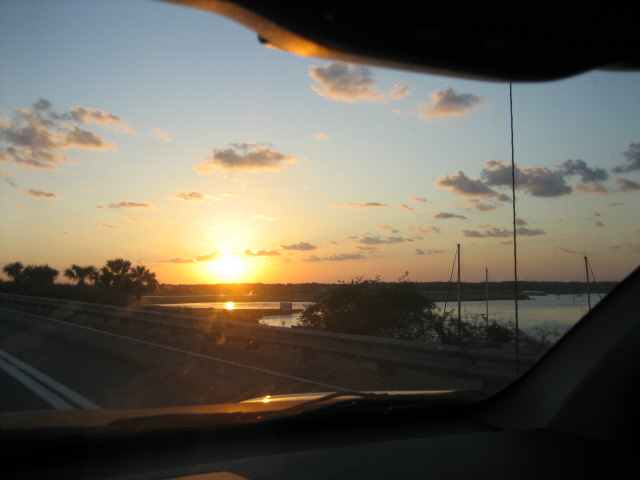 I don’t think anyone could ask for a better day, really. A day like that makes me glad to be alive.