“What are we doing tonight?”
“Tonight, we make soap.”

Not really, although I’ve thought that making soap would be an interesting thing to try. No, tonight was a return to a more down-home type of meal: pot roast.

Traditionally, pot roast is made with the tougher cuts of meat, because these are the cuts for which the process of browning and then braising is really made. Turning a not so tender cut of beef into something tender enough to cut with a fork is a terrific endeavor.

As I’ve mentioned previously, I picked up some boneless chuck roasts at Costco on the recent foray into the wilds of warehouse shopping. Two per package, about 2.5 pounds each: perfect for a comfort food kind of night. Add in some real whole grain bread, freshly baked, and you could almost imagine it was a cold winter’s day instead of a 90-degree sauna outside.

To begin any good pot roast, if you have the time, browning the meat is essential. If you don’t have the time, and you’re doing this in a crockpot/slow cooker, it will be just as good, but there’s something about that sear…

Where was I? Oh yes: first steps. Browning the meat in a good solid pan. Cast iron works well, or, if you have one on hand, an enameled cast iron dutch oven is even better. Seasoning the meat before browning is definitely in order. Some people like to go nuts with this, but for me, simple is better: salt, pepper, a slight touch of cumin. After being seared in a couple of tablespoons of canola oil, the meat is removed and some onions (Vidalia around here, as they’re in season) and a peeled and cut carrot go into the pot to saute for several minutes until soft but not mushy. After that, deglazing the pan. Since we’re keeping things simple for purposes of The Challenge, I elected to go with beef broth. Normally, I might use a combination of beef broth and a medium bodied red wine. After scraping up the fond (those are the browned thingies on the bottom of the pan after you go through this searing process), the beef went back into the pot, right on top of the onions and carrot. I added more beef broth until the liquid level was about halfway up the side of the meat. 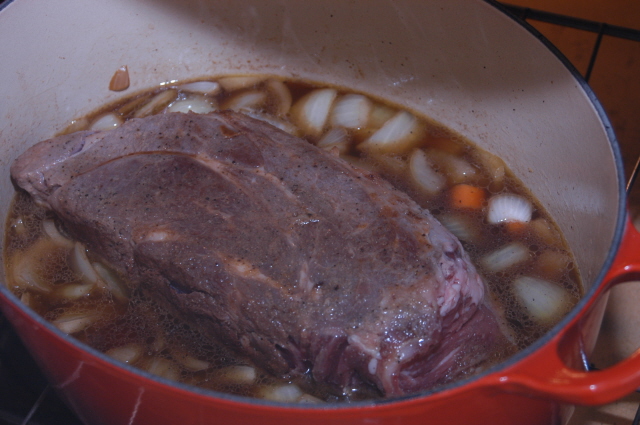 The searing isn’t perfect on the ends, no. But the beauty of this is that is doesn’t have to be. Since most roasts are oddly shaped, getting a good sear on the maximum surface area possible without spending a ton of effort in the process is the goal. 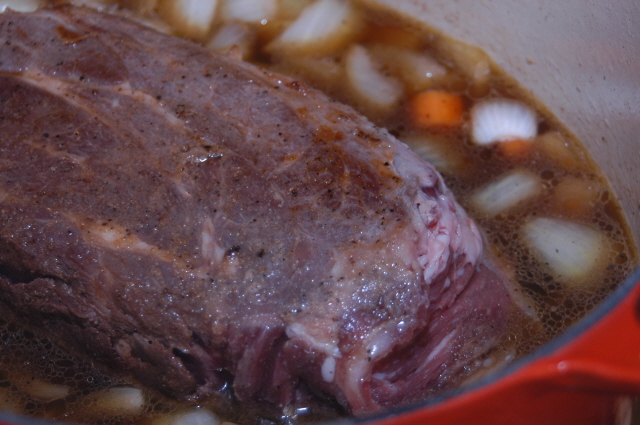 Lid on, and it’s into a 250 degree oven. For hours. The lovely thing about braises is that you get to throw everything together, put it in, and then leave it mostly alone. I turned the meat about every hour, and about half an hour before it was done, tossed in some potatoes and a couple of carrots. 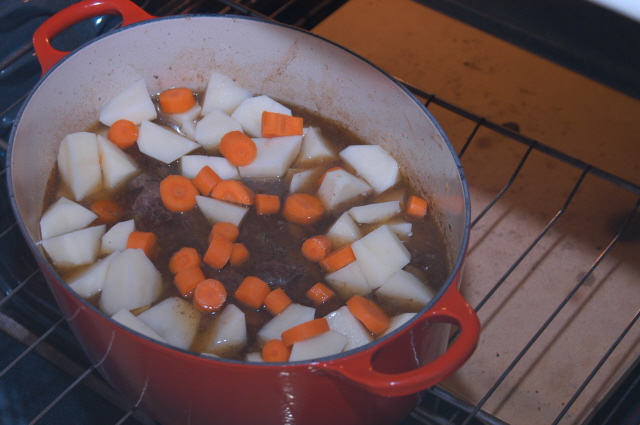 Another half hour or so, and the end result is ready to come out of the oven. 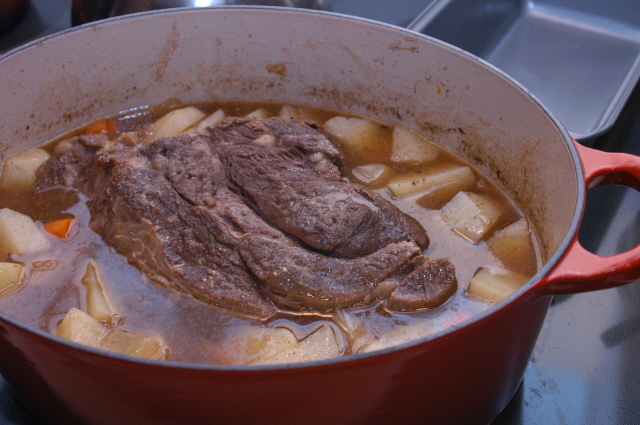 In the midst of all this, I also made some whole grain bread. The problem with most “wheat” bread is that it’s really just white bread with a little wheat flour tossed in. This is not horrible – I am, after all, a huge fan of just about any kind of bread, white included. However, my sister had requested something healthier but suitable for sandwiches. Ask and ye shall receive.

The dough is whole wheat flour, sunflower seeds, walnuts, honey, salt, and a touch of olive oil. And yeast, of course. Halfway through the first rise, it looks a little rough. 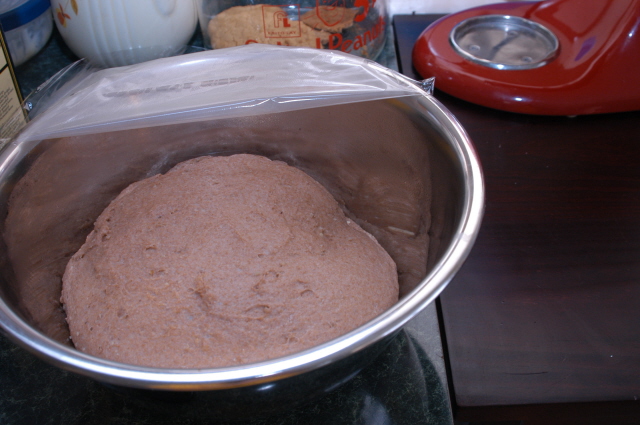 After stretching, shaping, and set for the second rise, though, things are looking up. 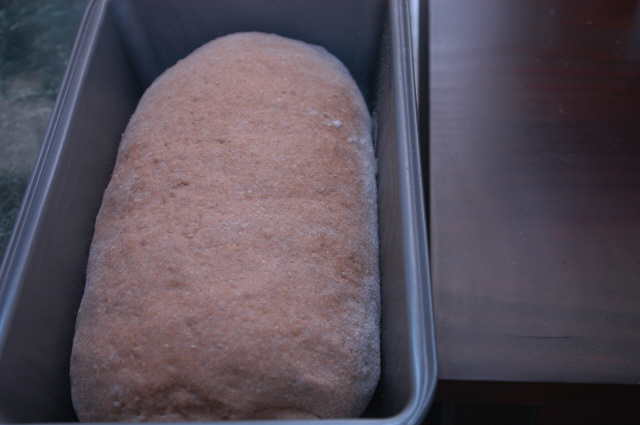 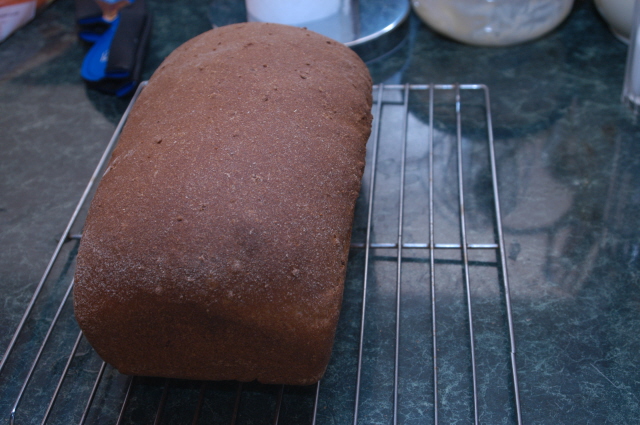 The crust is not rock-hard, and the loaf gives a bit when pressed, just like a regular old sandwich loaf. A taste tester took over after the bread had cooled a bit. And because everything tastes even better with butter… 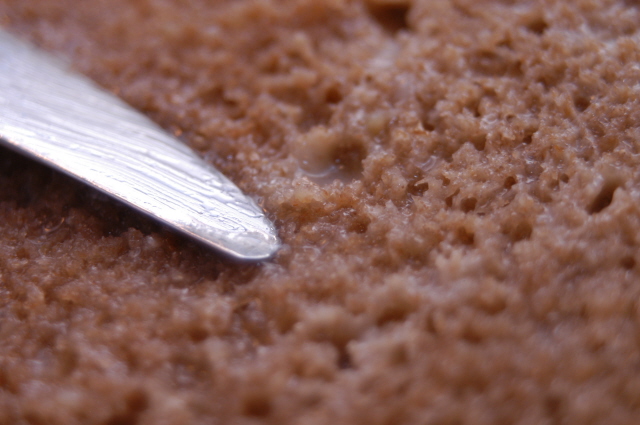 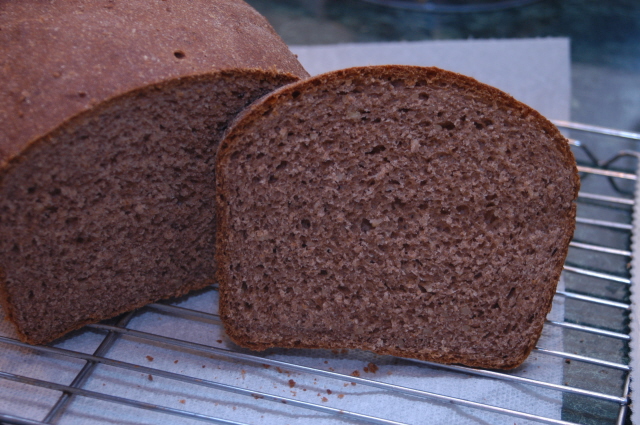 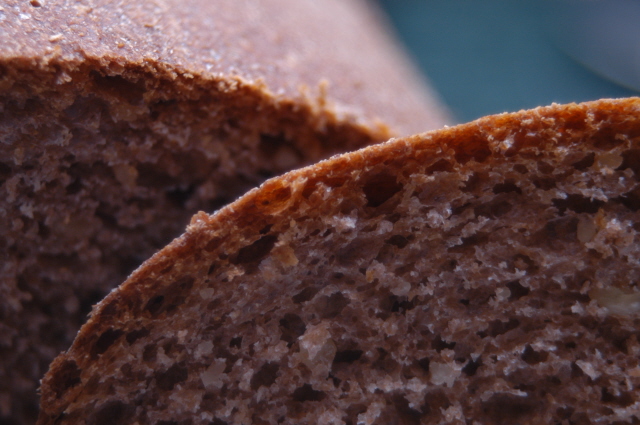 Put it all together, and you get something that looks like this, if you were dining outside. 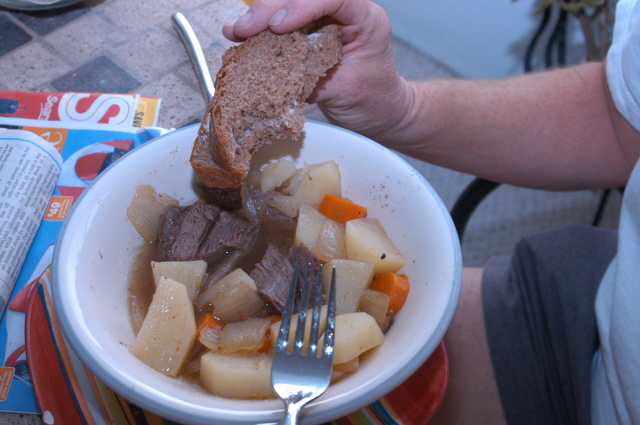 So what’s our cost breakdown for this hugely satisfying meal?

The leftovers for this will last a couple of days, so the actual price per diner will be significantly less than the first round indicator.

Leftovers, you say? What can you do with pot roast leftovers?

Beyond just eating more of the meat and vegetables with a slice of buttered bread, there’s nothing like a good roast beef sandwich on homemade bread with a little horseradish and perhaps a slice of red onion (or vidalia) and fresh tomato, sprinkled with some freshly ground black pepper. If you were someone unlike me who was currently eating sandwiches, that is.